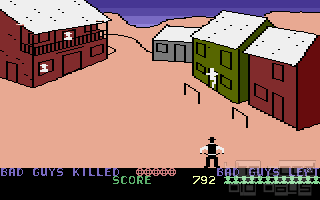 The myth of the 'wild west' is full of hero figures, usually referred to as 'lone rangers'. All alone they fight all kind of evil (bankrobbers and of course Indians), always with a hand on their gun. That's the true American dream: riding through the prairies, spreading 'true justice'.

The title hero of this game is one of these persons. Kane (at least I guess that's his name) is the sheriff of a small city near the frontier. And you're taking over his part on a completely normal day.

First you go out with your bow and shoot some birds. Just for sport? Or does it have some deeper purpose? It obviously has because the number of birds you shoot is directly translated into the amount of bullets you have for the next level (more about this later). How Kane exchanges birds for bullets? Is that important? I mean, come on, it would look a bit silly if he was shooting arrows at swarms of bullets!

After he has 'refueled' his revolver this way, Kane heads off to town. As usual, the xy gang (insert your favourite name here) awaits him. Cowardly as they are, they hide in the buildings and only show their heads in the windows and doors from time to time.

Now Kane can show where his true strength lies: fast and accurate shooting. Not distinguishing between the different shadowy figures (there could be 'innocents' amongst them after all...), he brings them all to justice in front of god. Heathen souls might describe this as 'killing', but that's of course nonsense!

When the city is clean again, Kane takes a well-deserved break and relaxes a bit with his favourite sport: shooting birds. And it all starts again...

These two 'levels' are actually fairly well done. In the first one (bird shooting), you stand on a fixed spot and only control the direction of your shot with the joystick. That is quite easy since both the birds and the arrows are flying very slowly. A good start into the game.

The second one (shoot-out) is quite a bit harder, mainly for the simple reason that the gangster actually defend themselves. When you stand around too much, they'll shoot you. So have to keep moving and target the figures which are popping up constantly at the same time. That's a bit of a challenge actually - thrilling.

The limitation to only two levels is a bit too repetitive unfortunately. Kane is one of the games which were 'cut' in order to make it compatible with the C16. The C64 version, which has two more levels, would have easily fit into the Plus/4, but for the sake of a bigger market, the company decided otherwise. Just like in so many other cases... 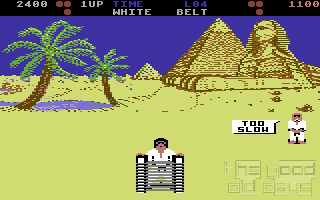