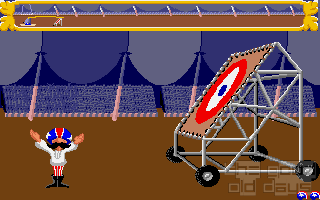 Gather 'round, the ringmaster is welcoming his guests. Sadly, fewer and fewer people find their way to the Big Top o' Fun these days, so the circus is in serious financial trouble. As a last straw, the ringmaster has received credit from a shady loan shark. If only he had read the fine print: payback is today! There is only time left for one single circus show in order to make enough money and pay it back. The loan shark already has other plans for the circus grounds and so he sends Fiendish Freddy to sabotage the show and ensure that no money will be made.

Fiendish Freddy’s Big Top o’ Fun is best described as Summer Games in the circus round. The show consists of six numbers which have to be performed as flawlessly as possible.

Four jumps from increasing heights while the targets become smaller at the same time. The latter being a tub, a bucket, a hollow block (!) and a glass of water. To make the number more interesting, you also have to perform different poses in mid-air. Fiendish Freddy tries to blow you from your trajectory with a giant ventilator.

Riding a unicycle, a sea lion throws different objects at you which you have to keep in the air juggling. But of course, Fiendish Freddy makes an appearance. Bombs should be thrown back as quickly as possible. The missile, on the other hand, you have to keep juggling; it mustn't fall down. And then there is the baby gone astray which belongs back in its stroller.

All the way up, just below the roof, you have to jump from rope to rope. The right timing is essential to jump the hoops. Though if you want too long, Freddy will take out his scissors.

A rotating board full of baloons and your assistant is the target. Using the available knives, all baloons have to be popped. The assistant shouldn't be hit, of course, but it isn't easy, as Freddy is constantly obscuring your vision with smoke grenades.

Cross the rope and keep your balance. But fend off those razors which Freddy shoots at you. Better hurry, because otherwise Freddy will blow you off the rope with a cannon.

You control the angle and the target's position. This both depends on the amount of gunpowder your assistent has filled the cannon with. If you take too much time, Freddy comes along with a giant cork and the number explodes right there.

After each number, a jury will rate your performance and award money depending on success. Only by mastering all numbers, there is a chance to raise the money to balance the credit.

On the whole, Fiendish Freddy’s Big Top o’ Fun is a very hard, but nevertheless entertaining game. The individual challenges are varied, graphics are beautifully drawn and overall length is suited for a short diversion. The black humor inherent in the ways the circus performers shuffle off this mortal coil bring a smile to the player's face even in failure. Allowing up to five players, it is an amusing pleasure for an evening with friends. The DOS version loses some points because of its music. My ears are still bleeding from this PC speaker blaring. This is where the Amiga version is clearly ahead.

Oh, I remember playing this game and loving it! I honestly thought it was called "Circus Games".
Reminds me of a smiliar game, located in a prison and having a comical style like "North & South". Something about peeling potatoes and trying to escape. Geee... "Western Games" suddenly pops to mind as well. Thanks for the review and the trip down memory lane!