Curse of the Azure Bonds
for PC (DOS) 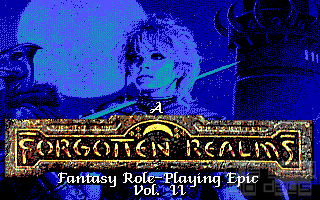 This game continues where the first game left off, though it's an entirely new adventure. You can import your characters from the first game for some personal continuity, but you can start fresh characters, too. Your heroes have been branded with "azure bonds", magical tattoos that seemingly randomly control their every move and action. It's clear from the beginning that your main quest will be to find a way to remove the bonds, but there's much more to be discovered.

One minor gameplay change that will likely be much appreciated for fans of Pool of Radiance is the addition of the "Fix" command in camp, which automates the healing process (memorize cure light wounds, rest, cast cure light wounds, repeat…). This is a time saver and removes a lot of the tedium from the dungeon-crawling experience.

Herr M. (2019-09-12):
Speaking of unique stories: I really liked this one for the unusual setup. No save the princess/kingdom/world scenario… no simply save your skin from that nasty curse. As far as I remember you had a bit of freedom in which order you wanted to break the bonds. Though come to think of it the prequel, Pool of Radiance was kind of generous this way too.
[Reply]