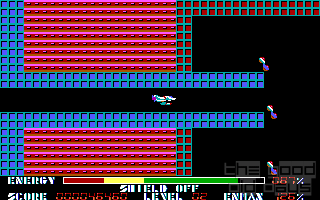 Thexder is an action side-scrolling platforming game where you play as the eponymous fighter robot. The goal is to get from the start of the level to end of the level. Sounds simple enough.

To get through each level, you'll need to get through hoards of enemy robots, all programmed with the singular purpose of destroying you. To help you survive and navigate the levels, Thexder can transform from a humanoid-like form into a plane and back at will. Each mode gives you a specific advantage and weakness trade-off. When in humanoid mode, your attack laser homes in on enemies, but your mobility is restricted. When in plane mode, you are no longer bound by gravity, but your laser shoots only in the direction you are facing, and you are constantly propelled forward.

There's no way to sugar-coat it: Thexder is a difficult game. It's very easy to turn a corner or go into a new open space, just to get swarmed by enemies with no way to escape. And when you get destroyed, that's it – you have to start over from the beginning of level one. No checkpoints and no extra lives.

To succeed, you'll need to take a more patient approach to exploring the levels. But the real trick to understanding how to play Thexder is learning how to manage your energy. Energy counts as both your life meter and ammo supply at the same time. Take damage from an enemy, lose energy. Fire your laser, use energy. Activate your shield (don't forget about the shield), sacrifice 10% of your energy up front to prevent damage which would otherwise cause you to lose even more energy. The other side of this energy equation is that destroying enemies recovers energy. Some enemies restore greater amounts of energy than others, and destroying specific rare enemies not only restores your energy but also increases your maximum energy.

While the gameplay is unique among platformers, the game does suffer from unusual and, at times, frustrating controls. It can take a few plays before you really start to get the hang of just controlling how to turn into a plane and back, since the mechanism is context sensitive (press the direction opposite from the one that Thexder is facing, down if you are in humanoid form). Then, after you've got that down, you can still find yourself frustrated when Thexder's homing laser just won't hit what you think it should (hint: it quickly rotates between all nearby targets, including those on the other side of walls).

By today's standards, the graphics definitely show their age, with the backrounds of each level being just black space and the walls of the levels being repetitive blue blocks with some red thrown in here and there for good measure (or reverse, lots of repetitive red with some blue thrown in). The sprites and animations aren't bad though, and do a good job of keeping your eyes focused on the enemies.

The sound effects are just a bunch of beeps, but you know what the sounds mean when you hear them. The music is actually pretty good, though you'll probably get tired of the song that plays during the levels over and over.

If you have a choice, I recommend playing Thexder on a Tandy – or if you're using Dosbox, edit the configuration file to set Dosbox's machine to Tandy mode. Thexder's graphics do have more colors in Tandy mode than in the normal EGA mode available to non-Tandy machines. The game also has more sound channels on a Tandy, giving the music, which includes a rendition of Moonlight Sonata as the theme song, more character.

At first, the game can feel like a fairly standard fast-paced action game. However, once you start to understand the energy-management and survival aspects of the game, Thexder takes on a life of its own. It turns into something more deliberate, where the goal is to figure out how to get through a level – slowly and carefully – using a minimal amount of energy while also searching for ways to increase it. If you have the patience for it, Thexder is challenging, fun, and very different from most platform games.