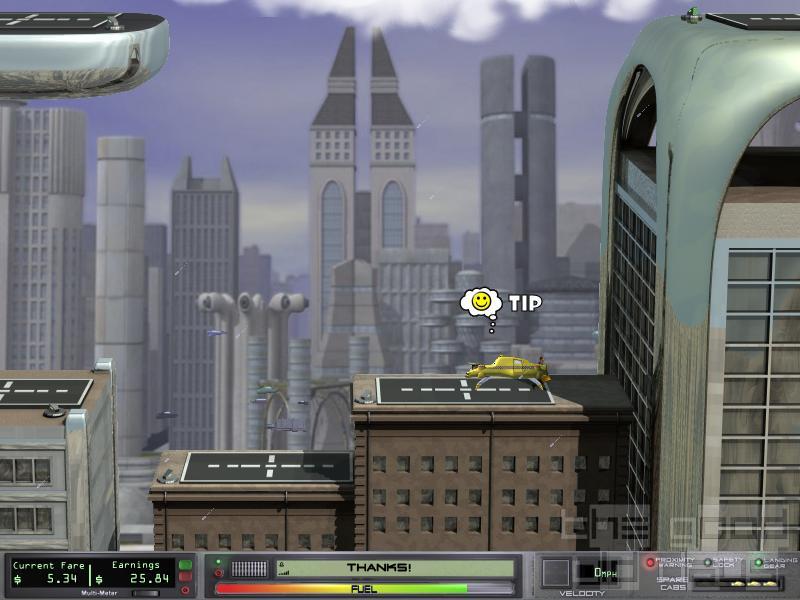 In the old, golden days, video games where thematically almost exclusively catering for a single target audience: male adolescents. Logically, some fantasy themes were recurrent: saving the earth and all of humanity or even the whole universe. Those were the goals and challenges of tomorrow's family men. Gaming having grown up, yesterday's youths are now confronted with reality. Those old dreams have been tainted as childish and the games industry now also delivers realism into the formerly well kept play rooms of today. One way of doing this apparently involves simulating every single job, no matter how absurd, and also every single every day activity, no matter how trivial, in a game. Resulting in increasingly obscure products in which the original ideas can hardly be recognized anymomre. Though even in the good old days, us heroes had to take a couple of collateral damage hits and, for example, resign ourselves to the role of a simple taxi driver. The implication being boring drives from A to B, where the highlight of the day is exchanging some gossip with the passengers. Unless, of course, it was Space Taxi.

The player takes heroic control of a floating vehicle, taking every imaginable challenge to transport the innocent passengers safely to their targets through a vicinity full of dangers. Honest monetary reward fills the notoriously short account of the driver, which is then spent on filling up on gas or for repairs. A lonesome cowboy of passenger transport, you try to handle the competitive market of several exo planets in a far future, but without ever meeting the competition head on. All the passengers solely depend on this one taxi. The more heroic the actions, the higher the occasional tip. The passengers' vocabulary is limited to simple phrases which have already appeared spoken in the C64 version in a similar way: Hey, Taxi, Pad two, please or Up, please. Immediately, the signature of genious game designer John F. Kutcher becomes visible, or rather audible. In collaboration with Twilight Games and being the original creator of the first part, he didn't just authorize the second game, but was proactively involved in its making. A whole 20 years have passed before this old concept has been re-animated and re-surfaced in its full glory.

It is actually true: the game has grown up. The first thing which struck me was the wonderfully smooth taxi control. The taxi also finally looks actually futuristic and its colouring is no longer limited by the C64 colour palette. So now, the taxi is tinted in the strong yellow which everybody associates with it. The sound effect of bumping into one of the various obstacles is wonderfully tinny and when the vehicle has been damaged, it will start emitting a large amount of smoke. This makes the taxi all the more lovable, as this science fiction world gets some old school parameters.

Enough of bland realism, let's move on to feeding our excentric gamer mind. There are three planets to choose from, each of which has a different theme. First, there is Metropolys, a future mega city. Then there is Lunar 7, a moon-like landscape with a rocket launch in its final level. Finally, there is planet Xyxylplyx which offers uncharted areas and research stations. The sixth level of each planet only needs to be reached once. Afterwards, a wormhole allows direct access.

Graphically, the simplistic two dimensions found in the first part have been transformed into a pseudo 3D environment. On first launch, I had some doubts whether the partially animated backgrounds and the detailed foregrounds could hinder navigation and orientation. In practice, this is not the case. On the contrary: the high resolution with numerous details are pleasing on the eyes and contribute to the overall atmosphere. Lightening the mood are occasionally rising balloons with bonus items attached which provide the player with gas, money or even an extra life. These goodies are desperately needed in almost 30 levels with rising difficulty level. The first planet only hosts comparatively simple obstacles based on magnetism, winding tentacles or moving platforms. Later, there are also bouncing balls, explosive bombs and cannon balls.

Some levels have been clearly inspired by the original and now shine in new format. The game walks the fine line between remake and sequel: as a pure remake, too many new gimmicks have been added. As a true second part, the grounding towards the original is still too strong in my view. The trusted gameplay has been retained completely and improved in a good way. For a start, the different passengers offer some variety: the business guy, the jogger, the old man and on the exo-terrestrial planet of course also aliens and robots.

Targetting the platforms has also been improved. A large hologram shows the respective number and a big green arrow works as a navigation system to locate the right path. The status bar shows the current destination as well. As the fare is calculated based on the end-to-end time, time to get on or off is also of vital importance. For example, landing your taxi far away from the old man with his crutch, the fare may have gone down to zero even when he only climbs on board. Which doesn't stop the old man from complaining and swearing about the delay.

On the whole, the game comes along with a nice sense of irony. This isn't a dead-serious taxi simulation, but rather a little action game for the lunch break. The only highscore saved is the maximum earnings. The way is its own reward, not reaching the final level. The planets are subsequently opened up and after finishing one, the next planet is only introduced with a short scrolling text. High-resolution cinematic animations are notably absent.

This is where my main beef with the game comes in: the demo is activated into the full version on the fairly high price of $20. You will receive a great and motivating game for it, but this price puts this already 15 year old game in direct competition with the latest and greatest offers of the numerous online stores. One can only hope that this great game will be released non-commercially at some point.