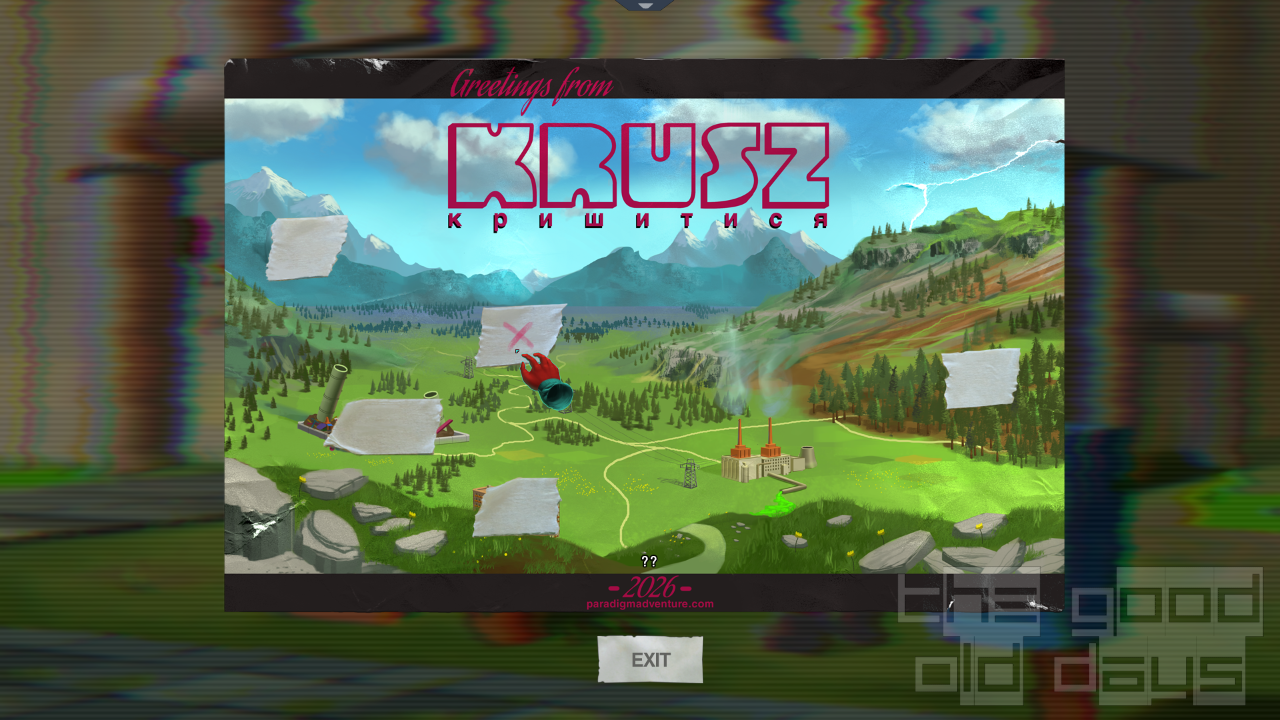 One of the biggest hopes of many parents has to be that their offspring live a better life than themselves (or at least one as good as their own) while keeping up their values, ideals and paradigms. The main reason being that a lot of people conceive the more or less secret wish to live on in their descendants – preferably in an increasingly brighter future. But reality tends to disagree with those somewhat naive ideals, which makes it hard to follow all those noble motives at times. Therefore there is quite a market for all kind of aid to reach the wanted success: From guides in form of book, film or person, over peculiar toys or medical/therapeutic approaches, the options nowadays even start to tap into the realms of genetics. An easily controversial topic, which the adventure game Paradigm chose to deal with in a most entertaining way.

The Dupa-Genetics mega corporation takes centre stage in this and claims to have the answer to each and every question in a future balanced somewhere between Dys- and Utopia. Mainly they take care of the problem mentioned above: Why subject your offspring to mother natures‘ caprices, if all that it takes to create a prodigy child is lend her a helping hand here and there? Just some ever so slight modifications and finally your good son or daughter learns something useful instead of turning into a irredeemable art student. It is just the icing on the perfectly baked cake to also make them slightly more pleasing to the eyes than ordinary brats. Well, at least that is what the infomercials claim.

At first the game’s protagonist – the eponymous Paradigm – does not care about this in the least: All he wants to do with his life is create a couple of ‚fat beatsies‘. For this purpose he furnished a botchy makeshift studio in a forlorn industrial ruin. On top of that even his looks defy almost all of the usual definitions of aesthetics. So he seems to be the perfect antithesis of said corporate propaganda. Those might be the reasons why he does not hobnob with high society, which tends to afford all those super exclusive products, but instead keeps company with people which share his rather easy going way of life.

So, even the game’s setup offers quite a lot of potential for finest satire with its very crass contrasts. And it knows how to use it for some heartfelt laughs. On the one hand the corporation’s agenda seems quite reasonable, because it actually can be quite reassuring to have control over any kind of situation and one or two miracle cures could come in quite handy. On the other Paradigm’s straightforward nonchalance instantly brings you back down to earth by showing you how ridiculously convoluted and neurotic this strive for perfection can become or that most of the people do not even know what to do with all those marvellous gadgets, so they end up misusing them for banalities.

It is really nice that the game does not only rely on some cheap laughter though, but holds up a cleverly designed mirror to our own society. Although the story takes place in a retro futuristic version of an imaginary east european country, you can recognise some similarities to our own lifestyle, which are mercilessly made fun of. Besides the mentioned educational topics there are also themes of increasing individualism, political correctnesss or having troubles with keeping up with the ever faster advances in technology. Thankfully the author shows a certain knack for keeping the criticism balanced, mocking both sides of the medal, so the players do not have to sit through one sided preaching – that is if they are not meant to be laughed at.

To give a context-free example: One quirk of the game is to misinterpret the phrase ‚pick up‘. If you try to use this action on random objects, people or even landscapes you get to hear lots of pick-up lines. At first this seems rather awkward and you might start to worry about how sexist those remarks will turn out. Yet they are surprisingly witty and creative instead. Of course not all of them are that clever, but mostly they are quite hilarious, original and most of all dead on. It is also remarkable that Paradigm is downright human in all those situations, which are usually used for the most tasteless and lamest of lines. He either runs out of words or does not want to stoop to embarrassing low blows.

At the same time this quirk is also sign of one of the game’s weaknesses: Paradigm is a very, very chatty fellow. You will spend quite a lot of playing time listening to his antics, while he tries to describe and explain things. Most of what he has to say is actually quite amusing, but on the long run his monologues, which are often aimed directly at the player, can become quite tedious. At times you might feel slightly torn when entering a new room and finding lots of new hot spots. Do your really want to have each and every one of them described in great detail, or would not you rather advance the plot a little?

To make things slightly worse most of the numerous scenes do not need that many actions to pass through. There are lots of puzzles and problems to solve, but they rarely take more than a couple of clicks, which are often very obvious too. On the other hand there is not an abundance on filler material, on the contrary most of your obstacles rise organically. The puzzles also benefit from either a very logical design or at least just the right amount of hints. This spares the players from frustrating dead ends, which might be a refreshing change for those of us who wish to finish an adventure game without the temptation to looking up walkthroughs online. Even if you should get stuck (which never happened to the author of these lines), you can always fall back to some nicely adjustable helpers (ranging from marking the hot spots up to an interactive walkthrough).

Apparently to compensate for the somewhat easy main path there are a couple of secrets and hidden puzzles waiting to be discovered. Some of them are rather hard but lead to surprising results. Most of them are purely optional and actually do not add that much to the plot, yet they offer a welcome challenge to genre veterans. Just realising that there are there takes a lot of wits, so it might take a second or even third play-through to find them. To give you an example: There is a not so hidden switch lacking any kind of description, whose purpose is not so obvious… until you do some experiments. Its actual function is not all that useful, but it is still very amusing and shows quite some passion for detail.

This passion is reflected quite pleasingly to the eyes in the graphics, which are not only in high definition but also feature a certain artistic talent. The chosen style is an interesting cross between photo-realism and comic and has a certain charm. Especially the character close-ups are really great. There are a couple of experiments with other art styles and at the very end you can take the game to a fantastically surreal, maybe even avant-garde, twist. Anyways: There is a lot of variety. The same can be said for the music, which at times is nicely melancholic, sometimes very relaxed, sometimes cheerfully retro but always knows how to emphasise the mood.

And speaking of the overused 'retro' label: Not wholly unironically there seems to be a bit of influence from the game's 'parents' shining through too, sometimes more, sometimes less. It is not just the gameplay, the graphics or the sounds, but rather subtle details too. E.g. Paradigm’s overall mood and setting might strongly remind you of the Space Quest series, which also loved to spoof all those Dys-/Utopias. However the quirky characters (and especially their portraits) could be taken right out of games like Day of the Tentacle or Loom.

Luckily the game does not blindly rely on copying or imitating, like so many other children born out of nostalgia do. No, there is lots of new stuff and more than enough unique ideas which will please all those people who have little use for pure quote mongering. Or to put it shortly: Paradigm is a child that learned much from its parents but also has learned to stand on its own feet. Which proves that the adventure genre still has some life in it, which is not just restricted to an endless circle of rehashes. Keeping this in mind it is quite exciting to wait and see if Jacob Janerka can build on this success.