Rise of the Triad: Dark War
for PC (DOS) 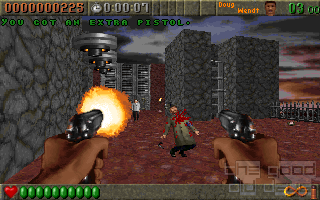 Rise of the Triad: Dark War is a 1995 first-person shooter for MS-DOS developed and published by Apogee. Built on a revamped Wolfenstein 3D engine, the game allows players to choose between five characters that are part of a team of elite soldiers called HUNT. Their mission is to infiltrate an island which is the base of operations for a dangerous cult led by an evil monk known as “El Oscuro”.

This game was released when the FPS genre was blooming after the huge success of DOOM a year earlier. Although it did not become legendary like its predecessors (or successors like Half-Life and Quake), it is quite polished when compared to other DOOM clones of the time and can be a very fun and over the top experience due to the new game mechanics it brings to the table.

First of all, the choice between 5 different playable characters is welcome, although the differences between them are subtle. Many power-ups and weapons can be picked up, ranging from the usual pistols, machine guns and rocket launchers to crazy double pistols, magic spells, glowing baseball bats (?) or the ability to fly.

Despite having lots of gory kills and violent gunplay, everything in the game is so over the top that it feels more like a parody than anything else, so it's not worth to go in depth regarding the plot. It never attempts to be “serious” or creating tension besides some challenging gameplay in the higher difficulty levels.

The main gameplay is based around the usual mechanics found in other mid-90s FPS games (picking up weapons/powerups, killing enemies and finding the level exit), so in that sense you won't find many differences with its counterparts.

Although the game engine is not as advanced as the one from DOOM, it deals with the lack of verticality that plagued Wolfenstein 3D by allowing the player to jump on special round platforms. This can lead to some crazy gameplay with both player and enemies jumping around and shooting everywhere, as well as accessing areas of the map above ground level. This added verticality makes the levels seem larger and deeper, and along with the ability to aim up and down it enhances combat in a way that was not common at the time.

On the downside, the level design seems quite uninspired beyond the jumping mechanics, perhaps due to the inherent limitations of the engine. The levels are somewhat long, and may become a bit maze-like and confusing, but not to the same extent as on Wolfenstein 3D.

You will find lots of switches, push walls, locked/timed doors and traps, which combined with the jumping plates give the game a more “arcade/platformer” feel than other FPSs. This may annoy some players that are mostly interested in the combat and gunplay aspects.

The enemy variety is also quite poor, mostly composed by soldiers, crazy monks and some robots. Enemy AI is on par with similar games, and the difficulty lies more on tackling multiple groups of enemies at the same time rather than specific strategies for each type of foe. After playing for a while it becomes repetitive seeing the same enemies over and over again.

Bosses are only available in the registered version of the game: the first couple of them are mostly larger enemies which do high damage and feel like bullet sponges. However, the last few of them can be trickier to defeat, but I don't want to spoil the later boss encounters.

Graphics are not bad for the time, in particular the enemies which look more realistic than the cartoony soldiers from Wolfenstein. The animations are good but not more impressive than what DOOM did a year earlier.

As far as environments are concerned, unfortunately the textures are not very eye catching, mostly relying on brownish walls or generic castle bricks. There are few truly unique locations, and this can lead the player to get a bit lost in certain levels.

The brightest point of the game has to be its amazing soundtrack by Lee Jackson, which is on par with other classics of the genre. You get fist-pumping catchy tracks like “Goin' Down the Fast Way” or “Suck This” that are very appropriate for the non stop action, but there's a lot of variety here, with some pieces featuring a more jazzy mood and others that are organ-based and fit the whole “evil cult” theme really well.

The music really shines when playing it on a General MIDI device such as the Roland SC-55, as it makes very good use of the different instruments available. The FM version of the soundtrack is also very good but obviously more limited than GM in terms of instrumentation.

All in all, although not on par with DOOM or Half-Life, Rise of the Triad: Dark War is worth playing at least once for fans of the genre. It's quite addictive and some additional replayability can be achieved via the multiplayer mode, where it can lead to crazy and hilarious situations with players jumping around everywhere.

dosgameruy:
Feel free to share anything about Rise of the Triad: Dark War (1995) here!
[Reply] 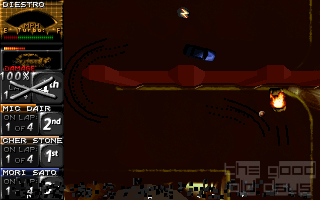