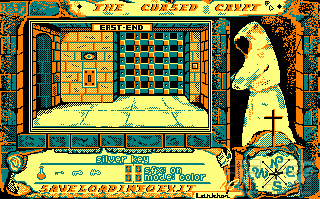 "Parlez-vous français?" At the time of the publication of the original I was already struggling with learning English at school, but fortunately the basic French course was still far away from me and could have stayed there for all I cared. No wonder I never heard of this exclusively French game before.

La Crypte Des Maudits is the successor of La Secte Noire, which was released one year earlier, so this is already the second part on the same topic: The common people are terrorized by the machinations of a brotherhood of dark monks, who practice their black magic in the secret vaults of remote castles. Of course, the player's task is to stop it and eliminate or at least undermine the black sect. A pleasant shiver is apparently provided in this dark, lightning-flooded environment and therefore I am glad to be able to play the game without any knowledge of French.

The indie game developer Brocanty Games has added a lot to the game called Black Sect 2: The Cursed Crypt by making marginal corrections to the gameplay, so that this remake is really fun: You can neither die nor reach dead ends and the game is completely point 'n click controlled, including inventory and save function. Only with the musical background has been exactly retained from the original and they took over the title music including the sound effects one-to-one, so that the creepy atmosphere during the game is almost exclusively created by the graphic representation. Here, there would have been still some room for additional sound effects in the individual game scenes.

The action takes place within the walls of the castle of Golin the Gnome and the rooms found therein are mostly stereotypical: an armoury, a dungeon, a library, a laboratory, a living room with fireplace, large wooden doors and portcullis as well as the obligatory knight's armour, which is draped representatively in small wall niches.

The connoisseur of old knight's castles feels in good hands here and the solution of the puzzles takes a pleasantly quick course thanks to the point 'n click – aka trial 'n error – controls. The aim of various searches is to find the coveted keys to gain access to other ominous chambers. The search also involves finding clues in old parchments and items transformed by alchemy in magical places.

Things turn a bit unfair with the few pixel-sized elements that have to be found in some places. On the other hand, to my great satisfaction they did without the obligatory maze, which so often artificially extended the playing time in the adventure games of this and later dates. Also I was positively surprised by the quality of the puzzles altogether. Because this allegedly completely obscure game surprisingly contains creative and fair puzzles throughout. I was not bored any second and this small retro piece of jewellery is a successful appetizer for more polished and so far unknown pearls of game history.