Leisure Suit Larry in Love for Sail!
for PC 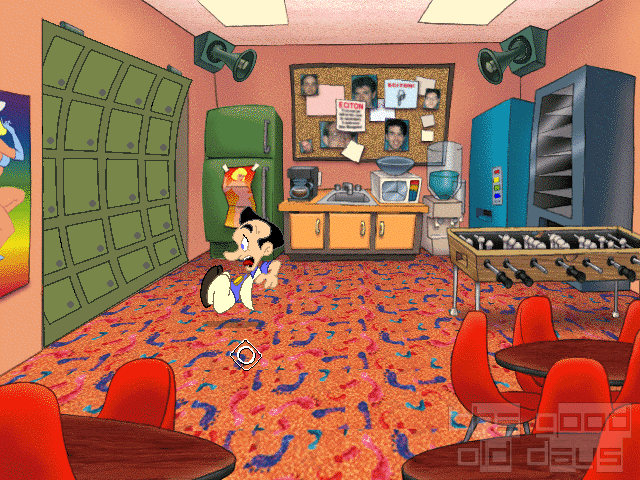 Somehow everyone – who is honest – has been waiting for it or at least has firmly planned a fictitious lottery win in this way: a whole ocean liner full of beautiful women who are all waiting for an amorous adventure with their own personal cock of the walk. The journey promises light-heartedness and luxury and not least the view into some black abyss behind the tanned facade oiled with experienced hands.

Not an grumpy shellback with a white beard and wind tanned skin is the captain of the ship, but a first class blonde. The dream of every man at top of the dream ship knows about her own charms. Therefore, only a very special and extraordinarily successful male hero may be her companion for the week. The prerequisite is the completion of a series of competitions which are held on the ship during the journey. Only real men can pass and the player has the thankless task to lead our sad imitation of a man to the top of the masculine virtues.

Larry Laffer gets my fullest sympathy right at the beginning of the journey. At the beginning, I too feel overwhelmed by the variety of locations and possibilities that are presented on board the gigantic ship right away and that seems to have originated from only one particular branch of the imagination. Quite naively, I set out in search of my cabin and look for the elevator that will take me down from the reception lounge. But even with this simple task I had to give up. For the most part, the individual areas are not connected by doors or elevators, but are only accessible by clicking directly on an overview map. One does not find the respective menu entry until a click with the right mouse button. Maybe a small detail, but one should be able to get along with such obvious things without studying the user manual – in my opinion.

With the puzzles, I had my difficulties, too, because no recognizable flow of action can be discerned in this oversized chaotic landscape of strange encounters. Without instructions, the game is as frustrating as an iceberg in the North Atlantic ocean. In the opening scene, this criticism was obviously taken to heart. Because the fire brigade posted in front of the house calls Larry tips from below when he was tied to a burning bed in the opening scene. But as soon as the liberated Larry sets off on his cruise, this kind of support ebbs away. Rather, the player is later increasingly distracted by many details of his surroundings, which always reveal an offensive gag or at least a raunchy remark on closer inspection. Probably also due to my previous experiences with other parts of the series, but despite these increasing adversities I didn't give up so quickly. Because already the predecessors shone with somewhat pointless but not conceptless – since the actual goal is always in mind – dialogues and sent the exceptionally charming anti-hero from climax to climax.

The actual target audience are probably pubescent boys who think they already know the opposite sex well. But the English voice acting without subtitles scared me off too much at that time. Even now, a non-native speaker surely has a hard time with the non-subtitled, partly breathed or moaned words, which partly overlap with other background noises. The voice output is really well done from an acting point of view. This is probably also a crucial point for the success of such an adventure game. Because similar to cartoons the human voice is a sensitive reference point to the drawn character. The voice of Larry is absolutely spot on for my taste. The voice tries to adapt to the cartoon style and sounds really funny. Peggy – the ship girl for everything who exhibits a very foul articulation – is especially noteworthy. Almost every second word is therefore *beeped*, so that the youth don't take any harm from the inappropriate language. The background music also splashes pleasantly and adapted to the respective scene through the generally relaxed atmosphere on board of the cruise ship.

Most of the characters appear in a full-screen close-up with animated gestures and liven the scene up with their curious looks and behavior. Of course, especially the pretty blondes and also the brunettes and not to forget the black-haired ones are the eye-catcher of every Larry player. The graphics also of these beauties are rather cartoonishly drawn and less realistic than it was still attempted in some of the predecessor titles. This underlines the humorous approach of this title. The advantage of this kind of graphics is, in any case, that the morale brigade is not as easily triggered. And of course, Al Lowe – the inventor and creative director of the popular protagonist – didn't miss to hand out some easter eggs and the diligent seeker gets to see some bouncing balls after a long search.

Now, any young man who is actually pubescent will of course argue that he can see bouncing balls on any relevant “football” website, and what's more in super high resolution HD graphics rather than in a small pixelated DOSbox window. The longtime connoisseur has to counter that Larry simply had his appearance much earlier than any dingy little internet movie. The first part was released in 1987 – still in the pixelated EGA block graphics guise – and was obviously so successful that the series was continued into 2018. Maybe there will be more successors on the market. Nobody parodies the experiences of an adolescent in the guise of an old wannabe-macho as wonderfully as good old Larry Laffer.

The controls happen on the most primitive, almost animalistic level: the mouse pointer in the form of a rubber changes into an erect form in front of clickable objects and with a right click you have access to predefined terms. The option “other”, however, allows the imagination to run wild at any time, even with traditional keyboard input. The parser in the seventh part is already sophisticated enough to offer slippery humor at any time.

In addition, one can also open a menu in the upper left corner, through which the game state can be saved at any time and game options can be changed. The control of the Larry character is done conventionally by mouse-click and one can accelerate its running speed also if necessary. The inventory is accessible via a right click. The controls are functional. But I would have to lie if I described them as intuitive.

Quite Sierra-typical would be an obligatory labyrinth, of course. But that obviously doesn't fit the concept of the Leisure Suit Larry series, although he spends his whole life in delusions and confusions. Instead, the element of gambling comes into play, just like in the previous games. This time we are challenged by a mysterious lady to a dice game for money and clothes. The game is a mixture of Poker and Yahtzee and was unknown to me personally until now. Therefore I had to learn the rules of the game by reading several (!) small printed pages. Wouldn't a one-armed bandit have been enough? No, Al Lowe would say, because – once you get the picture – this Poker variant is at least as entertaining as the real Strip Poker. And he is also right: I feel – spurred on by the unfolding woman – much better entertained than in a stupid maze.

Maybe there is an additional goodie worth mentioning that Larry gets after living through each (sheets) adventure: a pin-up wallpaper with an autograph of the respective ex-girlfriend, as a trophy for bad times so to say. One should note that these pictures are very small nowadays. Since neither resolution nor size should knock anyone off their feet.

The score display is also entertaining and even useful. The player gets an incentive to explore every detail in the whole game which actually runs strictly linearly. The score rewards this achievement and creates a feeling of success throughout the game. In the end I just missed the 1000 points despite the walkthrough. But I wouldn't dream of voluntarily putting myself through this whole mess of abstruseness and obscenity a second time. In this sense, Larry's seventh adventure is more like a one-night stand. But should I want to dive into the depths of frivolous humor again: surely at least one of the meanwhile 13 other adventures – released in the form of remakes and sequels – is worth another jump into the refreshingly cool water. 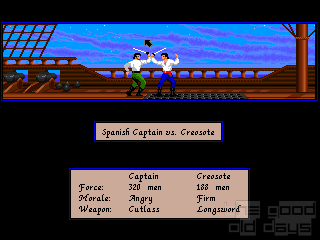