Crash 'n Burn
for 3DO 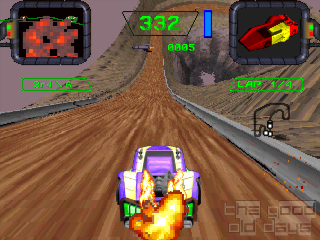 As is common knowledge, after the earth will turn into a big desert (whether through a war, by global warming or whatever other event), the last humans will have nothing better to do than to race highly powered and heavily armoured cars. Armour being necessary, as crashes – even intentional ones – are frequent and use of weapons is absolutely officially sanctioned. Consequently, the drivers all belonging to the typical cliché groups, somewhere between cyberpunk and S&M. This being a “multimedia” production, their digitized faces appear before the races in short video clips expulsing the usual motivational banter, taunts and threats. 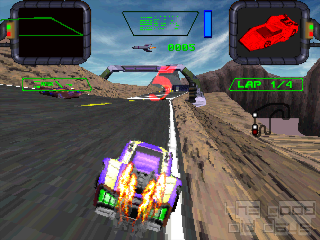 All this fluff has few practical implications on the real road, obviously. Velocity and a quick trigger finger are the real factors for success. Courses wind left, right, up and down across different grounds, under clear sky or through tunnels. Graphically, speed is quite good.

Meaning driving feels good, but when the initial sensation is gone, it becomes quite apparent that most of it is rather irrelevant. Sand doesn't significantly influence the handling of the car, though at least it does look good. Water is noticeably slippery, but it looks awful. The car doesn't handle differently even when tilted far sideways. Also, in the same situation, the way the car never really looks like it touches the ground is much more striking. Time to switch to the non-default cockpit view, which is superior in all aspects anyway.

One nice feature and also a visually cool effect is the automatic weapon locking. Those fall into two rough categories, front of back deployed. I.e. projectiles/beams or land mines. Cars take damage per major part, e.g. front, back or sides and damage can be repaired at a time loss through pit stops. When destroyed completely, some bonus prize money (on top of the prize money for placing well) is awarded to the driver who performed the kill. Money which can be spent after the race to upgrade the car with better armour, thrust, weapons etc. 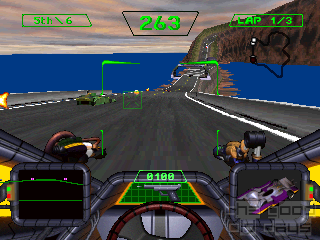 Putting superior graphical quality (for the time) aside, there is no way around admitting, though, that Crash 'n Burn offers nothing above the formula long established by older games. The Ben Hur style fighting aspect is really fairly bland and overall not very useful. Particularly, the other cars and drivers, contrary to expectations based on their initial video appearance, appear and act rather interchangeably during the races. Even less clear, there are also “neutral” cars appearing here and there, which also behave the same way as all others, simply acting as “obstacles” and the reason for their inclusion remains overall unclear.

Make no mistake. This is a serviceable game, offering a reasonable amount of good fun, but it's not a system seller. Most strikingly, it lacks any multiplayer option – on a system which had “multiplayer” prominently in its name. Somewhere half hidden within a mass market of many frequent releases, it probably wouldn't have done too badly, but as a de facto launch title of a new console (whether intended as such or not), it is frankly just not suitable. 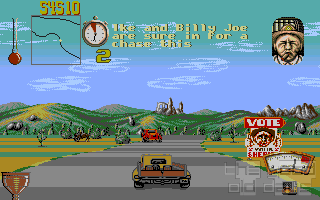