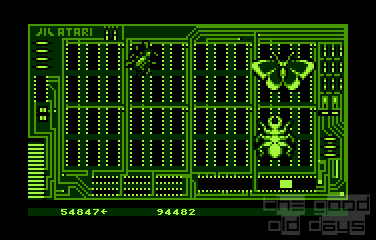 If you look over the shoulder of a core or hobby gamer today, you will surely find a gamepad in their hands. Such a controller is a must-have equipment and even the showpiece of every console. Further bundled with a sensational game title, the console appears as an irresistible package in the stores. But in the 80s, strange flowers sprouted here and there. At that time the joystick was still very popular and the home computer sector could not be imagined without it. Such a joystick was then also included with the Atari XE console. But for the overall package, Atari even included a keyboard for "advanced games" and – to get to the point – a lightgun. The toy in futuristic design was the means of virtual pest control in the included game Bug Hunt. The novel firearm, together with the launch title Bug Hunt, was the driving force behind Atari's first computer-derived console release. This seems very daring nowadays, since the control via controller is so natural. But in its time, the Atari marketing department apparently saw an advantage in the versatile usability of its console. The XE Game System was supposed to offer real arcade feeling with the help of this lightgun, which you could otherwise only get for many coins at the slot machines. Later, Nintendo also produced a lightgun called Zapper for the competing NES and marketed it together with the game Duck Hunt. In the end, it was clearly the NES that won the race for market share and the lightgun has largely disappeared, not least because of the lack of cathode ray tube monitors. So, did Atari bet on the wrong horse on the usability side, or was perhaps even the game offered in the overall package the drawback? An answer is purely speculative of course, but I mounted the horse, put on the cowboy boots and strapped on the shooting iron.

Not often you have the opportunity to experience the game system not only as an emulation. The weapon is quite big, so even adult hands can handle it. The accuracy is quite astonishing. Actually, you naively expect to point a kind of laser beam at the monitor and pull the trigger. Instead, aiming is actually only possible manually by estimating the direction. With a little bit of feeling, it is relatively easy to hit where you think you have aimed. But I didn't even try to aim at the target with the notch and bead sights, but shot directly from the hip like an expert. After a few attempts I found the ultimate cheat mode: just place the gun just in front of the screen and pull the trigger: a hit is guaranteed!

The initial enthusiasm about the new shooting iron does not really vanish that quickly. History teaches us that this console was a total failure. But I'm still very enthusiastic and keep on shooting. It's a kind of magic to shoot at the TV with a pistol and seeing and hearing the digital bullet holes. And in addition, I enjoy hunting vermin by nature. Because even in real life, I hate nothing more than the annoying buzzing of a sleep-robbing and blood-sucking mosquito while falling asleep or the buzzing of an annoying blowfly while working concentrated. Fortunately, the player is spared such noises. The sound landscape is actually very sparse, as there is also no background music. So, all that remains are the monotonous sound effects during shooting and a strange chirping of the omnipresent vermin.

This is obviously the basic tenor of this game: No luxury, just basic structures necessary for the actual game. One can only speculate here whether this also applies to the monochrome representation. Or whether a metaphor should be carefully created here for the even older home computer devices that had no colour mode. I even bet on the latter, because the playing field with its grid-like circuit board design is predestined for a technical-abstract colour scheme. The insects also appear in green-black, but due to their movement they stand out clearly and recognizably from the background.

The actual game action takes place on the individual eight square areas into which the screen is divided. In each of the areas, the target objects appear randomly and then move within this cell until they either disappear on their own or are eliminated by the player with the lightgun. The goal is to achieve a particularly high score.

A certain degree of strategy also plays a role. This is because the small, fast-moving objects generate more points, but are harder to hit. In order to reach the next level – here called wave – after the given amount of time, a constantly increasing rate of accuracy is assumed. The shrewd player waits for the big targets that are easy to hit and can deliver 100% accuracy with just one hit to continue playing in the next wave. But for this one shot, he gets only relatively few points, so he would have to play a lot of waves. With the opposite strategy you try to generate as many points as possible in one wave before you are not allowed to game on due to failing the required accuracy. In spite of occasionally missing a target, you can keep the error rate low because of the increased number of shots compared to the first strategy. After all, with 9 hits, one miss is still a 90 percent hit rate. To make both strategies playable, there is a certain amount of big non-moving targets in each wave. In the end, however, either way, accuracy is the decisive success factor.

Bug Hunt unfortunately does not offer a highscore table, but only a scorecard after each game. To provide the player a roughly valuation of his success after an accomplished hunt, he gets classified, just like on the funfair at the well-known high-striker: from beanpole to Superman. In order to fit into the IT context, in the lower area yet without any IT reference you can be called a manager or a director but in the upper area the player is already a real engineer or even a hacker.

In the 2-player mode the exact evaluation of the score makes sense. The opponents compete one after the other and see their score at the end. It is up to the players themselves to determine the winner of the duel as it is not displayed by the program. In this point the features are also very limited.

The game concept of debugging with a pistol like a real programmer is a truly brilliant idea and has been technically implemented in a perfect-playable way. As a single hunter, shooting with a pistol on the TV and also with the mouse in the emulator is amusing and a lot of fun, but after a while you miss the variety particularly as meanwhile Moorhuhn shooting is “retro” as well. The casual shooter gets highly entertained, but I couldn't discover a long-term motivation within the mainly repetitive gameplay. The 2-player mode isn’t really innovative, because there is no new idea at all. In this respect there would have been potential for more than just a party gag. But the lightgun of the XE Game System is supported by 6 more game titles and could be still useful. Until then, I ride full of hope towards the horizon and the setting sun.