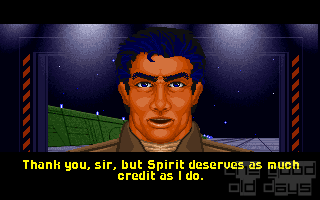 Boom! There goes another Kilrathi. Just that one who has been hot on my tail left. I'll get him soon enough. Some missiles should do the trick. But… what's that? Why is that civilian transport all unguarded? Didn't I give that idiot Maniac explicit orders to keep close watch over it? That hothead wouldn't let himself be lured away, would he? Of course, there he is again chasing cat's tail. And there are the inevitable sneaky bastards who just waited for such an opportunity. Hope I won't be too late rushing back…

Playing Wing Commander in 1990 was like nothing ever encountered before. The intensity of action was only intensified by all the human drama it was embedded in. The scale of the space opera telling the tale of a war to end all wars, the final confrontation which could mean the end for all mankind. And then, there were this amazing audiovisual presentation, the lightning-fast, detailed and colourful graphics, the booming explosions and the grandiose music turning all the more intense the tighter the situation got. 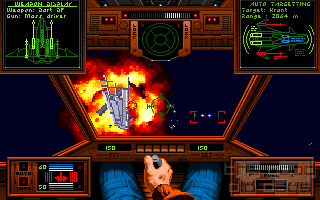 Everybody who saw it just had to be amazed, mouth left hanging open. Out of the blue, one game turns the world of computer gaming upside down? Even more so, as it was released on the IBM PC. Wait a minute, this office typewriter? How did this happen?

Whereas the up to this point much more snazzy home computers still had all their custom chips enabling hardware sprites, smooth scrolling etc., the PC had overtaken everyone else in terms of raw general purpose computing power. Wing Commander employed a trick to utilize this advantage to the fullest extent insofar that it went (back) to a technique which had been present only some low-tech genre entries.

Instead of actually modelling three-dimensional ships using the basic methods of geometry, all ships of this game are just pixelled by hand. The vector technique had its advantages insofar that models could be freely rotated and zoomed, but on the hardware of the time, they always looked quite plain. So sprites again, but without hardware support. Made possible by powerful general purpose CPUs which could quickly, when needed, simply swap one sprite for another version of it to simulate increasing or decreasing distance, turning or damage taken. Technology had taken a leap forward which enabled an illusion sufficient for major suspension of disbelief. Made possible by the 80386 processor, the VGA standard and – on the music and effects side – dedicated sound cards.

Thinking back, we nevertheless have to remind ourselves of one thing. While all those technologies were available on the market, their penetration into people's home was in fact not so great yet. How about all those who were still with ATs, CGA or EGA boards and the blips and blops of the internal PC speaker? 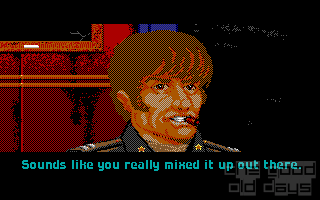 Of course, Wing Commander didn't leave them behind. It would have been commercial suicide. After admiring those cool photos printed in the gaming magazines or on the back of the box, many players, after taking the game home, instead found themselves in front of the now forgotten EGA mode and with the PC speaker. Using which in fact make the same game look and sound awful. Though many people played it like this nevertheless. Just to be part of this new age.

On recent re-play, I'm happy to report that it doesn't hold up too badly still, at least when played in “optimal” conditions. The pixelized space ship sprites exist in sufficient zoom and heading variants to provide a somewhat smooth look. When they inevitably turn into a mess of too large pixels on getting too close, the action is usually hot enough for this not to become a large laughing matter. The adaptive music, switching to heat mode just in the right moments, may deserve some credit there.

All flyable ships generally belong to the fighter category, some leaning more towards heavy than others. The usual trade-off between maneuverability and armour/weapons applies, though the excellent manual, written in format of an in-world magazine may deserve some of the credit making those differences at least much more noticeable.

The missions nevertheless offers some variety. Even very experienced players who have no issues shooting down waves of enemy ships still have some challenge when they have to protect a slow freighter, for example. Those being pretty much defenseless, the enemy fighters attempt typical diversion tactics, i.e. engaging the player (and his wingman) in dogfights, luring them away, while their allies pick apart the easy prey. 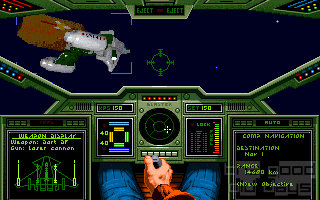 Ready for the escort

Meteors and mine fields occupying some navigation points spice things up a little here and there. Finally, attacking major cruisers feels different from going head-to-head with fast fighters. Those being easy to hit simply due to their size, but a frontal attack or even just staying close is definitely not advisable due to their superior firepower. Hit and run tactics therefore apply.

Keeping a cool head is therefore definitely needed even in the heat of the action. The general strategy, including detailed route planning through nav points, is always given, on the other hand. Just like the choice of ship and wingman.

Leading to the soap opera aspects taking place on the carrier ship. Legend tells of leisure scenes from the carrier ship, with mission briefings, debriefings and plenty of pilot banter. Though sorry to say, it's much more limited than you may think (unless you've recently re-played the game).

Really, what happens in the bar between missions is having three short conversations which focus solely on the military operations. Pilots share their flying tactics, their observations about enemy behaviour etc., which is quite useful, but says little about people relationship. Wingmen behave slightly differently during missions, though if you don't like the unreliable Maniac, for example, and you'd prefer a more dependable sidekick, the only way to get rid of him is getting him killed during a mission. This aspect, often cited when talking about the game, only really took off in the sequels. Even the earlier Wings, which undoubtedly was played in Origin offices when finishing their game, went much further in this respect. 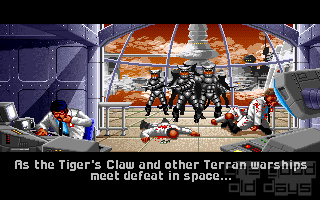 The tides of war are turning against us

Though talking about getting major characters killed, this is indeed still a possibility in Wing Commander. Indeed where the game shines to this day is that – different from Wings – player success is absolutely critical to the overall arc of the simulated war. The player dies, the game is over. The player wins repeatedly, the war is won. The player loses, but survives, the war goes on, but actually in different missions, turning more and more defensive until finally, the complete human fleet has to pull out and cut their losses.

I would encourage players to try those latter, unfortunately seldomly played missions, as this is really a specific of this particular game; Origin never made this effort again. Why didn't they? Unsurprisingly, players hate losing. An unsuccessful mission usually simply was answered by restoring a save game and trying again. This attempt to let players experience “their own” story (within limits) fell on deaf ears.

Now, what's the incentive to play it again apart from this detail? Honestly, if you decide to give it another go, be aware that you're running a risk. The risk of having your rose-tinted memories spoiled. Speaking for myself, I still felt well entertained overall. The core mechanic has stood the test of time and remains very playable. What the game does, it does well.

The thing is, though, that what the game does feels a little limited from today's point of view. It's no surprise that the technical sensation has faded, but even on gameplay side, you may be hard pressed to identify something which hasn't been picked up and improved significantly by later genre entries. Which on the one hand speaks volumes about the huge influence this game had on the genre, but on the other hand detracts from the raw enjoyment.

So it really comes down to why you would want to play it. If you want to see how the modern-day action-packed space shooter really took off, go for it! There can be no doubt the game deserves its prominent place in the history books. Though if what you're actually looking for is an amazing space shooter, think twice. Wing Commander will not bore you, but you may find yourself shooting the younger, fresher generation some side glances. 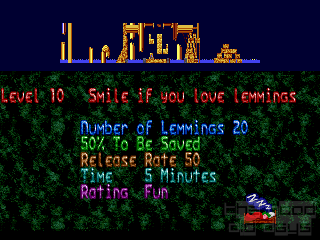