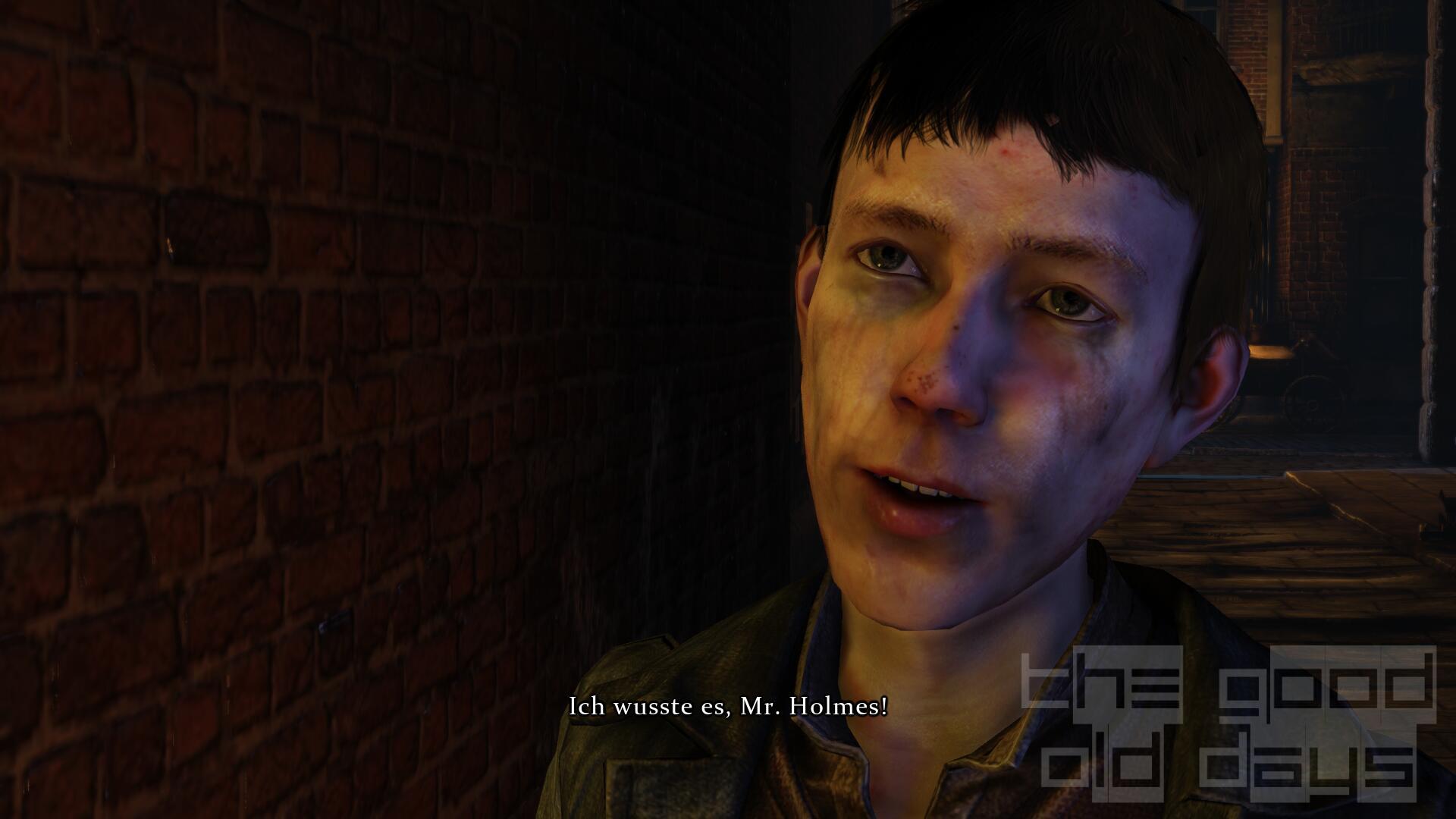 Admittedly, the master detective has always been a great attraction to me and the reviews of this game have sounded extremely positive throughout. The previous part was quite recommendable and I already reviewed it. In the end, curiosity triumphed over my commitments and I spent the good 10 hours of playing time in order not to miss the latest developments in crime fighting of the master detective. For connoisseurs of the series, it should be mentioned that even more recent developments have already been realized in a successor to this 6-year-old title. My judgement will not be objective, like someone who didn't grow up with the books of Arthur Canon Doyle, and perhaps thinks more of Pikachu in terms of a Master Detective.

You step into the role of Sherlock Holmes and move freely in a 3D environment which is displayed with the Unreal Engine. During the dialogues the heads of the characters are shown very large and true-to-life. Sometimes they are so close that wrinkles, impurities of the skin and enlarged pores of the alcoholic can be clearly seen. In dialogue mode, a camera movement also allows you to see the rest of the person's body, so that details like dirt on the collar, a missing wedding ring, a letter in the pocket or a torn off button become apparent. Apart from that, the dialogues are limited to clicking on a certain topic and are therefore not very interactive.

The 6 cases in total will be processed strictly chronologically or rather successively and are connected by small sequences. Mostly the inspector Lestrade of Scotland Yard calls Mr. Holmes for help in delicate matters. After a short carriage ride to the scene of the crime, it is carefully examined for any abnormalities and clues. The interactive points of the scene are visually highlighted, so that one does not run the risk of overlooking anything. In an automatically kept journal special entries appear as progress is made. They are referring to the concluded conversations, the upcoming tasks, the taken objects and the unlocked scenes. Everything is based around the apartment in Baker Street, which is still known from the previous title and unchanged in terms of the furnishing. Here, Holmes conducts small experiments and analyses the evidence he procures, gets his sniffer dog Toby to explore a scent trail, disguises himself with his various suits, beards and caps or simply looks up something in his library of letters, newspaper clippings and encyclopaedias. The traces and clues found are finally condensed into concrete statements.

These are then arranged in form of synapses in a schematic recreating the brain. If further synapses – i.e. proven facts – are added, larger nodes arise of them. These represent assumptions for certain constellations of the reconstructed course of events. In other words: the perpetrator is arrested via a chain of evidence. The special feature of this scheme is that a perpetrator could be convicted with just a few synapses. An ironic side blow to the way the police work. However, this verdict can also prove to be wrong. Only deeper investigation into the subject by the master detective, makes tiny but crucial details become apparent. This is the genius spirit that Mr. Holmes has ahead of the common police work.

And this is also the attraction of the game. Because the cases sometimes have more than 5 different possible solutions. But only one of them is actually correct. In addition, the player can determine how the convicted perpetrator is dealt with. So he can tend to show mercy, or he can act with full harshness of the law. At the end of the game, the solution and the moral decision result in a character description of Sherlock Holmes, as the player has profiled him through his decisions. The true connoisseur, however, wants to get as close as possible to the unattainable idol, and follows every possible lead, no matter how absurd. The insights gained in the process alone are motivation enough to not just scratch the surface.

As in the previous part, small mini-games and action sequences are built in at various points in the game. Sometimes the mouse must be clicked hectically or a certain timing must be kept. When opening locks, the player may proceed according to an unchanged principle: Cylinders inserted into each other must be moved into the correct position by turning them. Naturally, you will encounter this mini-game more often and the complexity of the small puzzle will gradually increase as the game progresses. Sometimes also reaction speed or shooting accuracy is required. You can skip any of these games, so that the adventure game doesn't become an action adventure. However, you will be awarded trophies for solving a certain number of games. The mini games were for my taste very balanced and not as annoying as in the previous part. Only one of them I could not complete, because a certain procedure regularly caused a complete crash of the software. A bug which will hopefully be fixed soon. As well as an older bug that affected the auto-save function in the third case.

The settings and scenes come very close to the Victorian zeitgeist without them seeming kitschy. The various details show the wealth of knowledge and exact research of this epoch by the developers. The atmosphere of the late 19th century is tastefully captured and prepared for the Sherlock Holmes spirit. The acting figures are credibly and graphically realistically staged. The voice output is completely in English, with optional subtitles in other languages being available. The voice dubbing actors are a big plus. Each figure is characterized by its pronunciation and its linguistic level, which is almost pedantic and archetypically pointed. The use of paid professional actors is obvious. The faces, apparently animated by motion capture, are also extremely expressive. Together with a discreet background music and the refreshing camera work in the small cutscenes, the player is transported into his own personal interactive Sherlock-Holmes-movie-world.

Since even an interested viewer does not watch every film at random, the choice of cases and their ludic abundance is of course crucial. Therefore a short commentary on each case:

The Fate of Black Peter: I happened to know the literary source and the case was easily solved. From this perspective, it's the best way to get to know the controls and keyboard layout.

The Riddle on the Rails: Pretty exciting hook at the beginning, but clears up pretty quickly as the case progresses. The further investigations were for my taste rather tiring and insignificant, since a rather untypical power and monetary policy basic topic prevailed.

The Blood Bath: My personal favourite, although this case contains a labyrinth, which is so unloved by me in adventure games. One finds echoes of Roman mythology and insights into archaeology. This is the only case in which you combine items in classic adventure style to preserve the key element and in which you can take over the role of Doctor Watson in parts.

The Abbey Grange Affair: As a story in its own right, it is certainly worth telling and moving, but in terms of playability it is rather light fare. The locations are not very exciting and the puzzles are not very creative. Probably the only case where over 90% of the players came across the same (correct) culprit.

The Kew Gardens Drama: Murder and intrigue are presented in an exciting way at the scene of a seemingly harmless greenhouse. Packed with entertaining details and numerous connections that allow many conclusions and leave the player in the dark for a long time.

A Half Moon Walk: The most difficult case, which demands everything from even the most experienced player. You will be rewarded with an ominous atmosphere at numerous locations. If the solution is correct, a political-philosophical question is posed and the player's answer finally seals the actual attitude of Sherlock Holmes concerning revolutionary thoughts.

The present game was a real treat from my point of view. Newcomers should know that the genre is very special. This is just no pure point-and-click adventure game in the classical sense. Already the 3D view alone is rather untypical. Instead the player is presented a mixture of different gaming branches, whose only purpose is the screen incarnation of a literary character. But I find it all the more astonishing that this old and probably by now old-fashioned character can be combined so well with a whole range of technological inventiveness. The developers go a step further in this respect and see in their work echoes of Fyodor Dostoyevsky's “Crime and Punishment”, from which it is also quoted. For Sherlock Holmes, due to his extraordinary genius and outstanding intellectual capacity, is in such an exposed position for the London underworld that he is allowed to be both prosecutor and judge in each of the 6 cases at the same time. A daring comparison of the Ukrainian development team, which may be seen as an excuse for a missing continuous new story. Because reinventing a Sherlock Holmes story was the strength of the previous title. The successor is more playable and technically mature, but doesn't break new ground in terms of content. Instead, the depth of content – bluntly said – only reaches the level of an over 100-year-old dime novel. 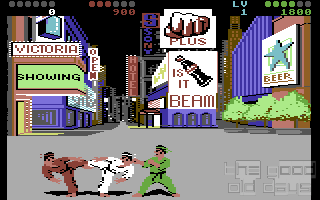