Hibernated 1: This Place is Death
for C64 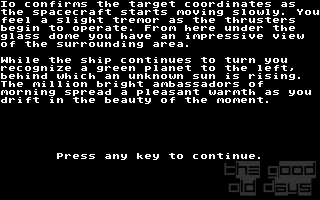 Don't we all yearn for those simpler times which seem to have long disappeared? When adventurous stories kept us up all night and text input parsers understood at most two words at a time? When development of a game wasn't so incredibly daunting yet, but could be undertaken by an individual bedroom coder? Hibernated, having been commercially marketed for some time before at least digital distribution became purely donation based, caters to such nostalgia.

The game concerns the exploration of an alien spacecraft. Apart from some still active robots and security systems, no sign of life. Until the protagonist discovers the dead bodies. What happened here? What was this ship's and crew's mission? For sure, we shouldn't expect Alien or even Prometheus here, but it's classic genre fiction, light on explicit, but providing sufficient atmospheric nuances to keep its player interested.

Keeping things simple in gameplay terms as well, Hibernated has been initially written in a 1980s development system and then ported to yet another one, making it available on pretty much any computer platform of days gone by. The parser understands simple two word commands, nothing more. Catering to today's audience, the USE verb is quite prominent: apply it to an object and what will be done with it will be automatically interpreted by the game. If the author considered this as a solution to something. If not, you will get to read the standard response "This is not an option"

This is because not just the game's underlying technology and its narrative are decidedly old-school, but the design philosophy is also a throwback to the simpler games of the 1980s. Whereas some selected companies even at that time already saw it as their duty to entertain their players when they were not progressing, the vast bulk of games only consisted of a narrowly implemented solution path. As does Hibernated, leading to countless occurences of non-helpful rejections by the parser when experimenting. Reducing the need for such experimentation is the clear separation of textual description (including a clear listing of location exits) and tangeable objects (Scott Adams would be so proud). Not great for immersion into the setting, but immensely practical in terms of enabling progress.

Whether this game is for you really doesn't depend so much on the game, but rather on yourself. Purely personally, genre setting and plot resonated with me. I appreciated the easy progress, the limited map as well as absence of dead ends and deaths. Even if I sometimes almost felt frustrated when puzzles more of less solved themselves when although I had no real idea towards a solution, USE OBJECT made me progress nevertheless. The little touches of adaptive text (such as the ROBBED HIGH PRIESTESS) made me smile in nostalgic bliss. Though I also painfully missed a more fleshed out world to really interact with. Little things to find here and there, making everything more tangeable and helping implicit storytelling.

For sure, especially the last point would have exploded development time exponentially. Though honestly, if you think you can charge for your game, you better be prepared to go this extra mile. The way it is, Hibernated is a little snack, a throwback into the past which incorporates a number of modern-day lessons, but only insofar that it avoids negatives. It doesn't dare touching the major positives.