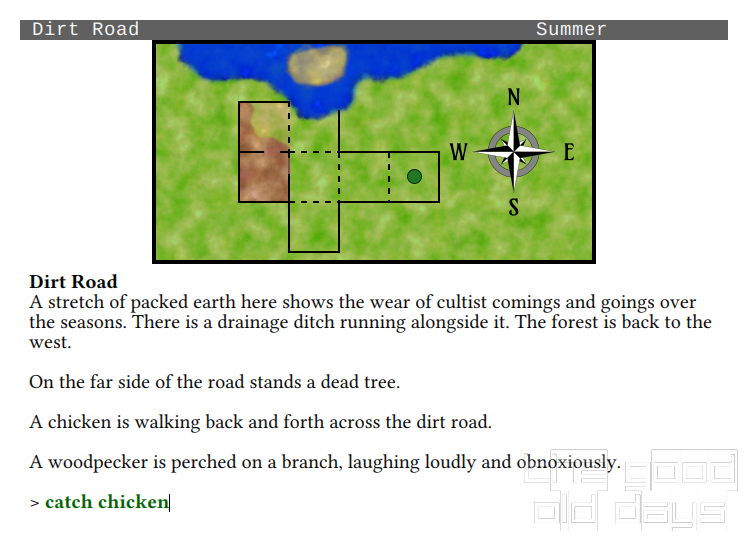 Ah, good old time travel clichés! As soon as the world finally comes crashing down there seems to be only one direction, and that is: Backwards. Just think of all those books, movies and games about world shattering events and the multitude of heroes that get send back to the past to make things right again. And now imagine the following candidate: A member of the Federal Bureau of Druids jumping back in time in order to stop the Order of the Fiery Doom from burning down the whole world. As witnessed in: Seasonal Apocalypse Disorder.

This setup is so archetypical that the game does not even go into much further detail. No, its setting and plot do neither reinvent the wheel nor does it try to improve it. The nameless fantasy world is outlined in a couple of sentences throwing you right into the action. But let us be honest: How much background does it take to get started? I take a straightforward stereotypical scenario over an overly expansive, nonsensical encyclopedia of lore any day. Still, a bit more details might not have hurt after all, because what you gain on immediate momentum you lose on actual player motivation (Why am I doing all of this?).

Fittingly the plot comes packed in a very typical text adventure including some good old exploration and classical item based puzzles. Mostly it plays things straight and save: You move along a compass rose, pick up everything that is not nailed down, meet several colourful characters and break down the one or the other barrier. Nevertheless its main feature is unique enough to make it stand out of the masses to make it worth a playthrough or two.

More precisely the time travelling is used for great effect to offer a functional version of a four dimensional world. At first it appears to be restrictive: You can only move around in a (small) building and its immediate surroundings, no matter to which time you travel, and there are only four points of time (actually the four seasons spanning over a year) you can travel to. And the actual logic behind changes in the time continuum plays out on a very basic level: changes in the past have immediate effects in the future and cancel out all previous outcomes.

But this comes with the big plus of keeping things simple enough to keep track of all the different objects, persons and places you have to deal with. Usually when someone goes overboard with the times, locations and their connections you lose sight of the bigger picture faster than you think and things get overly convoluted or complicated while still tapping into another paradox or breaking the world’s inherent logic.

And speaking of getting the bigger picture and keeping track of cause and effect: One thing that aids your orientation immensely is an automap that does not only manage to show your location but also gives you an impression of which season you are currently in. An extremely helpful feature that makes moving around and finding all the stuff you need a lot more easier than in comparable titles. Plus the game even goes as far as telling you were and when an item or person was last seen if you try to interact with it without it being nearby. A very clever idea that should definitely be used more often!

It is also nice how the game slowly introduces and expands the actual time jumps. You open up one period after another, get to know them one by one. So at first you act mostly in one time frame but after a while you will have to use more lateral thinking, build connections between the different time periods. This is also when you can jump around more easily and in the end you can even take items with you to freely move around through time and space.

Someone put a lot of thought and effort into this design and how to make the time travelling part accessible and it certainly payed off. Overall you get a nice impression of an ever expanding game world that opens up more and more possibilities. It is impressive how this turns from a very linear first half into an immensely open scenario in the latter half which has multiple endings that take vastly different turns.

So far so good, it is just a pity that the rest of the game is somewhat superficial: The writing is rather bland, describing just the bare necessities about you surroundings. As mentioned above most things about the setting remain far too vague, which is not helped by the fact that you cannot talk to anybody, because somehow all of the characters you meet do not speak your language (yet in a strange twist you can still perfectly read their writings).

Also the most crucial point, namely the parser, might work well enough to not make you want to give up immediately, but there is still room for improvement. Sometimes it shows glimmers of brilliance (like making pop corn without typing each and every step) but mostly it does not only fail to acknowledge non essential commands it is also overly picky about solving some of the puzzles.

Said puzzles are a bit of a mixed bag too. A couple of them are brilliant, especially those that rely on actually making use of the time jumping mechanics. Like: How do you unlock a door which lacks a key, but you can get your hands on the key in the past? How can you reach forbidden rooms or remote areas with some four dimensional thinking? How can you survive being burnt alive?

But some of the more tedious (and sadly more prevalent) ones consist of just giving the right item to the right person. Those are extremely frustrating because the game only gives you very subtle clues which ones belongs to whom. Funnily this is were a fault in the parser actually comes in handy: You can just “give all” to the characters and offer them up your whole inventory, letting them pick that one particular item they were looking for, but unable to tell you about, themselves. This makes those fetch quests – thankfully! – almost trivial.

In summary this is a promising game with lots of potential but the overall impression is that it lacks a final polish. If you are into time travelling stories you could definitely do worse because it is far from being a bad game: Its main selling point is done excellently, it is just a shame that the actual “meat” is a bit lightweight. 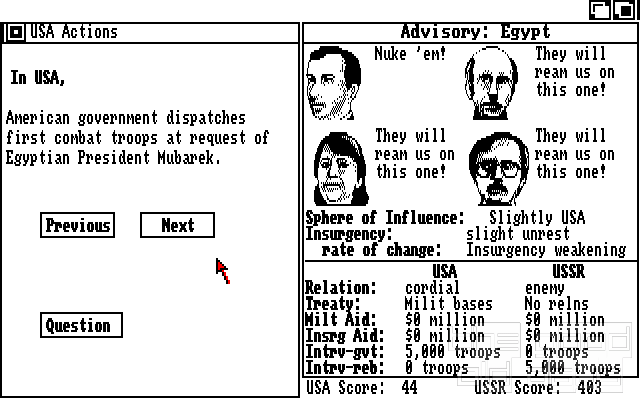