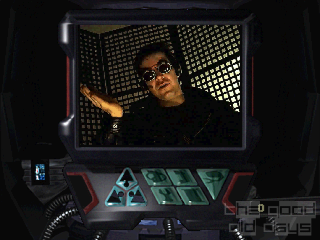 The player, being part of a phreaker-like community, of course knows the perfect way to finance this. Non-secured access points located in a non-descript maze can be drained using a floating probe. Putting a positive spin to it, it could be claimed that this puts Neurodancer in the tradition of Activision's Hacker games which featured something not completely dissimilar as main activity. Though if anyone has an idea why remote controlled robots traversing mazes should be a good representation of "hacking", I would really like to know.

The first challenge in this particular instance of "hacking" is not to be greedy: the longer the probe stays connected, the higher the risk of detection. The second, much bigger challenge being to have the patience to stand the noticeable laggy loading times between taking just one step forward, left or right inside the maze and then watching the crawlingly slow pre-rendered floating animation.

Anyway, having procured some credits, the player can then choose to dial back in to the Neurodancer service and watch one of the girls "dance". Since it's a personal show, it is even possible to point at the article of clothing to take off next (Wow, the interactivity! It's almost like I'm actually there!). Each piece at an additional charge of credits, of course. Until finally/hopefully, all clothes are gone. Well, all that the game allows. 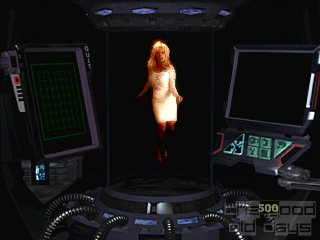 Aaaaand… that's it. The whole game. Let me repeat, just to savour once again: the game is traversing mazes which consist of exactly one wall texture everywhere, clicking a button to "connect" and then quickly "disconnecting" again; then watching three coarsely pixilized, top-heavy women in horrible 1990s costumes "dance" while using a pointer to tell them how to continue stripping.

Around that, the producers have built a bare minimum of excuse contents to make the whole thing appear a little bit more fleshed out. A smoke screen which turns transparent after about 2 minutes. There are some other "channels" to browse on the Neuronet: a strip rock-paper-scissors (actually interactive) and a handful of non-interactive joke videos (e.g. a spoof of a weather forecast).

Adding insult to injury, the game's core mechanic during the stripping doesn't even work right at times. In theory, at any time, it should be possible to tell the girls to continue taking off stuff from "top" or "bottom". Though the producers apparently couldn't be arsed to film all possible combinations of clothed/non-clothed states. So, without indication by the game, there is often no way to actually make a real choice. For the sake of argument, let's assume you really want to see this girl in her skirt and bra, for example. So you click on her blouse. Woosh, another 100 credits gone. For nothing, as this combination just doesn't exist. Clicking on her skirt first would have been a better investment.

Meaning: even assuming a player were to take this paper thin "game" seriously and he would consider the reward for his time investment adequate, he would finally still get to hate Neurodancer, as it doesn't even deliver what it promises. That, starting from a promise which was ludicrous to start with. For those who want to see naked women, there must be better options than this.