Ripley's Believe It or Not! – The Riddle of Master Lu
for PC (DOS) 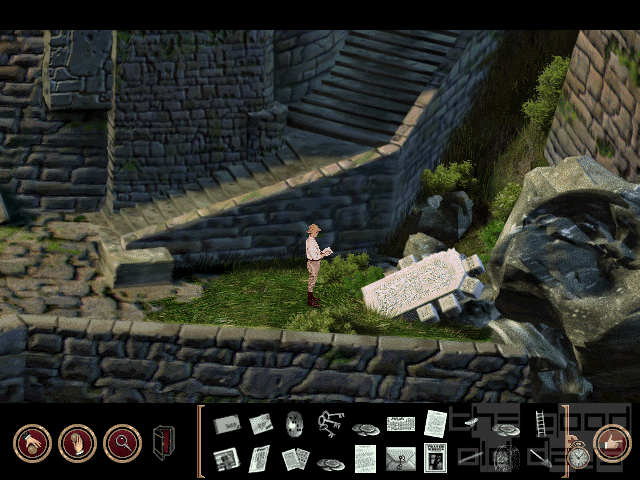 Among the point & click adventure games of the mid-1990s, Master Lu has become one of the most obscure ones. You'll be hard pressed to find records of its existence, let alone more current testimonials of any players from the time of its release or more recent experiences. All that in spite of having scored high marks all across the board when it was new. My personal experience with it wasn't all that far from that. I played it, but never very far. The very few, unspecific recollections I kept were all positive, so it became a bit of a mystery to myself why I never got further than the second major location. Is there anything to this game which makes it universally forgettable? Let's rediscover and test this hypothesis!

Right off the bat, the intro does everything right. Protagonist Ripley, hobby archeologist and adventurer, on the run from armed Egyptian baddies, but saved by a “talking” Sphinx. Or was it just the wind? Then cut to a romantic dinner in New York with Mei Ling, his girlfriend. With Chinese evildoers right in the vicinity, unknown to him. Then cut to the initial interactive scene involving a dangerous cobra. All this sets the scene perfectly: adventure, danger, mystery, love… The fact that graphically, the game uses badly aged rendering backgrounds with slightly grainy, digitized actors pasted in front wouldn't have occurred to me as problematic in the mid-90s at all. And, by the way, it does get better as the game progresses. 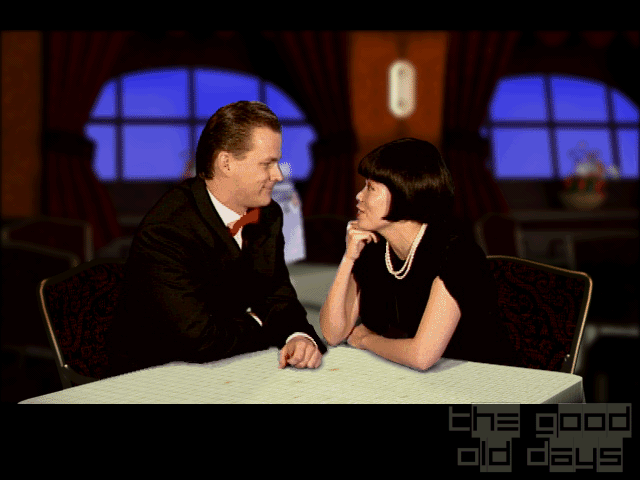 …and that's how I escaped thanks to the Sphinx.

The scenery is rich, both graphically and aurally. Many small details can be seen and examined, even if they serve no immediate gameplay purpose. All serving the implicit characterization of our hero, the owner of the place or this particular part of the world. Even background noise is customized per location.

Plot and characters are equally promising. Paying tribute to the adventure novels of the 1920s and 1930s, the yellow peril theme gets mixed up with the rise of the nazi movement in Germany and the looming threat of worldwide war in a semi-ironic plot played straight to the knowing audience. Within this frame, genre archetypes like the sadist Asian henchman, the highly cultured bad guy and the damsel in distress play their expected parts. It's only Mei Ling who escapes these treasured stereotying to save Ripley's hide time and time again. Imagine Indiana Jones in a Sax Rohmer story and you get the picture. 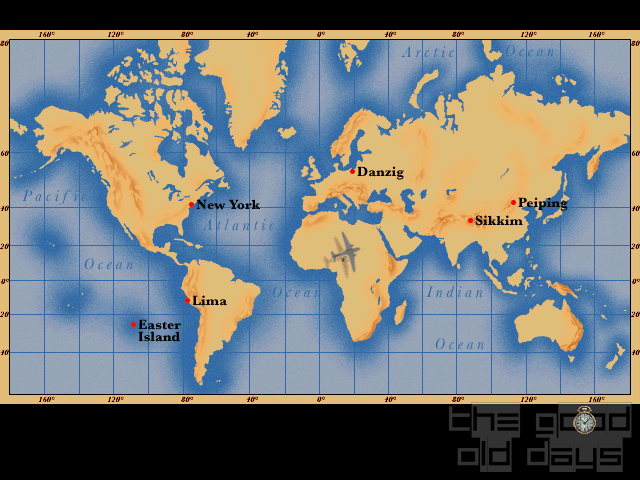 With plot and characters so much on the forefront, Master Lu nevertheless isn't nearly as dialogue heavy as most of its contemporaries. Writing is to the point and what is exchanged is not just well-written, but also almost always relevant. True to the genre, death exists, but it isn't fatal: the player is simply put back into the spot right before the fatal mistake happened. Last, but not least, there is a (mostly) optional mini-game hidden beneath the main plot. At all the stops of the world-hopping adventure, little curiosities, treasures or artifacts can be found which Ripley can send back to improve the exhibition in his home base. Thus earning him the money necessary to finance those travels.

So many words and we're still not a step closer to the mystery of this game's obscurity. Don't despair! Good news: I've found it. Wait, isn't this bad news?

After enjoying the excellent opening scenes in New York and then paying a visit to China, the second destination is Danzig. After having a well-paced conversation with the owner of the Ace of Spades castle, dealing with his grumpy (and greedy) gardener and solving some nice mechanical manipulation puzzles, Ripley finds himself in the late baron's secret laboratory… where apparently, the designers considered it should now be time to increase difficulty “a bit”. 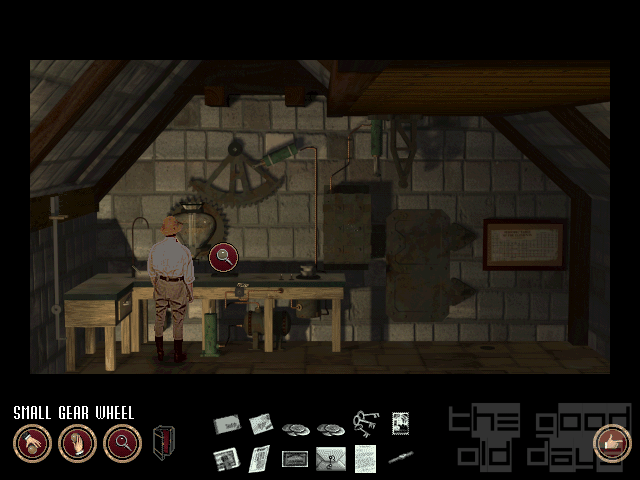 Down there, strange machinery holding a precious jewel needs to be manipulated to free its prize. Still, first impression is quite positive, as this is no out of this world “puzzle box”, as established deeply into the genre two years earlier by Myst. Everything takes place on the main screen with the normal interface, for a purpose organically originating from the plot.

Nevertheless, this section is… how to put it… only suitable for the extremely patient. The screen is chock full of hotspots, some not larger than few pixels and directly bordering on other hotspots or even located on top of other hotspots. More than a dozen new objects spam the player's inventory. The necessary manipulations can be derived through experimentation, but the sheer size of the search space hardly make it attractive. For sure, this was where I gave up all those years ago.

This time, I pushed through and I found myself rewarded by a very good game, for all the reasons explained earlier. Though puzzle design remains an uneven field, ranging from ingeniously good (unravelling the cryptic hints the monks give to find out which of them has been studying for the longest time) to unbelievably and unnecessarily long-winded. As if the lab hadn't been enough, there is also a lengthy maze later on, which serves no purpose apart from chasing away even more players and once again showing how much more efficient movement used to be in the adventure genre when input was still provided by text commands. 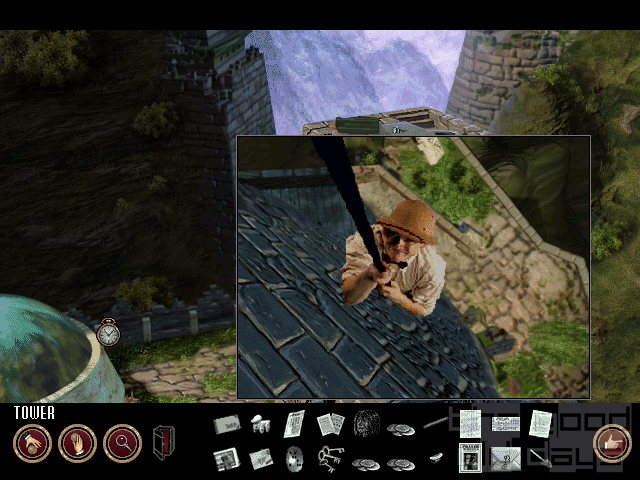 It is strange that the same game provides leads to such major frustration, but also manages some genuinely touching scenes such as the story about the son of one travel agent (and there I was thinking those were all completely interchangeable save for their local accent), which has no relevance for the main plot, but was nevertheless added to great effect. That the same designers considered it necessary to use the oldest hats in the book to increase play time, but also came up with so many colourful, lovingly designed locations.

The memory of those low points may not go away this time. Nevertheless, I'm sure it will fade. What usually remains in retrospect is the recollection of a game's ambition rather than the grinding details of solving it. Ambition plus some of those great moments where Master Lu finds itself up there with the very best of the genre – that is what I'll try to engrave on my mind this time around.

Herr M.:
I distinctly remember this game: It was about the time when I started losing interest in adventure games (especially the more cinematic ones). Saw it in several ads and maybe a solution or two, but never played it myself. In my memory it looked totally different, more like with classic hand-drawn VGA graphics and somehow more puzzle oriented (as in sliding thingies, word play and lever switching). And I always imagined that Master Lu was some kind of merchant with one of those weird Chinese shops in a back alley. Strange to finally see that the game was totally different.
[Reply] 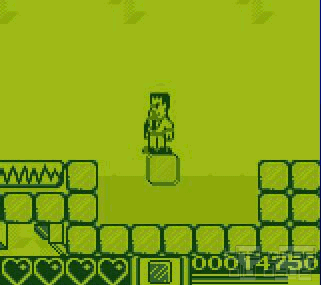