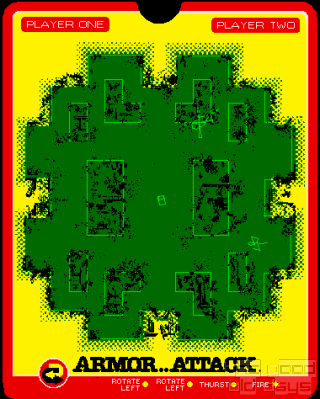 Where DID that enemy tank go? Behind that house? Or next to that ruin? BOOM! Whoah, that was close! It must be able to see us! Let's get outta here! Ahh, now I have you. Just one more shot, and then... trrrrrrrrrrrrrr....... Oh no, not that annoying chopper again! Maybe we can hide here...AAAAH! It has seen us! Race for it! It's released a missile! It's heading this waBOOM! Crap...

Armor attack is definitely my favourite Vectrex game. I have spent hundreds of hours playing it. It has good sound effects (especially the start-up sound), no music, but the enemy tanks/choppers will provide background music of their own) It has a multi-player option so you can play with two jeeps at the same time, not turn-based as was usually the case. The graphics are nice, though nothing special.

You are the commander of a rocket-firing jeep, stationed in an abandoned city. It's your job to shoot all enemy tanks, all the while watching out for choppers coming to get you. You can shoot those as well, but they will get more and more alert every time. Once they have found you, they will circle around you firing rockets. Not good.

You will also find yourself battling more and more tanks as time progresses, and they will get faster and faster. This game can therefore get very difficult.

The game has three modes, the first one being the easiest, the last one not even showing walls.

You get an extra life every time you accumulate 10000 points. You start with five lives. Choppers give you 1000 points, tanks only 200/300, so it might be smart to leave the tanks be and only shoot choppers. They only have to be hit once.

The bad points of the game are the high difficulty and the fact that the tanks shoot at specified times instead of when they have you in their sights.

I REALLY advise you to try this game, it's worth it!

Mr Creosote:
Yet another piece of proof you don't need hundreds of levels to motivate, but just a simple, working idea. Great fun!
Johann67:
Feel free to share anything about Armor Attack (1982) here!
[Reply] 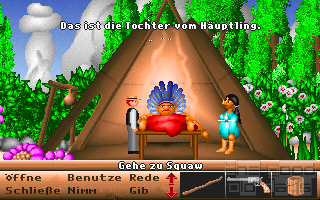