The Curse of Rabenstein
for Amstrad CPC 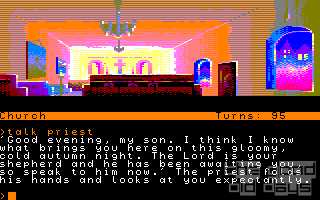 From science fiction to horror – still within dime novel territory. On the journey from one major city to another, your coach gets lost and you find yourself in a remote village in the middle of nowhere – where (to the player at least) it is quite apparent that a vampiric plague is afoot. Can you survive the night and put an end to this curse? For sure. Can this game really live up to its bold claim to carry on the tradition of Level 9, one of the most prolific producers of text adventures in history? Not really, though that would have been asking too much anyway.

Let's not judge the game for being short (1-2 hours playtime), linear and easy (no deaths, no dead ends). All this is simply adapted to today's audiences and one cannot fault the game for it. In fact, some technical limitations of the underlying development system – such as the simplistic two-word parser which even (cardinal sin) pretends to understand commands when it doesn't – aside, The Curse of Rabenstein follows a fairly modern approach in most parts of its game design. 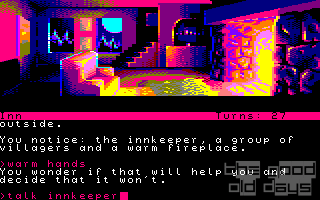 Most importantly, it clearly feels to be narrative driven. Where the author's previous work, Hibernated, still was a bit awkward in its storytelling, using the clumsy way of the plot standing still after the (comparatively) large opening text while the player is given places and objects to tinker with, only to dump further large chunks of expository text at central choke points of the story, Rabenstein manages to keep things moving in a much more coherent and organic way. Smaller bits and pieces of the overall plot appear here and there, coming together as a atmospheric, if schlocky whole.

This also reflects on the tasks the player is given. Instead of artificially including convoluted puzzles for the sake of itself, the challenges at hand clearly arise from each situation. While essentially positive, the flip side of this coin is that the author apparently couldn't think of particularly imaginative ways to act based on the situations he creates. The puzzles are therefore quite obvious, though solutions on the cliché level of Bill Bergson may be considered charming in places after all.

It becomes undeniably less charming when everything the author didn't think of is simply rejected without a good reason. You need water and you find two good containers for it early on. Though only one is accepted to carry said water. You've got a crucifix and you meet a vampire, but you can't show it to him. The carriage driver has disappeared, the protagonist has already seen some walking dead nearby, and there are signs he has been taken against his will, but can the player search or even just call for him? No, the plot as the author had it in mind is that the protagonist first takes his time getting acquainted with the townfolk before returning to the scene of crime to investigate further, so this is how it has to happen. 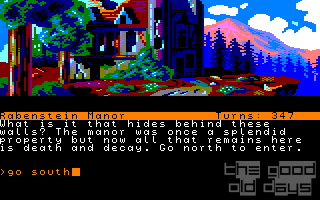 Speaking of townfolk, though, this is where the game shows one of its main strenghts. The strange setting, the weird characters and the pointed writing do communicate implicitly that more may be wrong in this place than just the obvious vampire threat. The game doesn't go as far as a real subtext level, but it does do a good job of alluding to some twist which indeed does arrive before the endgame. Within genre conventions, this twist is pretty good. Totally meaningless and it remains unreflected by both the narration and the protagonist in the end, but it works.

The location illustrations are the second main attraction. Drawn at high quality – certain developers of the 80s and even 90s would have killed to reach this level – there is one unique picture per location, sometimes even in different states. Writing and picture complement each other very well.

Those pictures probably being the source of the claim towards following up on a legacy of companies like Level 9. Though honestly, above the pure screen layout (illustration on top, text on the bottom), there is little which could back up such a bold claim. Even in the early 1980s, Level 9 operated on a much more powerful and flexible parser (and let's not start about complexity and game length again). And what they, as well as their contemporaries of Magnetic Scrolls knew, was that while illustrations do bring additional value to their games, they also take up a lot of screen estate, leading to a lot of text scrolling. Hence their feature to temporarily or permanently switch the illustrations off – something this game does not allow unfortunately.

Nevertheless, with a modern-day audience in mind, The Curse of Rabenstein for sure is a slick production all around. It hasn't been written to challenge, but to give a sense of achievement. It hasn't been written for any philosophical meaning, but as the equivalent of a pulp magazine short story – be entertained while it lasts and forget about it after. Goals achieved admirably!