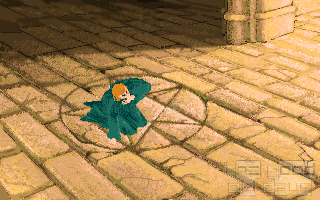 You know, in spite of having produced exclusively less than perfect games, I've always kept a certain fondness, a soft spot fo the clunky Alone in the Dark engine. This combination of often really well painted pixel backgrounds and freely turnable and zoomable figures exhibited quite some charm. So when I (like most players, as it didn't sell at all first time around) got Time Gate as part of a collection, I was actually pleasantly surprised. 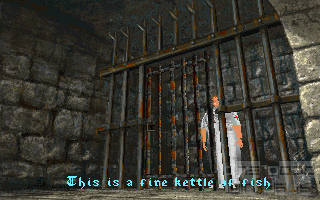 Bad translation is to be expected

The plot circles around law student William. Sitting peacefully in front of his computer in his apartment in Paris (naturally close to the Eiffel tower, he must be stinking rich), he is ambushed by a knight in full armor. Turns out an evil templar who goes by the name of Wolfram has kidnapped William's girlfriend… no, his fiancé. Everything is in order here. Magical lore due to moon phase dictate that only a virgin male can save her. Phew, finally a break for William the Chaste! Whoops, sorry, I made the last thing up.

In all honesty, though, storytelling is not exactly the game's strong suit. Templars, devil-worship, demons, ghouls… Why Wolfram is after this Juliette (or William?) at all, even the way of finally defeating him – it all remains sketchy at best and comes out rather messy. What works, though, is that this “theme” (let's call it that way) makes for nice scenery, particularly as after the prologue in a modern-day museum, William spends the remainder of the game in the 14th century. 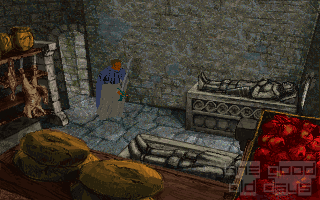 Tombstones inside a storage room?

What is already quite apparent in the opening scene, however, is the designer's honest attempt to spice up the Alone in the Dark formula with some variation in gameplay terms. Instead of just meeting monsters and fighting them, there are other skill tests and small puzzles. Granted, some of them rather clunky again (avoiding movement sensors from crooked camera angles with inexact controls, not a perfect combination), but good will is definitely there.

Puzzles are sometimes rather obscure, but the overall structure of the game helps keeping it acceptable. The player is clearly lead from one small setting, spanning only few rooms, to the next one. Each being self-contained, search space remains limited even when logic fails. Most “puzzles” stay within the standard range of finding keys to open locked doors, or go completely pseudo when the player receives two handsful of items, but also a clear recipe written in a book or similar how to proceed. 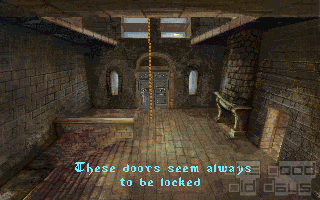 When fights occur, it is almost exclusively one-on-one duels using swords, maces and axes. Much more manageable than all the shooting of the previous Alone in the Dark games. Defeating the one enemy in the game using a ranged weapon involves a small puzzle even, just like one other (close-ranged) foe. On low or standard difficulty, life energy should be easily sufficient.

In spite of trial and error gameplay (Whoops, didn't expect a demon attack there! / Ouch, I shouldn't have run across that pentagram!), the linear structure and the constant chase nature of the challenges keep the game flowing pretty well. The player always has something to do, she's always kept on the run.

So when William can finally take “his” Juliette (the real one) back into his arms, it doesn't feel like time wasted, the handful of scenes which turned just a little frustrating forgotten. P.S. William kisses with his eyes staring wide open, while Juliette closes hers. Bad omen for their life together. Though we will never know what happened to the two, as no further games were released. Did those planned sequels become victim of the divorce proceedings? 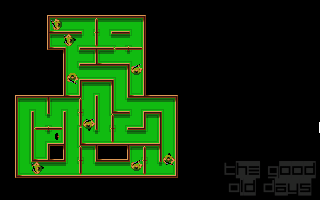