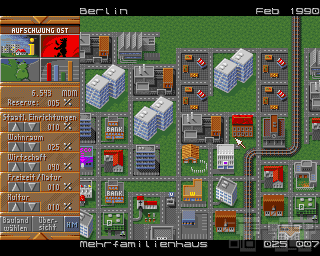 By 1993, all those with a clear mind of their own must have had realised that financing the so-called German re-unification wouldn't be possible with just petty cash (as promised by then chancellor Helmut K.). On the other hand, things didn't look quite as hopeless as they do now. Meaning it was the perfect point in time to demonstrate the issues in the process of eliminating the effects of 40 years of mismanagement. Aufschwung Ost was a topical game for sure.

In line with the main political actors of the time, the game's outward appearance is rather dry. There is a somewhat useful, but dowdy map of the country complemented by numbers and diagrams directly from the typically German business simulation genre from hell. The theme is anything but sexy. Let's dive into the dark corners of run-down infrastructure, bancrupt companies sucked dry by turbo capitalists and desillusioned Easterners nevertheless…

The game begins in 1989 after the so-called turning point of toppling the socialist dictatorship in favour of a puppet regime of the west. Western head of government Kohl had promised flourishing territories, so let's make them in-game reality. The state's bank accounts are still well-stocked, but even this money is easily dwarved by the immense problems. The aging power plants are anything but reliable and the connected grid is close to collapse anyway. Transport infrastructure leaves a lot to be desired. Industry is in a sorry state. Contaminated ground is waiting for detoxification. The recently opened borders don't just lead to repeated claim of “welcome money”, but cause a mass emigration towards greener shores. How can all this be mitigated? 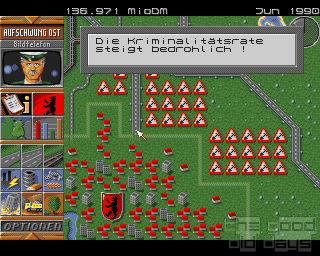 Let's turn the country into a big construction site…

The game's focus on long-term development is commendable. Success is measured not just by optimizing towards the next round of federal, state or local elections, but by actual, fundamental improvements. The fact that the definition of improvement is limited to economic policy is well within the spirit of the time.

Change is slow to take effect. Measures take their time to have a noticeable effect on conditions. This makes it necessary to anticipate, make forward-looking policy. The effect of today's decisions have to be projected in the player's mind taking into account current state plus already running projects, as it won't suffice to wait for one project to finish before launching the next one. Interdependencies have to be considered.

In spite of the overall Herculean task, the player is well guided when it comes to the details. For each city, there are clear tasks and even small extra missions which are either announced at year-end summary or come in via video phone. This gives structure to the micromanagement tasks. Concerning gameplay, each turn represents one month, but within the turn, a real-time countdown clock is ticking. Even the most efficient player won't manage to address all open points in one turn, making permanent re-priorisation necessary. 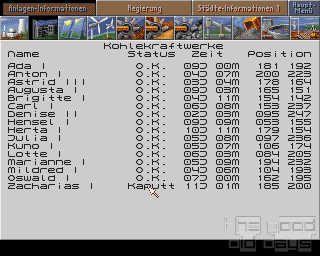 The rather stale presentation even turns out to be rather helpful in this respect. The clear layout enables a good overview and meaningful lists actually show relevant core information once you've learned how to read them. Most surprising, you can even jump directly to cities from there just by clicking a name, removing the necessity to manually search the map – it doesn't get more comfortable.

From day 2 on, the simulation strays from the actual historical development, though. The player is actually put in the role of a de facto dictator who neither has to fear being voted out of office, nor has to listen to or discuss with unruly inhabitants or regional representatives. Instead, you have direct control over the complete state finances as well as authority over city planning throughout the country. Social participation? Don't even dream about it.

There are very few limits. What needs to be respected is the separation of state versus city finances. Investments on country level are taken from the former whereas construction within the city limits have to be financed from the latter. If, for example, the city of Gera requires a new police station, the state can't just jump in – local tax income has to be saved up until sufficient money is available. 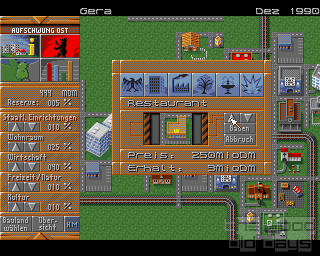 The simulation of the economy is quite similar. Privatisation, as in the real work, doesn't take place in the game. On the contrary, the player-controlled state will continue to build coal mines, farms and even restaurants. The state-controlled in-game economy therefore even surpasses the actual GDR. A country which remains on the world map in the game anyway. West Germany remains inaccessible throughout the whole game, just like all other surrounding countries. One could suspect that Oskar Lafontaine, candidate for chancellor of the socialist party at the time, who proposed to keep the GDR in a detached economical bubble for several years, was among the game's designers.

Though even state-intrinsically, the limits of the simulation become apparent over time. Although there are a number of cities each with their own problems, the landscapes in between are nothing but empty space for roads, highways, railway tracks and heavy industry. Supply and service infrastructure issues of non-urban population and rural exodus don't exist in the game. Although cities have influx and emigration of population and the reasons are usually well comprehensible, it is never clear where these people come from or go to. It seems like each city is simply simulated individually, the designers shying away from the complexity of a holistic country-level simulation.

Things therefore remain one-dimensional all around. Population ageing? According to the manual, a static age distribution is considered. Adaptions within the overloaded social systems are therfore unnecessary. Rising crime rate? The countermeasure the game knows is to hire more police. Crime prevention by increasing social living situation isn't an option.

Meaning much more could have been built from this quite solid and entertaining foundation. Particularly since – it is worth mentioning once more – the game interface is quite remarkable for a game from that time, pleasing even spoiled players of today. It is just that the core of the game, the simulation of the country, eventually leaves too much freedom to the player. The dilemma of politicians in our post-modern times which began right in that historical moment the game simulates is actually that external factors not under their control have a much stronger influence on the state of society than what they can possibly do. All they can set is basic regulations, frame things here and there, and then hope for the best. Aufschwung Ost could almost be considered a subversive antithesis of the self-regulated free market paradigm. That is, if the suspicion that the decision towards direct player control having complexity reasons wouldn't be there. 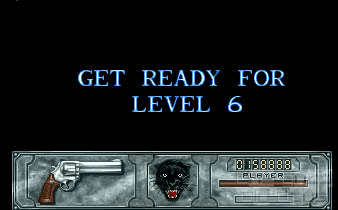