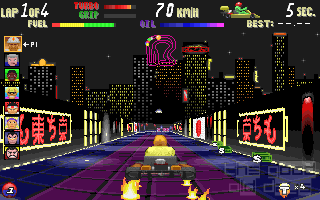 The mid-1990s, of course, were the time of console-style racing games. With less coverage in the specialised media than those more and more "realistic" ones (i.e. not realistic at all as far as driving mechanics are concerned, but using the latest graphics engine at least), the "fun racers" actually managed to carve out a niche of strong mainstream appeal, to a large degree thanks to Nintendo. 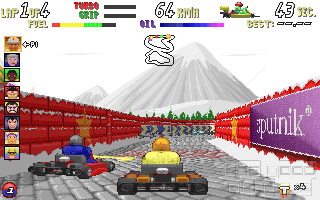 SuperKarts occupies a strange middle ground within this genre scope. For sure, it's not up there with the graphical quality to compete in the high end arena. Yet, it's not quite as cartoony as to compete on the other end of the spectrum.

Meaning although it's certainly designed as a party game to quickly pick up without a huge amount of preparation to play either with two on a split-screen or with up to eight in a network, and it works really well as that, its feature set is still mostly down-to-earth. You earn price money for placing well, spend it on upgrading your kart, and the only real differentiating factor on the road, apart from raw skill, is the availability or non-availability of turbo bursts.

Where SuperKarts shines is the course design. All have clearly distinct settings (cliché backgrounds per country) and short, but memorable laps, with hairpin turns, short alternate branches, special sections such as wet or slippery ground, extras randomly appearing etc. Even with maximum setting of selectable laps, races never take really long, so the usual issue of racing games where one player is clearly in the lead and although obviously nobody will have a chance to catch up anyway, the race will still drag on for a loooong time does not occur. 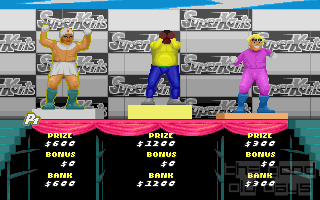 Maybe looking back a bit further in gaming history is actually the more promising approach here. SuperKarts actually has less in common with its contemporary racers rather than Super Sprint and its variants, as quite popular throughout the 1980s and up until the early 1990s. Just that the graphical perspective has changed.

This formula may not have been en vogue so much anymore, but it still works obviously. Speaking of graphics, however, although mostly sufficient, what you'll sometimes wish for is a higher resolution. In places, it can be hard to make out the direction of a curve from a distance, even when there are arrows pointing, because even those arrows are just too coarse to identify in time.

Apart from that, no complaints. It will obviously be next to impossible to play in a local network these days, but split screen remains a timeless chance to have some quick fun.