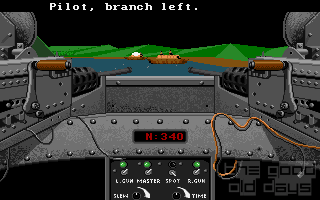 A river boat combat simulation? Certainly sounds novel compared to the hundreds of submarine, battleship, tank and helicopter simulators (not even to start with jet fighters…). Diving straight into fairly modern-day conflicts, the campaign encompasses scenarios in Vietnam, Colombia and the Panama Canal. Giving the game a slightly icky feeling right from the start. Anyway, let's try and judge it by merits of playability.

At first glance, it seems like a good idea. Cruising down rivers, the typical issue of being lost in two-dimensional, open space (as in flight simulations and the same for submarines) just won't occur. On top, the small gunboat is operated by a crew of only four, i.e. potentially manageable by a player in its entirety. Well, almost. 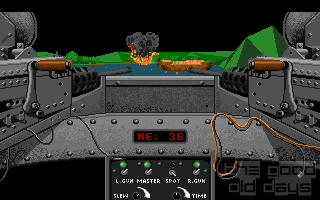 The idea here being that the player can take any of the four posts while the others are left to the AI under general player guidance. I.e. if the player takes the wheel, she can order the others to open or cease fire. When the gunners' performance leaves something to be desired, control of the boat can be left to the AI instead, at the costs of some rather sub-optimal steering, but orders like turning around or whether to go left or right at the next branch can still be given.

Before blindly opening fire, it is usually a good idea to first identify the target. Killing civilians, allied soldiers or hostages doesn't further the career. Though when an enemy has been spotted, anything goes. The different kinds of guns all being equipped with unlimited ammunition (the manual explains this in the way of the boat just being stuffed with fuel and ammo, enough to last days), accuracy clearly becomes a non-priority. In face of tougher enemies, such as tanks or helicopters, this restriction of the simulation for sure is to be applauded.

The simulation aspects, in any case, take the backseat gradually. The likely player choice is to stay at one of the gun posts most of the time. This actually turns Gunboat into a sort of early railshooter: being driven around automatically, try to take out/down the enemies swooshing by. OK, not swooshing by, it all goes at a rather leisure pace. Nevertheless, the overall feeling of player involvement is rather similar when taking rough aim and blasting away at those baddies. 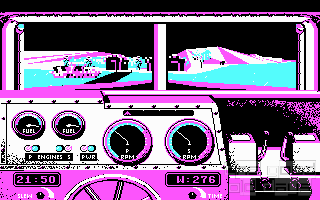 Needless to say, don't play in CGA unless you have a good reason to

Though speaking of enemies, as for the player support AI inside the gunboat, their behaviour is not exactly as expected. What's the picture we all have in mind from the Vietnam war? Certainly not open confrontation, is it? No, it's small enemy commando units appearing out of nowhere, taking their strike and disappearing into thin air again. In this game, enemy soldiers will instead be waiting at the river shore, open fire at the boat and keep standing there even when fired at!

Restricting variety even further, missions take place on only one map per setting. Meaning while in Vietnam, you will get intimately familiar with this one creek which you'll drive down repeatedly to fulfil all the consecutive tasks. At least the branching river structure sends the player to different corners at times.

Although a little more freedom is given to the player, the Accolade connection could indicate this one should be interpreted as a sort of sequel to The Train: Escape to Normandy. None of the same people were involved according to the credits, though graphical style and gameplay is finally quite similar. Only on the cover, the games pretend to be something different. Not necessarily a bad thing, as that earlier game proved quite entertaining overall. Though Gunboat doesn't manage to break out of the also quite limited gameplay corset, either. 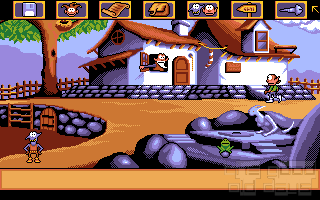