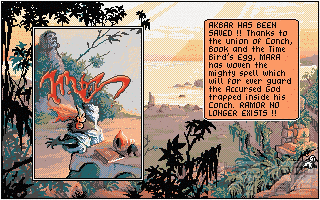 Following up on their first attempt at a narrative comic book conversion (i.e. not counting Asterix or Tintin platformers, the arcadey North & South etc.), Infogrames tackled The Quest for the Time-Bird. You may not have heard of it, since the French have their very own, strong comic book tradition. It's a fantasy tale featuring an ageing, battle-hardened warrior and a top-heavy young woman on a quest (surprise!) to stop an evil magician from escaping his mystical prison to enslave the world. Typical for French comics, it includes a number of shady characters, dark themes, pulpy imagery, plot twists and ends on a rather unhappy note.

In a rather bold move, players are given total freedom how to approach the task. Various places can be visited as long as one stays within the deadline of nine days. Although each location has its own “puzzle” (more about that later) to solve, there are dependencies between them, for example when one can only be successfully finished after recruiting another character or picking up an object elsewhere. Finding the right sequence of events therefore is key, taking into account further constraints. Visiting the closest location, the locals demand you to sacrifice your flying mounts? Good luck walking through the rest of the world. Unless you find another means of transport later on, of course. 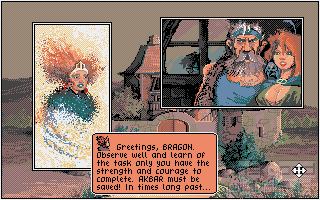 Off we go on a quest

The same challenge logic is applied on a smaller scale to each location. The task is always to figure out the right sequence of actions. This applies to multiple choice conversations (how to appease the raging priest?), use of an adventure-like objects and verb menu and even where to move to within the small panels which open showing the current surroundings.

The issue with all of this is that said challenge really only lies in having the patience to perform an exhaustive search of the highly branching set of options. Imagine being in a giant maze where each room has two or three exits. Going through a door, you find another room with two or three further doors. Behind each of which there are more doors etc. Yet, there is absolutely no indication which path through the rooms/doors may be the right one. They all look alike.

This is how The Quest for the Time-Bird plays. When randomly clicking on room exits in the pop-up panels, literally. When trying to figure out whether to “charm” or “threaten” another character, it's not fundamentally different, either. Especially when you have no real clue what you want from these people anyway.

There is no way to find the one true path but try everything out. All other paths lead to failure. In merciful situations, instantly. Typically, though, it lets you play on without communicating the dead man walking state. Even learning through failure is therefore often hard, since it is not really apparent what other alternative would have lead to success. 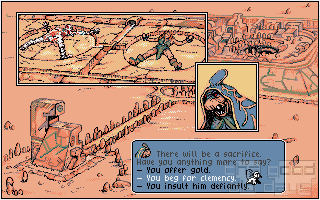 That is because communication to the player is not exactly a strong suit, either. Places, objects and characters just appear without proper introduction. One never learns about characterization or motivation. At least not in a timely manner. Readers of the source material may be familiar with the situations and people presented, though that's the only excuse imaginable. Everyone else will find themselves baffled when some guy who just stood around in the background so far suddenly bursts out: “He shouldn't have let us alone. Now our old rivalry will flare up again!” Huh? Did I miss some previous panel showing a closeup of the man with some accompanying inner monologue of my avatar stating he knows him from the past, and due to shared negative experiences, it may be hard to contain emotions? By this point, it is almost appropriate that even the winning path is not exactly a marvel of storytelling, remaining sketchy, mechanical and even original ending twist has not made it into the game.

The one thing it has to show for itself are excellent graphics. Digitalized from the original art, visuals are appropriately moody in typical low fantasy fashion. Even though only 16 simultaneous colours are used, intelligent use of palette and dithering work out fine. Even animations are up to good standards of the time and at least don't spoil anything (most illustrations remain static anyway).

Though what's the use of this great outside appearance if the game inside is no good? Compared to Passengers on the Wind, it's an improvement insofar that it actually gives the player proper control and agency through a clear protagonist and some freedom of action. Nevertheless, the action then comes down to randomly failing, failing and failing while blindly stumbling around and – the worst sin in a narrative game – not even experiencing a good story on the way. Meeting a number of interestingly designed characters with - as far as the game is concerned – no character. Visually striking empty shells devoid of everything. Still a long way to go to have a real interactive comic book from here.

Maybe it could be sort of nice to play the game afterwards, as a sort of "second look". Standalone, it's not really enjoyable.
Herr M.:
The game sure looks impressive! It has got that distinct spirit of adventure from 80ies pulp fantasy, which I am quite fond of. Too bad that judging by your review the game itself does not keep up with the presentation. So I guess it would be a better idea to get my hands on the actual comic books?
[Reply] 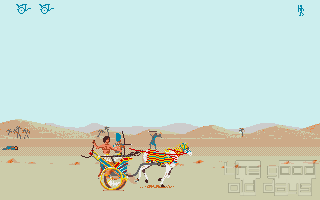