Paganitzu, Episode One: Romancing The Rose
for PC (DOS) 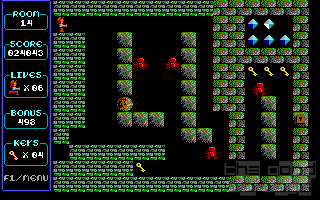 An Aztec temple complex in the heart of Mexico lies before us and bears the sonorous name Paganitzu, which means “Temple of the Gods”. It was first entered by an Indiana Jones knock-off named Alabama Smith. His ardent passion is archaeology. The casual gamer, buffeted by the monotonous everyday world, is allowed to slip into his role and give free rein to childish curiosity or even the adult urge to explore.

Our hero needs neither whip nor pistol to brave the dangers of the ruin. Instead, the player must purposefully use his mind to solve some tricky puzzles in the 20 levels of the first episode. The levels each consist of exactly one complete screen, without the image being scrolled. The avatar is seen from above and holds his hands out in front in an uncomfortable-looking pose. He only needs them to move large round boulders. Apart from that, important objects such as diamonds and keys are automatically collected when touched and counted in a menu on the right-hand side. 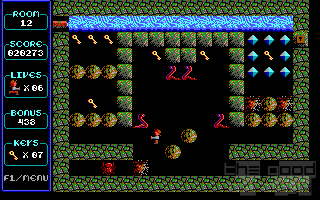 That is already the complete repertoire of abilities. He has to use them skillfully in order to be able to collect all the keys to open the level exit despite the many dangers. Snakes shoot small poisonous arrows that kill instantly. Gates shoot out of the ground and maul the player in a bloodthirsty animation. Spiders run quickly along the perimeter of connected areas or walls. If you get too close to a spider, instant death occurs, too.

At first glance, this sounds like a lot of action. This is not the case, at least in most levels. Success comes more from planning the path with foresight and especially from moving the boulders sensibly. These stones can also be thrown into the water to create an accessible passage. In addition, the player encounters teleporters that are not directly visible, but which abruptly beam the player through the level when he enters the field. Especially in the water levels, this provides a way to get from one island to another. Since the teleporters cannot be seen directly, their location must first be determined by trial and error.

Secrets are also hidden in some places. When you discover them, a “bonus screen” appears. For example, the verbalised lyrics of an imaginary rock band Daggers'n Roses. 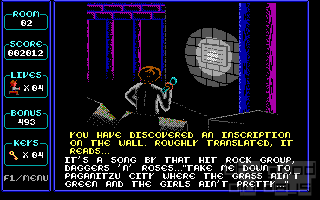 Song lyrics on the wall

The name was obviously chosen in reference to the first two episodes (Romancing the Rose and Quest for the Silver Dagger) and as a homage to Guns'n Roses. A kind of humour that is quite obviously from the 80s. The humour in the 11th level is particularly obscure: the easy path is a few steps straight ahead to the level exit, while the difficult path winds its way through the screen along impossible paths. The whole thing is garnished with the statement that it would probably be a difficult decision which path is the better one.

If you get through the levels quickly, you can count on an additional life every second level. This depends on a time bonus for reaching the exit quickly and, of course, on the number of diamonds collected. A high score board also gives the ambitious treasure hunter a certain incentive to collect as many points as possible. Irrespective of the bonus lives achieved, however, you can also freely save at any time. The shrewd player of course makes extensive use of this and prefers to load an old score rather than lose a life. Despite all this comfort, I would have liked to see a “move back”-button. It's easy to go one step too far or accidentally move a boulder a little too far.

The programmer of the game named Keith Schuler did not use a level editor, but coded each level individually. This is noticeable in a positive sense, in that the levels are really quite different from each other in the way they are made. But also in a negative sense. Because in level 16, unique sideways-sliding walls appear throughout the game, which simply cover the player as they slide to the side, causing him to disappear behind the wall. Since this is a bug, you have to reload the level in this case. Hopefully you have saved before! Also, although the difficulty increases as the game progresses, it does so erratically. So some levels feel much easier to master than their predecessors. Keith Schuler has obviously estimated some of his ideas to be more demanding than they are in practice for the player.

The technical realisation of the game is alright overall, but by no means top class. The control system is a bit fiddly in some corners. Directly tangible, there is no obvious flaw. But especially in hectic situations, there is a lack of fluidity in the movement of the figure. Sound effects are present, but take some getting used to. For example, the tripping steps of the character produce shrill choppy sounds from the PC speaker with every movement. At best, this can get on your nerves a little, and fortunately it can be switched off completely. Music via the Soundblaster is not offered. The graphics are also only middle class. For example, the boulders rather remind me of oversized pancakes. The standard video mode is EGA. For the hardcore fans, the CGA palette is also offered.

In my review I will limit myself to the first of the 3 episodes, which is available as shareware and may be copied for free. Alabama Smith, starting from archaeological research, goes in search of the crystal rose (Romancing The Rose), which is supposed to bring inner peace to its owner. He suspects that this artefact can be found in Paganitzu. If the first title arouses your curiosity, you will have to buy the other episodes from Apogee for money, just as usual from this publisher. 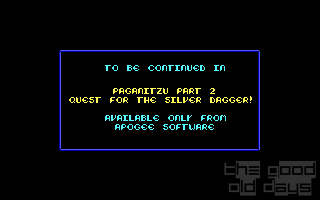 Therefore, a story should apparently connect the individual episodes. To this end, a lot of imagination is demanded of the player in the intro with predominantly sparse-looking graphics and relatively much text, as well as a matching outro. At the end of the first episode, the actual villain of the trilogy introduces himself, who bears the catchy name Omigosh. This, of course, immediately arouses associations in the native English speaker with the exclamation of horror “Oh-my-gosh”. And Omigosh does indeed live up to his name and seeks to wipe out the entire human race with hordes of undead. There is a highly ironic undertone that shifts the absurd story into the realms of bizarre humour and tries to turn Alabama Smith into a funny anti-hero.

Paganitzu is a shallow game that you can play on the side. Perhaps just the thing for the casual gamer. A game without any particular depth, to quickly escape the horrors of the everyday world. The puzzle elements ala Sokoban are elegantly combined with the action elements like the fast-moving spider into an easily digestible mixture for explorers of all ages. I especially liked the many different ideas that make each level unique and at the same time encourage creative thinking and the ability to combine. Embedded in the typical Indiana Jones-feeling of discovering something completely new and avoiding deadly traps in a clever way, Paganitzu at least fulfils playful needs in terms of content. Unfortunately, the overall presentation can only be described as functional and modest. As a result, the game offers too little incentive to inspire the spoiled casual gamer. 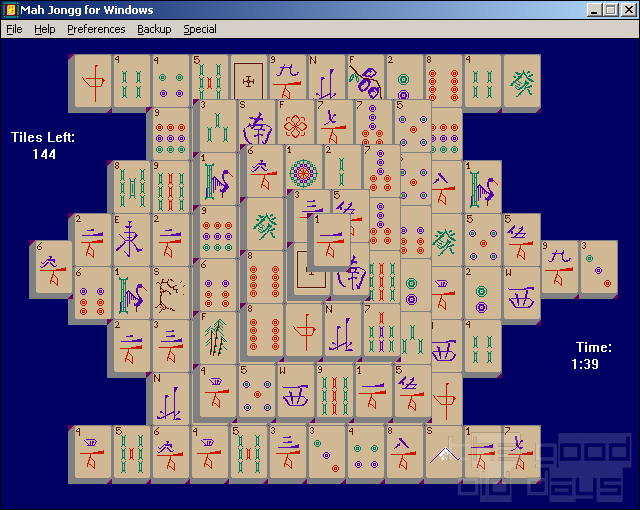