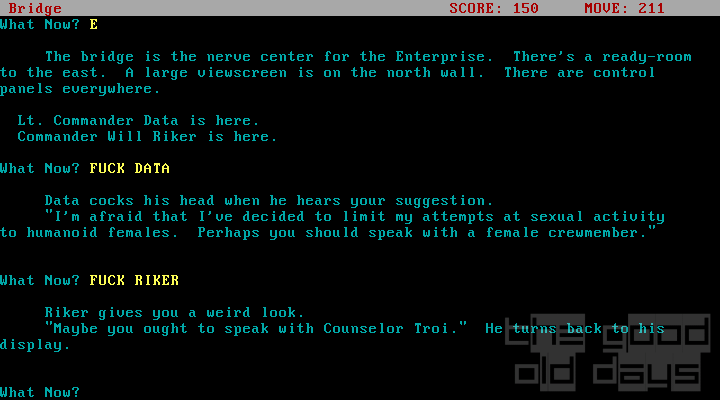 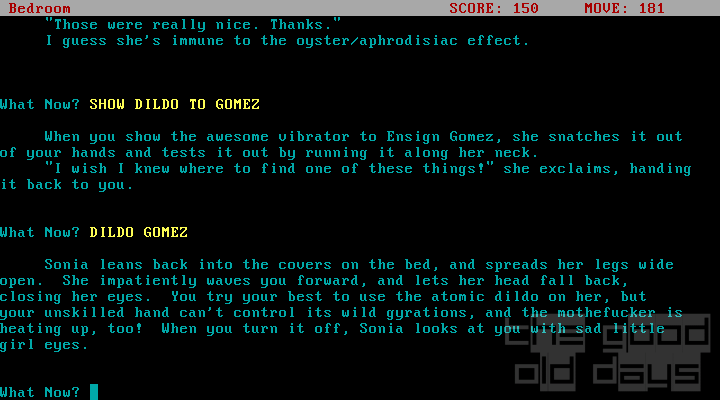 Better think of something elseâ€¦ fast!

With all this in mind, XTrek didn't do anything particularly special when it was released in 1991. Nevertheless, it hit the world with the impact of a meteor big enough to make dinosaurs extinct. For decades to come, all activity around pornographic text adventures (all of them, not just this one) would be presented and discussed in the newsgroup alt.games.xtrek, because this was where afficionados gathered. Even still when Usenet was mostly superseded by web forums. What made this particular game so special that it turned into such a phenomenon?

First of all, it was of course a match made in seedy heaven. Star Trek: The Next Generation was at the peak of its popularity. Computer games, and text adventures even more so, being an extremely nerdy medium back then, appealed to quite a similar audience. As bland as the clichÃ© may be, but apparently, there was a large audience of young men dreaming of sex in Star Trek uniforms. Exactly what this game promised and delivered. It was the same effect that made Gillian Anderson “most faked celebrity” in the second half of the 1990s.

Though then, also when looking at the game itself, XTrek did set itself apart from the bulk of the genre. Where most titles focussed very tightly on their purpose of male wish fulfillment, threw players directly into the scenario directly when naughty things were about to start and got to the point within a matter of few moves, putting one or two minor obstacles at best, XTrek offered much more game in comparison. 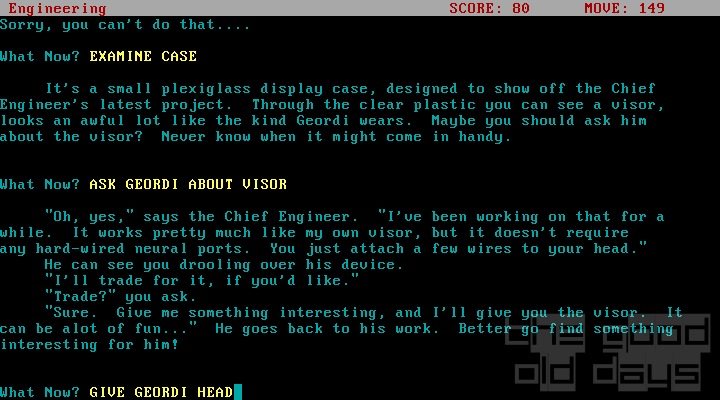 What else could you possibly offer him?

Don't overestimate this, of course. The stated goal is still all around performing and observing as many sexual activities as possible. There is no plot to speak of beyond that. Though the number of possible “targets” plus male supporting cast, all spread around a ship made of no less than 44 locations, increases perceived complexity immensely.

A more analytical look reveals actual complexity to be rather easily manageable, of course. The typical challenge lies in matching the right object with the right person. Either to trade for another object or to persuade her to engage in carnal activities. With overall about three handfuls of objects existing in the world, identifying the intended pairs isn't too hard.

On the side, typical issues of the AGT development system occur, of course. Verbs and nouns only exist where actions have been explicitly defined. Otherwise, even generally working actions will be rejected with unhelpful error messages. Though then, this total lack of pretense of understanding unsuccessful player input does actually make the solution more straightforward, as no red herrings exist anywhere. 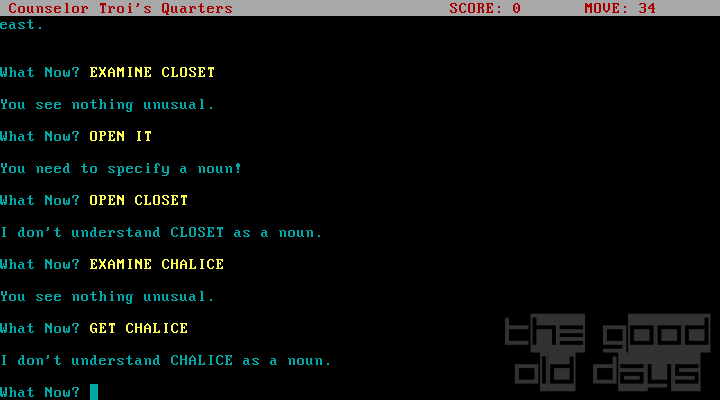 Though, and that was the thing, all this was quite in line with the bulk of non-pornographic text adventure games. Simplistic gate-keeping puzzles? Check. Fetch quests? Check. Paper-thin characters who only exist for game-mechanical purposes? Check. A mostly empty world? Check. But then, what it expects of its player is at least reasonable. There are no deaths and no dead ends. And believe it or not, there is an in-game adaptive hint system!

Finally, what about the sexual contents? In our days of ubiquitous fan fiction, re-visiting this one may admittedly a bit of a let-down. When it comes to its core contents, the game remains weirdly bloodless, the descriptions devoid of details and variety. Not even kissing is allowed. Few sentences in, the act is reliably over every time. Comically, the same acts can be repeated at times, without the game acknowledging it, making it even harder to take things semi-seriously.

In spite of everything, what the audience demanded more of was obviously not the plot, not the puzzles. XTrek author Badman followed his hit up with A Night with Troi. Not more than a shell, a pretense at being a game, which essentially just boils down to its player selecting a sex position to put Star Trek character Deanna Troi into and then reading a slightly fleshed out, but still brief description of the act itself. Pornographic text adventures continue to be written to this day. The main innovation found in some works since those days lies in the attempt to make the sexual acts themselves somewhat interactive, going to large detail about clothing layers and body parts. Whether this makes it all any more appealing not being completely clear. Though apart from that, the overall complexity and approach is usually still according to the standards set by XTrek â€“ thirty years after its release. Talk about influential! 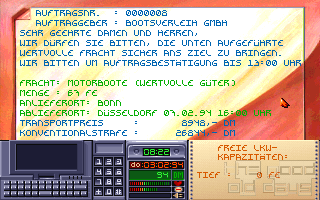