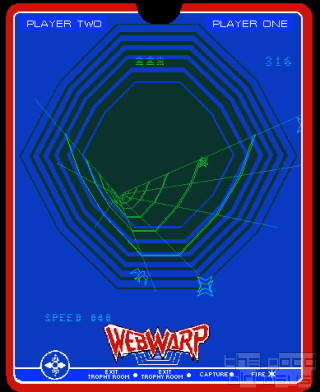 Definitely the Vectrex game with the best graphics I have played so far. It even has music, as well as sound effects!

You are an intergalactic animal collector. You are trying to collect all 20 species of creatures, all the while avoiding all those nasty alien star-shaped drones and , of course, the dragon that will attempt to shoot you with a fireball if you miss too often. Once you have captured a creature (does this sound like Pokemon? It sure isn't.) you still have to find the way out of the intergalactic webspace you're trapped in and take it to your trophy room (great animation).

Unfortunately, some creatures can only be caught at great speeds, that's why your minimum velocity increases with 10 each level. And believe me, it's VERY difficult to capture a creature when you're flying at a speed of 160 units!

You can control your speed with the up and down keys. Maximum speed is 240, minimum between 10 and 200. Move left and right with the left and right keys (doh) capture a creature with d (you will extend your trap, it will have to hit the creature, if you don't extend the trap the creature will kill you) Shoot all annoying aliens with f. Once you've found the (square) exit, go through to get to the trophy room. You can exit with either a or s. The music is great, and changes as your speed does. The sound effects are also good.

This game is loads of fun. I think an inexperienced player will catch about six creatures in a single game, an intermediate player about ten. I never got past 17. Can you do better? 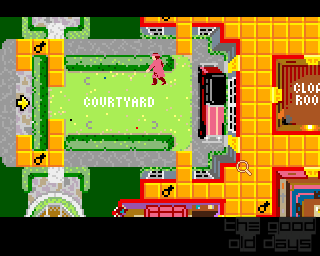