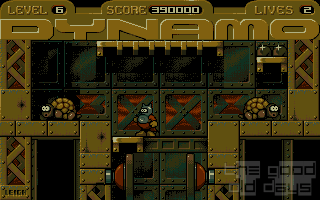 Some people want to reach high in their lives. For a retired superhero, this life goal has long been achieved and only very good reasons will induce him to get into his hero tights again. I will come back to details of this backstory later. In the end, the path of retiree Ernest P. Dynamo – better known as Captain Dynamo – once again leads further and further upwards in this exclusively vertically scrolling bouncing adventure.

This is because his superpowers do not include attacking with a weapon of any kind, but only jumping and, by additionally pressing the up arrow key, the super leap. The very sparsely distributed enemies can be eliminated by hopping on them. An easy task, as they crawl as if in slow motion. Captain Dynamo will also not encounter any bosses to prove his bouncing power. The only challenge is to reach the next higher platform by means of skilful jumps and sometimes additionally supported by springs.

It is mainly thorns that make life difficult for the player. However, electric arcs, beheading machines, pools of water or circling cleavers must also be cleverly avoided. Otherwise, a simple touch will result in death and the loss of one of the two lives available at the beginning, which cannot be significantly increased in the course of the game. Atmospherically, a futuristic undertone is conveyed. For example, floating platforms that are held in position by small control nozzles. However, there are also these old-fashioned elements such as springs or guillotines. 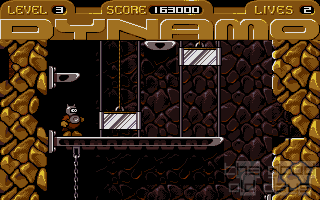 And off with the head

As a result, the design reflects the age-related clumsiness against the background of the hero's superpowers. The control of Captain Dynamo is flawless. The partially pixel-precise jumping is not directly unfair. The only bad things are the annoying avoidable mistakes, which, if you are not concentrated enough, quickly take you back to the start of level 1 and make the final level 6 seem an unreachable distance away. Yes, that's right: Saving the game state is not provided, nor is the password-controlled level selection.

In this respect, the game is objectively not really extensive or long, but you can't afford to make any mistakes along the entire route. In my opinion, this makes the game too demanding to get to the end without great frustration. The motivation here is the buttery-smooth scrolling, the well-made cuddly graphics and the fabulously good soundtrack. Admittedly only in Adlib form, but for a rather unknown jump 'n run a real catchy tune. The equivalent of a budget game is already in your pocket. Therefore, interested readers may simply try out the game for themselves at this point and not read any further from here on.

However, when looked at in detail, there are also some points of criticism. Especially with regard to the DOS version here, which looks very similar to the one for Amiga and Atari ST. The 8-bit implementations that also exist are in part considerably different, both graphically and in terms of content, and are not included in this review.

First of all, there is the rather striking sluggishness of the sprite. The movement is graphically wonderfully accomplished: the cape flutters in the wind and the animation is comic-like and droll. But the flow is almost painfully slow. One instinctively looks for the turbo button on the PC. The in-game music, as described above, is fantastic, but there is no FX at all. The picking up of diamonds is professionally staged by a great animation with display of the corresponding score. But there is no clink or clang from the loudspeaker. 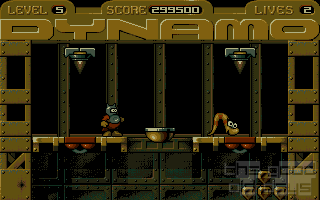 Snake, I'll get you!

The level design is very uniform. In the whole game, the player only sees two different backgrounds. Where the enemies and traps remain the same in both “worlds”. Those who have reached the end of the game despite the lack of a save option expect at least a beautifully designed ending screen. In fact, only a text is displayed that refers to the successful rescue of the world. In the same way, an intro screen is missing when starting the game. And last but not least: the lack of reference to the story already mentioned above.

The absurd funny story about the superhero Captain Dynamo could certainly have been used to great advantage for the appearance of the game. This reads as follows: A certain Austen Von Flyswatter steals the largest diamond collection in the world and hides it on the moon. The rightful owner Lady Phyllis Uppenhoofen turns on her feminine charm to encourage retired superhero Ernest P. Dynamo to heroically rescue the riches. The graphic skills of the programmers shown in the game could have crafted a memorable setting out of this that would have made Captain Dynamo stand out from the crowd better and also deservedly so. In this respect, the DOS version still seems somewhat unfinished and remains rather mediocre in the overall context of the genre at the time. 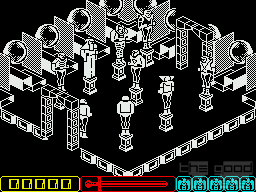