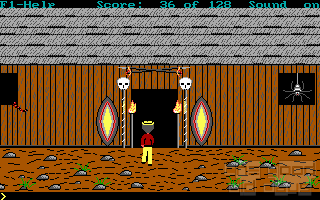 Hugo and Penelope just can't catch a break. On their way back from Europe, their plane spins out of control and crashes somewhere in the Amazonian jungle where our damsel in distress is promptly bitten by a poisonous spider. Time to find an antidote is short. 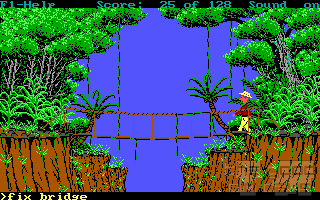 Oh no, another bridge!

Or so the game claims, because in fact, the player will have all the time in the world. In a broad departure from the series tradition, Jungle of Doom is a rather forgiving and fair game. Danger of death is absent, in spite of meeting an evil spirit, an obviously mad witch doctor (in an otherwise friendly native village), scaring and hurting an elephant (it probably escaped from the zoo), a collapsing rope bridge etc. Dead ends are also scarce, the few remaining ones likely the result of oversights in the design.

Puzzles are lightweight and even heavily clued at times. Still not exactly shining with originality, there are at least no major absurdity roadblocks anymore. Once again, there is a single exception where a hidden object has to be found in a seemingly random location, where there is absolutely no indication that it may be worth moving about around there. 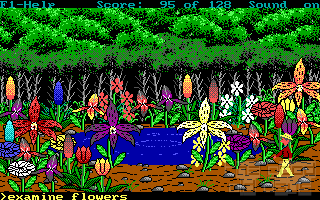 Visually vastly improved (even if somewhat samey) background scenery makes exploration pleasant. Not that there is a lot to explore. The game's size is back to the number of locations of the original. And with all those reasons to repeatedly restart removed, the game is quickly solved.

This pointedly shows Jungle of Doom's dilemma. On objective terms, it has been improved on all relevant points, but with all those negative peaks removed which otherwise drew the main attention, it has nothing left to hide its highly unimaginative game design. It's unoffensive, but lacks really redeeming qualities on the positive side as well. A feat which makes it by far the least memorable of the three titles. 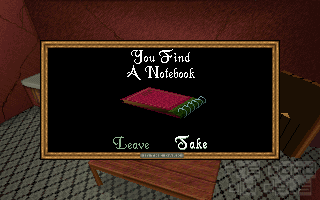