A quick glance at the screenshots of this game may cause some to assume that this is a digital version of the very well-known board game Othello, which is particularly popular in Japan. Unlike Othello, the present game called Spot is played exclusively on the computer. This is because the rules require a complex regrouping of the pieces for almost every move. This can be handled better virtually than with real board game equipment. At the time that the basic rules for Spot were invented, the Internet was not anywhere as widely spread as today. Therefore, the artificial intelligence became the adversary of choice. Competition between human opponents is still rather rare, in contrast to Othello.

The first release of the original prototype, which was never directly published commercially, took place in a double tracked manner. Under the name Ataxx, the game was initially brought to market as an arcade machine, and was later ported to almost every home computer system of the time. 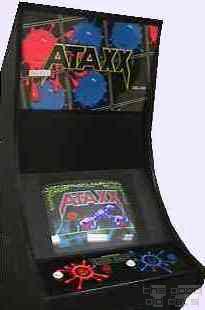 Remarkably, a funny mascot of the soft drink manufacturer 7·Up added some spice to those subsequent ports. In the NES version for example, this so-called Cool Spot performs small acrobatic gymnastics on the board with every move. This was a try to entertain the player while he actually was working on a hard-thinking game. These animations are comparable to the movements of the chess pieces in Battle Chess clones. The Gameboy version only accompanies the waiting time for the computer opponent's move with similar acrobatic gestures by Cool Spot at the edge of the board, who does not directly enter the playing field.

Two players start with their two pieces on the opposite corners of the board. With each turn the opponents can either duplicate a piece or jump across one adjacent spot onto a previously unoccupied square. While duplication increases the number of pieces, jumping is just a movement of an existing consisting piece. If a piece touches a piece of different colour in one or more of its 8 adjacent fields, the pieces will change colour. The aim is to occupy all of the 7x7 squares with one's colour and end up with the most pieces on the board.

In addition to the 5 basic playing strengths of the computer opponent, the maximum thinking time per move can be limited to 5, 10 or 20 seconds. The start menu offers access to a playing field-editor. It can be used to make certain squares on the board inaccessible. You can also just choose one of the 512 pre-programmed patterns. The blocked fields do not only have impact on the view but especially the game tactics.

In some constellations of these edited playing fields, certain spots on the board are decisive for winning the game. The AI would therefore have to occupy these squares as early as possible, since the overall victory depends on it. But the Gameboy AI usually does not do this! In such cases you can trick the AI and beat it quite easily including up to level 5.

Apart from that I must admit that I suck on playing the unedited board. The AI seems to be far superior to me on the 5th level. A shaming score of roughly half the points compared to the computer’s is a usual outcome. On the other hand with quite little afford one can be victorious in level 1. To conclude I have to admit that Spot can still be challenging even for advanced players in spite of running on a 30 years old handheld system. The clones on today's smartphones are perhaps even stronger and faster after all these years, but offer no real added value to the averagely skilled, nostalgic player.

It's just a pity that the 2-player mode was not implemented by using a game link cable. Perhaps this would have made the competitive character of this board game more widespread. Especially since the possible limitation of the thinking time would have challenged both players without causing boredom. Handing the Gameboy over to the opponent after each move, as in the present “Pass-And-Play” method, is quite inconvenient.

Another negative aspect could be the lack of some sort of reward for winning more than just the game in question. The player could anticipate something like the launching rocket in Tetris or the famous fireworks in Windows solitaire games. And the 7·Up mascot would certainly have had potential for such forms of achievement-gimmicks. Nevertheless, this straightforward Spot-port for the iconic handheld is definitely good enough to play a quick game in a good retro style manner. 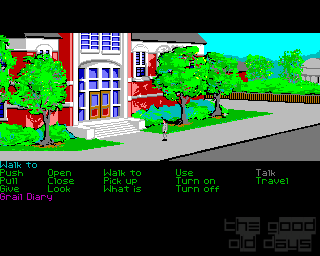