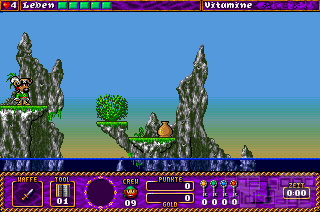 As a total failure at any game requiring physical skills, variants of the usual gameplay are very welcome. Traps 'n' Treasures adds small puzzle elements and a non-linear level structure to the jump'n'run formula. Doesn't sound too bad, does it? It isn't.

Just that totally against the trends of the time it came out, it sports a rather unsophisticated look. Small sprites move about visually uninteresting platforms. The animations, made of few states, don't help, either. Only the pirate theme scores some points in this respect. 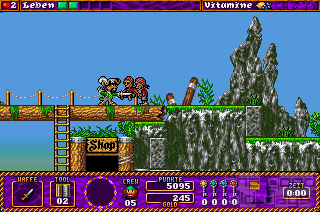 The latter is stringently followed throughout. Long passages have to be passed diving under water (protagonist Flynn is able to hold his breath for longer than Guybrush!). The preferred fighting style is fencing, using a cutlass or a rapier. At least until you exchange your doubloons for more effective weaponry. Wet grottos harbour treasure chests just waiting to burst open. Avoiding hard landings after jumps, Flynn unfolds his Jolly Roger and floats down elegantly.

Four levels may not sound like a lot, but their size matters, and thus, Traps 'n' Treasures lasts even longer than some of its contemporaries. This is also due to the way the levels are constructed. Instead of just going left to right, they branch through doors, which in some cases have to be opened first. Finding the right paths and the right order of paths is one of the main tasks. Finding hidden objects. Pull switched and push buttons. Move blocks and carry them around in order to open up new areas. Keeping an clear head in these small mazes is not always trivial. 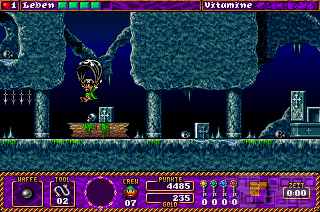 In other cases, play time is achieved through less desirable effects. Under water, Flynn is pretty much defenseless and, to make matters worse, moving quite slowly (including major inertia when trying to change directions). This leads to loss of quite some in-game life energy and out-of-game nerves. On solid ground, the joystick controls are “a little” overloaded due to restriction to only one fire button. How to pick up a crate again? First left, then fire, or the other way around? How to cannonball those blocks? Sure, jump, joystick down and then… press fire or not? It is rather unusual to be forced to actually have a ramp-up phase in such a game. Though at least it has to be admitted that fundamentally unfair scenes remain scarce throughout.

Traps 'n' Treasures is a decent game through and through. Nevertheless, it just doesn't trigger a real spark. Complexity and size of the levels could even been seen as hurdles these days. In spite of its casual appearance, it is quite meaty inside, not to be taken too lightly. This is really out of touch with today's zeitgeist. 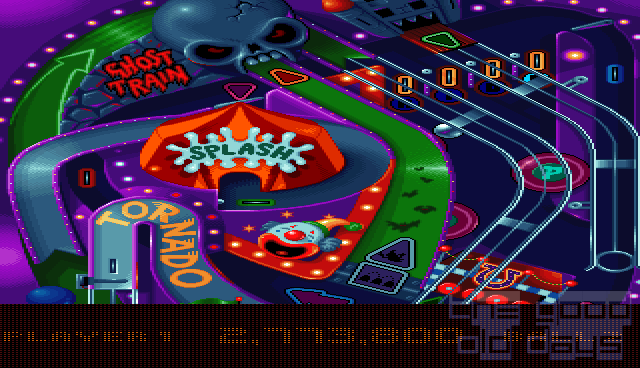