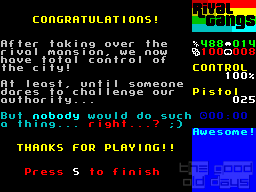 The war between two brutal gangs is choking the life out of the city. Police want to put an end to it… and decide to intervene to make one side win. Uh… right, doesn't sound like the most common police strategy, more like a really, really stupid idea. But anyway, here you are: infiltrating one of the gangs to support it in gaining the upper hand once and for all.

Rival Gangs distills the original GTA formula to its very core. Run and drive around a city. Kill as many members of the opposing group (one comically based on the well-known Spectrum limitation of colour bleeding) as possible. In whatever way. Mow them down with your machine gun. Run them over with your car. Shoot their cars with a rocket launcher. Snipe them from a (relatively) safe spot when they least expect it. 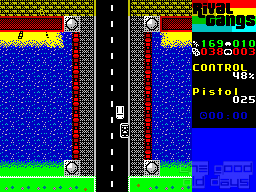 Killing members of the rival gang increases your gang's power. Once full control is achieved (in number, not in actual terms of control, but more about that later), one single taxi mission has to be achieved. Game won. Other than that, no missions. Just typical open world gameplay.

The game leaves its player total freedom how to achieve the global goal. Some players may prefer largely staying on foot, others may steal a car and just drive directly towards the enemy's headquarters. One way or another, each kill increases the “control” counter by one percentage point. Being killed decreases it by five percentage points. It could be quite easy if it weren't for a clever built-in balance routine. The higher the control score increases, the more aggressive and well-armed the enemies turn. Meaning the closer the player gets to the eventual goal, the harder the game becomes. Leading to the score going yo-yo towards the end.

While this desperate feeling of final stand may make a lot of sense both in terms of gameplay and “plot”, it is quite unfortunate how static the city remains overall. Halfway through the game, the eastern part opens up in an act of gating new players, but apart from that, nothing ever fundamentally changes. Particularly, the level of control is not reflected at all on the streets. You'd think that an increased control would imply more cars of one gang driving around, the losing side slowly retreating to their core districts, but nothing like this occurs. 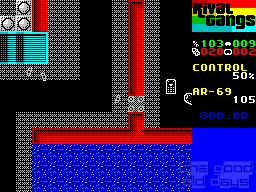 This is one of the indicators of the missing character which made the initial GTA games so successful. The comical set-up layed out in the documentation aside, there is not a lot of it in-game to speak of. Differences between cars are marginal, people are faceless, missions non-existent. It is really left to the player to make up her own story in her mind.

On top, non-existent driver artificial intelligence which will just run the player or any other pedestrian over, ram into slower cars from behind etc., really turns into a burden when trying to use vehicles. Mind you none of this happens due to enemies intentionally trying to harm the player. It's apparently just due to no notion of obstacle avoidance existing in the game code. While on the subject of stupid deaths, why on earth can't the protagonist use his fists, leaving him completely defenseless when no weapon has been picked up?

Oh well. Rival Gangs may feel a bit barebones once you get deeper into it. Yet, the foundation is there, and it's an impressive one. The city having just the right size to keep players occupied for some time, available gameplay easily sustains the motivation level necessary. It's a finely balanced work, one which would deserve an sequel, extending on worldbuilding and world simulation.

Mr Creosote:
Congratulations for getting it out! As it's now a commercial release, I doubt I'll play it, personally.
Presh:

Hope you can find time to give it a go!

If you entered it into a competition, I seriously hope you won

Thanks for the background & the outlook. I'll give the extended edition a spin for sure!

Thank you for the review! I have to admit, it is a very fair assessment of the game

Allow me a little back-story...

During development, I was persuaded to enter the game into the ZX Dev Media Remakes competition, imposing a tight deadline... so despite many nocturnal coding sessions and a neglected partner, expectations had to be lowered and planned features were cut!

Your review picked up a number of these missing features, sadly left out due to time constraints.

While I'm happy I even managed to make anything vaguely resembling GTA on an 8-bit micro by the deadline, my annoyance at the cuts was severe... so your prediction of a sequel is bang on! The extended edition (Rival Gangs EXT) will address most of the omissions you noticed, particularly some of the more frustrating ones which I'm happy to say have already been rectified or improved upon. The remainder are at the mercy of the machine's memory and processor limitations, but I'm confident of a much improved experience regardless.

I'm keen to read any further suggestions / criticisms, and would suggest the game's development thread on Spectrum Computing for these (though I will also check back here periodically) 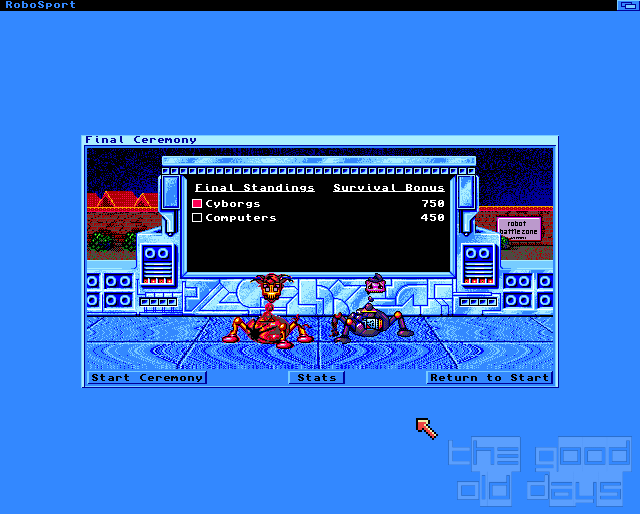