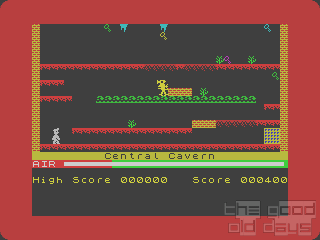 Manic Miner is probably the best known Spectrum game ever created. Not only it offered an unprecedented length of gameplay, it offered a reward for the first person to complete the game, lush graphics and the never before heard of in-game music.

In this game, you play as Miner Willy, who somehow broke into a strange cavern, discovering the remains of a highly evolved civilization. While the civilization perished, its mining robots and mutant penguins kept on working (not to mention the now legendary automated toilet seats), amassing wealth that you can now claim, if you make it out alive. Getting out alive is a challenge, however. You will have to work your way through 20 different rooms, in each of which you had to collect keys for a portal to open, avoid all enemies and watch your time; if you hesitate too long, you will suffocate.

Graphical-wise, the game was one of the best on the market. It featured lush colors and an unprecedented level of detail. Each room had its own theme, and each room was so different that you just kept on trying over and over again, only to get farther. Sometimes the graphics weren't too original - a Donkey Kong-style room, Pac Man-style monsters or the Monty Pythonesque feet that squished you in the Game Over screen were clear rip-offs, but they, too, added a certain personality to the game. Even more personality was added by the music. The title screen featured The Blue Danube by Johann Strauss, while the in-game music (did I mention this was the first game ever to feature in-game music), was a clearly recognizable “In the Hall of the Mountain King” by Edward Grieg.

The game was developed by Matthew Smith, the first true gaming superstar. Long before the dot-com craze and other excesses, he quickly became famous and rich, and always willing to spend his money - the prototype for the excess that came later. He originally wanted an 8-level game, but bragged that he could create 16 levels. Few believed him, and nobody thought it would be possible to do more. He created 20 levels and published it through Bug-Byte Software. He retained the copyright, and re-released the game (with minor changes) through Software Projects. A sequel that was as famous and well-received followed soon - Jet Set Willy. Since then, five more Manic Miner games and countless clones have appeared on Spectrum. Manic Miner and Jet Set Willy got both ported to every single gaming system available at that time. What Donkey Kong started, Manic Miner brought to perfection...

So what made this game so great, apart of the graphics and music? The gameplay was simply a work of genius. With only three keys (left, right, jump), the game managed to move you all across the screen. Each screen was very carefully designed to provide the highest possible difficulty without being actually frustrating. A cheat mode was available for you to practice different screens. Finally, the game offered to reveal a “secret word” to whoever finished it without cheating (the password was “swordfish”). Supposedly, the first to finish the game would receive a prize from Bug-Byte; I could not confirm whether this was true, though.

Overall, Manic Miner is one of the most influential and best known games ever released. It brought music into games, it successfully brought fast paced arcade laced with puzzle into your living room and until this day it remains the signature game for Spectrum. 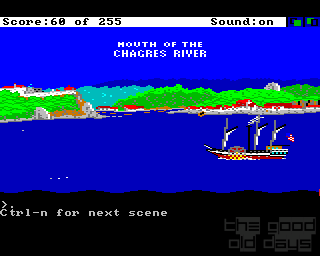