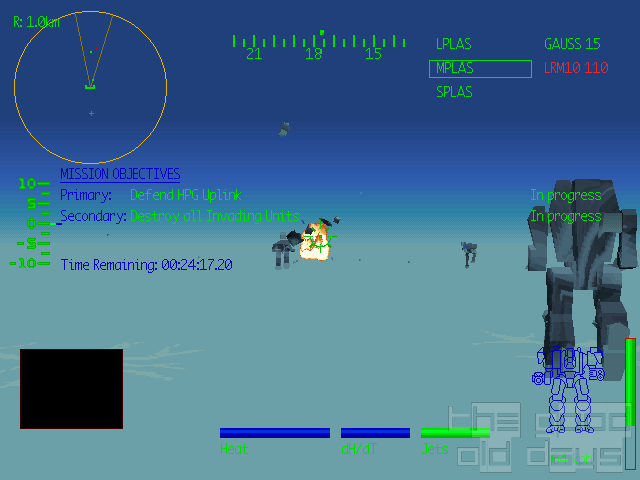 When the developers of the original, Dynamix, were off the market due to having been bought by Sierra, Activision put an internal team on making the sequel to MechWarrior. Performance issues had it stuck in development hell for over two years. Sierra/Dynamix humiliated them by throwing EarthSiege on the market, a game which didn't just look like a proper sequel, but played like it, too. Though there was still some fight left in Activision and they struck back.

What is striking is how different giant robot battle simulations can actually be. From the original MechWarrior formula, Dynamix and Activision went off into almost completely diverging directions. Whereas the former put the focus on character and equipment development over the course of a campaign as well as squad tactics, this officially licenced game doesn't have those factors at all. 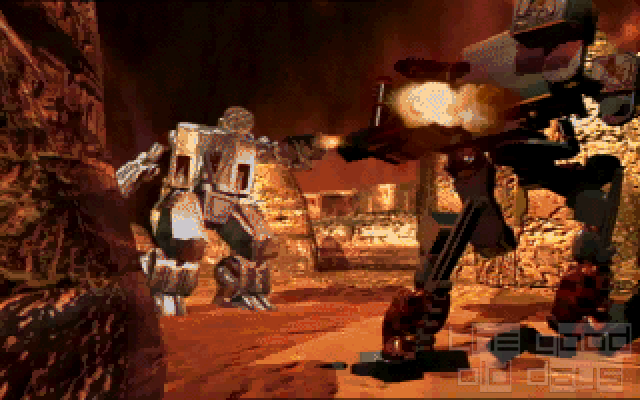 The intro promises a lot

Although introducing the clans, there is no salvaging equipment from the battlefield. Wouldn't have made that much sense anyway, since the scenario is clan versus clan, instead of clans versus Inner Sphere (the typical scenario to have a technology gap between the sides). Mechs can be customized for each mission (a step well worth it to succeed), but within the constraints of overall allowed weight, everything is always available.

Likewise, almost all missions are performed solo by the player. Pilots with different abilities don't exist in the in-game simulation. End-to-end, there is a single mission where there are friendly Mechs around, and there is virtually no interaction possible. Just don't shoot them and hope that they manage to blast some enemies.

With such restrictions, MechWarrior 2 must be an underwhelming game, right? After all, what's even left? Well, as a vehicle simulation, it is just grand! 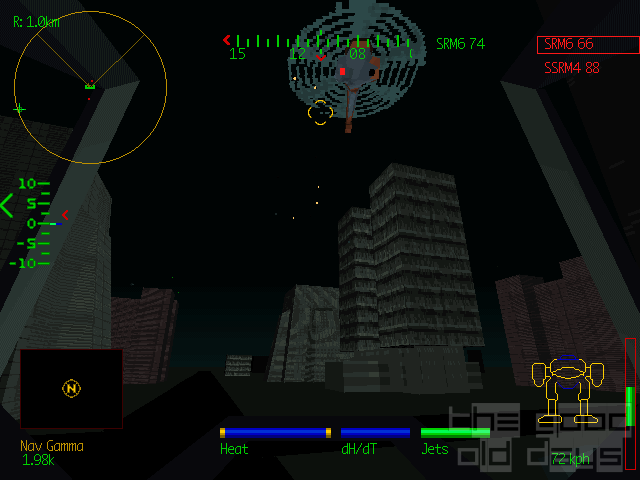 Activision focussed on making the core aspect of controlling this hulking battle robot smooth without dumbing it down. On the contrary. The simulation is enhanced in several ways compared to the predecessor. Hills can actually be climbed (instead of being pure window dressing), jump jets can be equipped to suitable Mechs, introducing a whole new dimension to the gameplay. Different view modes prove to be actually indispensable. Sure, the outside camera is useless, but the light enhancement and the schematic, high-contrast mode are a blessing. Choice of weapons and fire modes open up unprecedented tactics.

What's most impressive is that the controls, even when purely using the keyboard, remain not just manageable, but stay effective even in the heat of battle. A Mech is a highly complex apparatus, the player needing to control its speed and heading as well as (independently) the two dimensions of torso movement and trigger the firing of weapons. Three things (plus various other settings), only two hands. Concentrating the most essential functions on the numpad, i.e. accessible with only the right hand, works perfectly after the very useful training missions. Sorry, laptop users, you're obviously out. Optionally, the mouse can be used to control the torso/aim, which has its advantages in precision, but leaves a bit too many functions to the left hand on the keyboard. 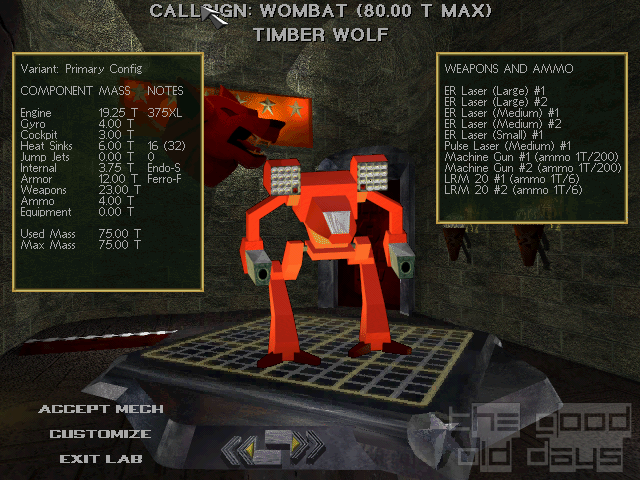 Similarly, the designers manage to keep most of the essential information on screen. Weapon status, mission information, heat status… the only oversight may be the inability to have nav point and enemy target information visible at the same time.

Graphically, three different resolutions are supported, from 320x200 to 1024x768, though honestly, there was no computer at the time which could display the highest one smoothly. The resolutions make no major difference in any case, to be honest. The world is built from gouraud shaded polygons, but lacking textures. It makes for a barren look which, however, isn't all inappropriate for this future world. The only somewhat problematic aspect is that objects appear quite late on screen, i.e. the visibility range is sometimes insufficient with no in-game explanation (such as bad weather conditions). When the first dedicated 3D accelerator cards arrived a short time after, dedicated versions of MechWarrior 2 even came bundled with some, finally adding textures, but not necessarily making it really better.

Instead of videos or rendered cutscenes between missions, production values went into audio accompanying the missions themselves. An appropriately exciting soundtrack, clearly identifiable effects and a female computer voice announcing the Mech's state as well as change in mission parameters aren't just excellent fluff, but even prove useful in a number of situations. This is one of the few games where switching speakers off really hurts. 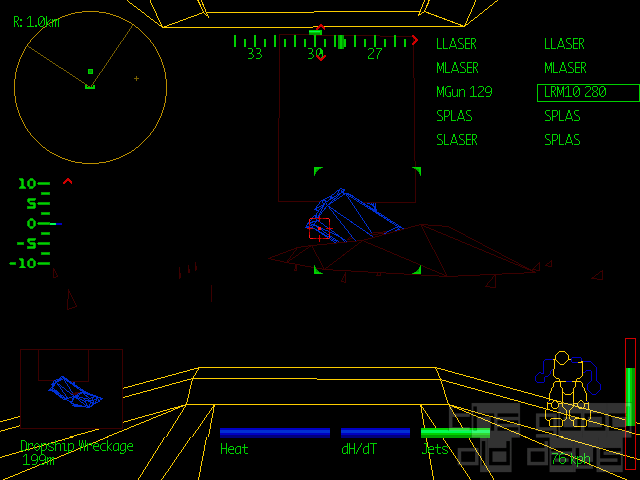 Speaking of the missions, we've already established what they aren't. Re-playing the game now, it is interesting how modern the set-up still feels, insofar that none ever takes longer than 5-10 minutes. Most of them task the player to destroy a specific enemy or a structure, sometimes coupled with some reconnaissance. The trickiest ones revolve around defending or escorting another vehicle, as in those cases, just outliving the enemies is not sufficient. Introduced purely in text, the mission descriptions unfortunately sometimes leave out essential details, such as the exact whereabouts of some targets.

Optionally, the player can immerse herself into the selected clan's world. The major events and the state of the global war is described in detail between the missions, though this information is not necessary to follow up with the next mission. Rising inside the clan hierarchy is done by winning duels with other Mechwarriors of your own side. 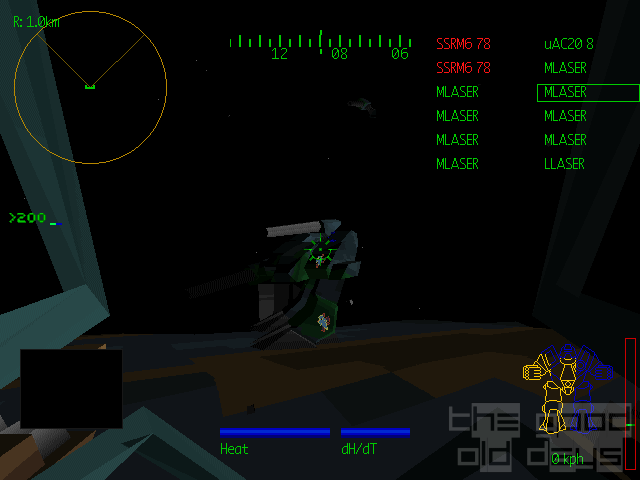 One false step and you'll be lost in space… forever

This is all nice, but in all honestly, these duels even detract from the overall appreciation. There are two playable sides, each campaign consisting of just 16 missions – effectively just 12, though, as four are just head-to-head duels. Not a whole lot, they were probably already planning to sell expansion packs there, which did arrive first with Ghost Bear's Legacy. This introduced new levels, some quite imaginative, such as defending a flying spaceship while standing on top of it or an underwater Mech battle. Then came NetMech (introducing multiplayer) and finally Mercenaries. The latter was actually a standalone game, released under the MechWarrior 2 banner for licencing reasons, and although based on the same technical foundation, fundamentally changed the basic game structure in ways which deserve their dedicated recognition.

Between all those variants, versions and bundles, where does this leave the original MechWarrior 2 today? Graphics maybe aside, it has aged surprisingly well. Headphones on, hands on the keyboard, joystick or mouse, immersion still works beautifully. The scope of the game is rather limited, both with respect to the number of missions and what it actually simulates. That core simulation, however, wasn't just a giant step forward compared to the predecessor and also leaps and bounds ahead of the contemporary competition, but it has stood the test of time. Though a word of warning: each incarnation of the game got subsequently harder. So even if you may believe the final one, Mercenaries, with its more interesting scenario and most advanced system, should be the one to go to, starting with the original one may be advisable anyway – even if only as a training ground. 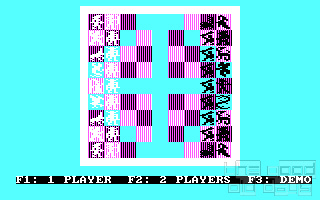