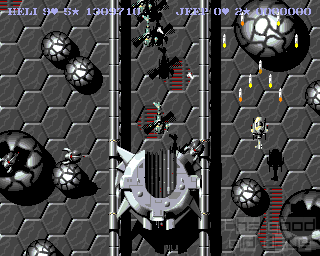 After converting the arcade hit Silkworm to home systems, developer Random Access re-imagined the shooter with the original creation SWIV. Now scrolling vertically, a helicopter and a jeep once again go shooting their way through loads of enemies. Some of which seem vaguely familiar. 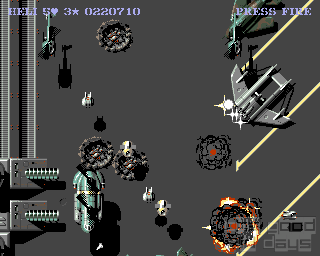 In gameplay terms, if offers the expected. Enemies of various types approach in different formations, each having their unique behaviour pattern. Conveniently, enemies drop shadows even before they actually enter the screen, giving a second of advance notice. This can be a lifesaver! Ground-locked and airborne targets have about equal share. A number of the Silkworm enemies have return performances, such as the larger aircraft assembling itself mid-air exposing only one weak spot in its armour occasionally.

Same for the shield/smartbomb hybrid which can be collected (to achieve the former effect) or destroyed (to trigger the latter). Apart from that, there are unfortunately only very few extras to be found. The default shot frequency can be slightly increased or the cannon spread can be widened – that's it.

With respects to the choice of player vehicles, the switch of graphical perspective makes quite a significant difference. The overhead view allows for the same freedom of movement for both the helicopter and the jeep, giving them equal chances and doing away with the jump'n'run silliness of the ground vehicle. Equal chances, without making them the same. The jeep for sure has to take more care to avoid obstacles, but its rotatable cannon makes up for that. Not relevant in gameplay terms, but nevertheless nice: the jeep driver automatically jumps into a speedboat in appropriate level sections.

Without a doubt SWIV offers an arcade perfect experience on a home system which was unheard of at the time. Unfortunately, arcade standards have also been applied to the difficulty level. Although enemies don't generally zip across the screen, their sheer numbers (plus their bullets) make finding a semi-safe spot to move to often close to impossible. Though at least it never fully crosses that line of impossibility. The shoot 'em up genre surely never was one for newcomers.

danby:
Always been an absolutely favourite of mine. Plays well on just about any platform it came out in
[Reply] 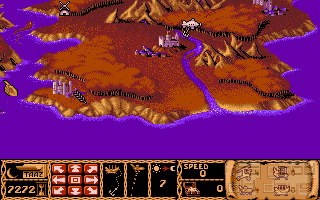