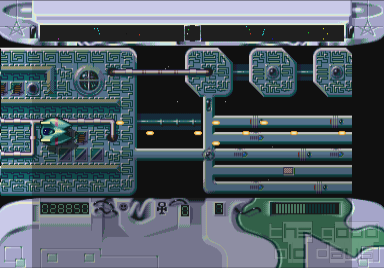 An inexpressively interchangeable title. Probably the worst box art in the history of video games. A laughable excuse for a plot. With such face values, this is a game truly deserving the overused hidden gem status.

Steel Machine is a take on the C64 classic Uridium. That being one of the best shooters ever made, there are worse ones to take inspiration from. Flying a highly agile space fighter (the badly named titular craft), the player seeks to destroy six large battle cruisers threatening his home planet. In true Star Wars style (and because there would be no game otherwise, obviously), these cruisers have a design weakness. The engineers chose to mount the main reactor on the outside of the hull! This goes right into the book of bad design decisions in science fiction. Anyway, to blow it up, its protective force field first needs to be deactivated by destroying several “power stations” (also accessible from the outside). 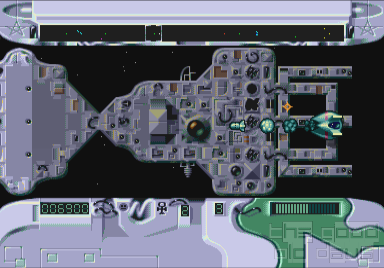 Apart from being protected by an endless amount of smaller enemies, the catch is that both the power stations and the reactor will not even be scratched by the Steel Machine's regular bullets. Special missiles are needed which… you forgot to stack up on before launch. Luckily, they are among the drops of destroyed enemies, along with regular bullet upgrades, shield energy, extra lives etc.

This is where a gameplay defining design decision comes into play. On the regular way from level start to finish, there will not nearly be sufficient missiles to be picked up. Meaning the player will have to zip back and forth over the cruiser a lot. Or, alternatively, start camping at a hangar hatch where enemy fighters will be released in order to destroy them before they can even become dangerous.

Whether by intention or not, this distinguishes Steel Machine quite a bit from the zippy Uridium. Ironically, this game suddenly feels a lot more like another Andrew Braybrook creation – the much lesser known Morpheus, a slow-burning shooter with careful movement, fairly free navigation and collection of resources for major ship upgrades. 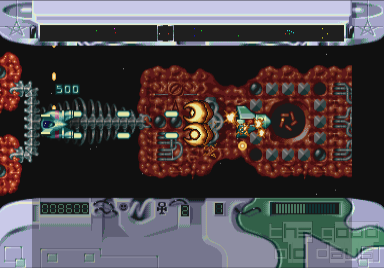 Which would be quite alright, as the game can be played either way in principle and technology allows for it. Control of the ship's speed is very exact, up to super smooth high velocity. Vertical movement is flawless as well. Though then, one major restriction in freedom of movement limits player options and increases difficulty immensely. The Steel Machine cannot move horizontally across the screen. It has to stay on one of the sides. Those typical technical issues of the CD-i showing their ugly head again…

Meaning not only are the ways to evade enemies and other obstacles clearly limited (making enemies approaching from behind particularly dangerous, as the only way to spot them in time is on the handy level map). When turning the ship around, this triggers an animation equally impressive as in the original game. Though where there, the player had a lot of control over this maneuver, here, she will be propelled all the way across the screen. Any obstacle present there spells instant destruction. Turning triggered the same way as slowing down, it unfortunately even happens inadvertently in the worst moments imaginable.

While this mostly takes getting used to, it does make for some severely unfair situations. The most glaring one being the right-hand side end of the level, just in front of the main reactor: arriving there with the force field still active, there simply isn't any way to turn around again without losing a life. As soon as you see it, it is already too late. 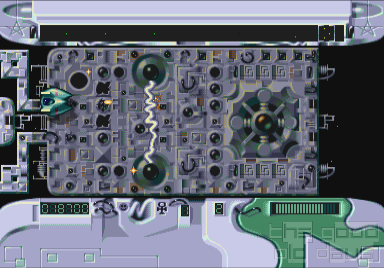 Reactor in sight… but when you see it, you're dead

The level design suggests that the makers were fully aware of this. There is no attempt to mitigate this issue. Rather, it appears that the designers took devilish delight in putting indestructible obstacles right where players would typically have the need to turn (for instance right behind a hangar hatch or a power station). In level 3, the difficulty jumps to almost insane levels, with no safe spots to be found anymore.

Though then, even the original Uridium was tough as nails. After suffering through level 3, the following ones are hard, but feasible. Steel Machine does have a number of differently behaving enemies which, once you figure out their patterns, can be disposed of quite efficiently. The visual designs of the levels are rather great as well. The expected metallic look of the first two levels gives way to a techno-organic nightmare in the subsequent two. Compared to that standard, a semi-letdown awaits for the final two levels which look suspiciously like the first ones with only a slight change of colour palette (maybe they considered nobody will ever get that far). 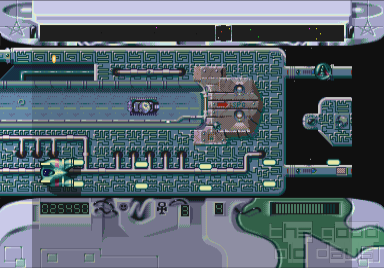 Music is streamed directly from the CD, and the five industrial techno tracks are excellent! In typical CD-i fashion (technical weakness #2), the player has to choose between either music and sound effects. The latter being completely generic, it makes sense that activated music is the default setting. Given the amount of repetition needed to beat a level, there is a certain danger of being sick of hearing “Shrivelled” and “Is she dead?” at some point

Of course, later the same year, Graftgold would release Uridium 2. Clearly a better update to the original in all respects compared to this one. Though Uridium 2 remained confined to the Amiga platform and anyway, out of Braybrook's own creations, Steel Machine may very well be the best of the clones. In spite of some frustrating moments, it remains immensely motivating – even after dozens of deaths, it beckons to try “just once more”.

[At the time of writing, there were some minor emulation issues in MAME. The left-hand part of the screen shows some of the level graphics, although it should be black. Depending on player movement, the overall graphics will slightly lighten or darken. Those issues are visible on the screenshots and on the video, but they do not affect playability.] 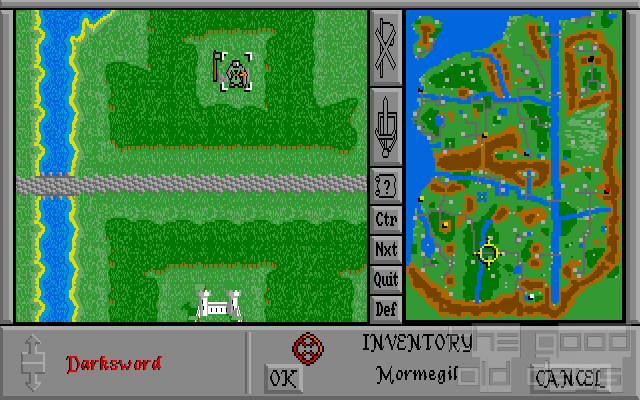