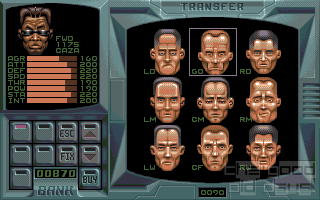 Brutal Deluxe – the very game which catapulted the already acclaimed Bitmap Brothers to legendary superstar status. The one game everybody remembers, the one game which keeps coming back in different editions. Though then, cross your heart, when did you actually last play it? This many years? That's a pity, because boy, is it still great!

Picking it up from the original Speedball, this sequel not only extends the scope, but it enhances playability by a degree that this will certainly not turn into a “if you liked the original, give it a try” review. 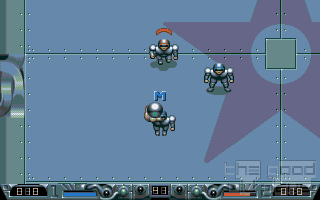 The combination of a much larger playfield and a closer camera perspective makes for an interesting new feeling. Although explicit overview is not excellent (also due to lack of a genre standard radar), artificial intelligence teammates behave in predictable and smart patterns. Quite elaborate, fluent play maneuvers can be pulled off with some experience.

With that knowledge, it is almost a pity how effective just running over the opponents becomes after some time. This can be achieved either by upgrading the existing players or buying stars from the transfer market. Given an advantage in player stats, violently breaking through defenses becomes the easiest way to score. 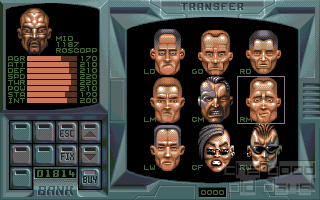 Fu Man Chu would make a great addition to our team!

In that respect, the graphics artists have essentially made the choice for the players. Buying from the transfer market is made attractive due to the interesting faces associated, replacing the rather plain guys initially found in the team. This intuitively encourages good business choices, as indeed it is also the financially more attractive strategy than upgrading.

The playing fields themselves now have static placement of all elements, but they have gained as well nevertheless. There are several places to score apart from the goals, and a score multiplier can make or break a match. As the latter is placed in a location not on the direct trajectory towards the goal, it makes for interesting decisionmaking during the short, but sweet matches (90 seconds!) what to spend those valuable time on. 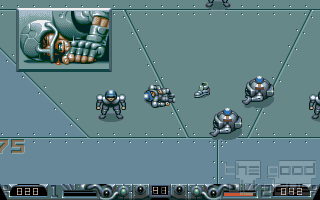 Trailing behind on score, one player down

As in the predecessor, although winning is key to success, it is finally shallow unless randomly appearing money is also collected during the matches. Without capital to invest, the following matches will not end well. Apart from money, various power-ups also appear on the playfield for temporary boosts.

In the upper league (of two), computer teams are at the right level to still provide a challenge without being unbeatable. Though of course, the real party only starts with two human opponents. This is a multiplayer game at heart and tactics like intentionally injuring the opponent's players (for points!) only really start making sense in such a setup. 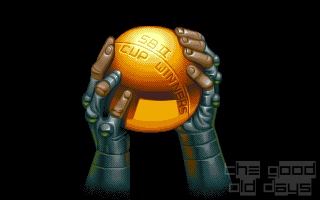 You see, there is little to fault the game with. It plays beautifully, looks great both on still pictures (those artists really knew how to put the players into cool looking poses) and in motion… feeling obliged to split hairs now, the sprites during the matches could use some more individuality. Also, the sound which is a bit of a letdown. Sure, the title tune is great, and the ice cream vendor shouting on the ranks is a classic, but apart from that, effects during the matches have a bit of a stock library feel to them. There isn't even any music anymore during the matches! Second, when the game was “upgraded” to AGA some years later, they left it to the same colourblind guy who messed up The Chaos Engine in lollipop colours already.

The latter doesn't take away from the original version and the former, while regrettable, doesn't seriously detract from the enjoyment. Speedball 2 is fast paced, easy to learn, challenging, almost flawlessly produced and most importantly eminently playable. Not only the best sports game of its generation, but its qualities have endured the test of time!

Festy:
One of the greatest computer games ever. I played this for hours on end.
Mr Creosote:
Feel free to share anything about Speedball 2 (1990) here!
[Reply] 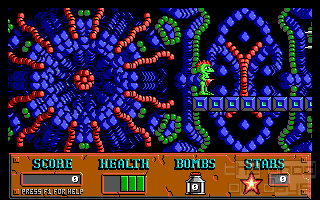