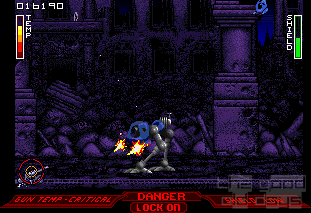 Probably the least likely Mech game, Walker is a horizontal shooter featuring a giant robot stomping from right to left (!) through four different settings. Obviously, they all have a war going on. Different parts of the world, different historical and future epochs, but mankind will always be fighting. Reality is depressing, isn't it? 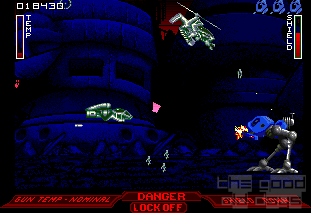 Anyway, this game is supposed to be all fun, isn't it? With stylishly garbled radio communication in the background, the joystick or keyboard controls the Walker itself. Its speciality is the rather free aim of its head-mounted cannon. Using the mouse, the player can point it anywhere on the screen as long as it is in front of the sprite. Movement limited to one dimension is therefore balanced out by two-dimensional aim.

This makes the game rather special in the shooter genre. Whereas usually, it's mostly about getting through the bullet hell, here the key to win is wasting enemies before they shoot too much in the first place. The Walker isn't nearly as fragile as your typical shooter vehicle, it can take quite a bit of damage. 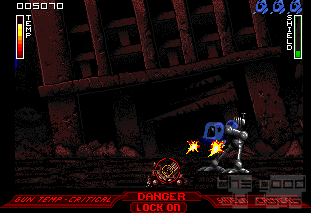 Of course, a Mech game just has to feature heat management. When not temporarily disabled through that, the enemies are delightfully underpowered compared to the player robot, but make up for it in quantity. My personal favourite being the soldiers which try climbing the Walker and plant explosives on it.

They, however, also illustrate the game's broad shortcomings. The animation as the tiny figures climb up their rope and them swinging helplessly as the robot moves fast is superb, as is the robot model and its animation in general. Though there is hardly a good way to actually shake them again. The best is just to delay taking damage.

This is not the only glaringly missing gameplay mechanic. The completely obvious option of simply walking over the soldiers just doesn't exist. It can't have been moral qualms, either, as shooting the parachutes and letting those poor enemies fall to their death is possible and encouraged. 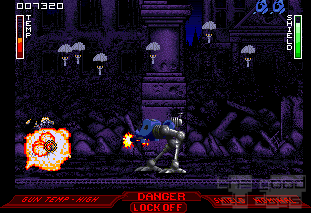 Speaking of omissions, the game features absolutely no power-ups and no different weapons. Background graphics are weirdly dark and featureless. The main visual exchanged per level is just the colours. Enemy sprites subjectively seem to have received less care in later levels, actually, looking a little bit weird towards the end.

Absolutely endless loading times when played from floppies just complete the picture of this being more of a proof of concept than an actually finished game. What is there doesn't play too badly. Yet, it gets repetitive and samey all too soon. Neither does Walker allow for any variety in what the player can do, nor do levels or enemies exhibit anything surprising, ever. In this case, an enhanced re-imagining built on the same foundation may actually make sense. 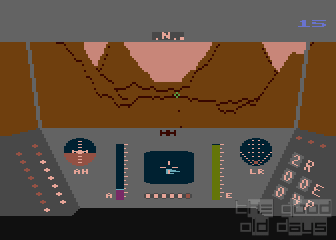