The Daedalus Encounter
for 3DO 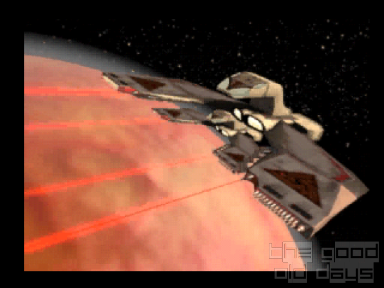 Critical Path was an early entry into the “interactive movie” genre and actually one of the more successful ones. It did have its user watch the protagonist do a lot of things for a lot of the time, but also did allow for some interaction, and it gave a valid reason for the player's impact on what's going on being limited. The Daedalus Encounter, although not a sequel, continued this same idea.

It's the future™. Two astronauts, dismissed from the military after the end of the war, are trying to make a living salvaging material and items from space. No, wait, three astronauts. Just that one of them is just a human brain inside a metal shell, connected to electric circuits. There was an explosion some months ago, you know. This role, of course, falls on the player. While Ari (Tia Carrere, known from Wayne's World, True Lies and later Relic Hunter) and Zack (Christian Bocher, known from nothing), the remaining two human crew members play out their usual “constantly bickering, but maybe in love” routine. 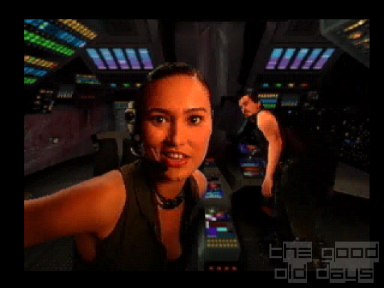 I've seen your face before

Anyway, their latest mission takes them to a border region where really, they shouldn't be. Predictably, something bad happens. Their small ship crashes into a huge object which seems to be a space ship as well. Just of unknown, alien origin. Damage is considerable, no way to take off anymore. Time to explore!

The game does a good job of introducing the player to what they can actually do. Mostly, this is controlling a drone which has few features (apart from moving). It can obviously watch, it can record things, play back recordings, send differently coloured light, grab things, and that's about it. The game demonstrates these mechanics as well as its controls without it feeling too much like an artificial tutorial.

Then, when the real exploration of the alien ship begins, things don't become all that different, however. For about three quarters of the game, Ari and Zack take the lead. They decide where to go and occasionally ask the player to perform some task for them. Although, honestly, minutes of passive watching can pass between two such occasions sometimes. The endgame then actually frees the player of such constraints. Finally, it's time for free exploration, even if it is just revisiting previously seen locations to look for things missed the first time around. 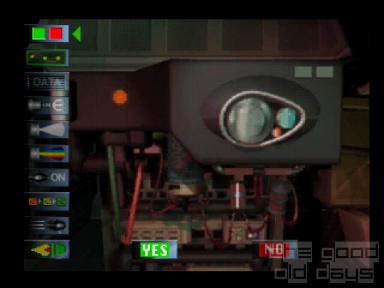 While the latter may seem like a much nicer thing, as it does allow for player initiative, the previous phase also does have its merits. Sticking close to the two human protagonists and the script defining what shall happen next does ensure that the player is always in the centre of action. We all know how it goes in more classic adventure games, don't we? Sure, those situations where you finally solve something, find something, make something happen are great. But most of the play time is actually spent just looking for those triggers.

Therefore, what we have here is a game which puts its focus on tightly scripted progress, on showing action rather than letting the player figure the broad strokes out by themselves. Involving them in the small steps.

This involvement often consists of finding hidden objects within a tightly limited space or solving puzzles often revolving around colours and shapes in order to open doors. Different from certain other games, those puzzles are at least original creations. Nevertheless, this is of course a lazy route in game design, as it does not require puzzles to be truly embedded into the narrative. 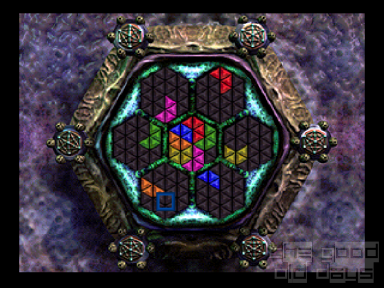 Going on a tangent, the similarity of these puzzles with what The Dig offered half a year later is striking. Mechadeus, developer of Daedalus Encouter, is also credited for providing 3D renders for The Dig. Think about it. Two games about exploring lifeless, alien places. Both alien cultures being based around encoding information in simple shapes and colours. Given the latter game's notoriously long history of delays, it begs the question who copied whom there.

With puzzles therefore being mediocre at best, the question of storytelling quality remains. The highly artificial look of the three-dimensionally rendered surroundings, this technology being in its infancy at the time, works in the game's favour. Even when first approaching the alien ship, the protagonists remark that it must be built from materials completely unknown to humanity. Therefore, it makes perfect sense that walls, the ground and essentially everything looks completely strange. The design is nevertheless not too bad. There are enough visual hints towards the function of objects without being straight copies of human equivalents. Colours and (rare) animations are used with care.

The alien ship being the game's highlight, the plot, on the other hand, doesn't offer a lot. The motif of exploring an alien spaceship where everyone is dead is one of the classics of the genre. Here, there is no mystery to be solved, however. The crew has been ambushed by space piranhas, as both the protagonists and the player learn very early on. The only objective which remains is therefore to find a way to activate the ship again in order to escape the sticky situation. 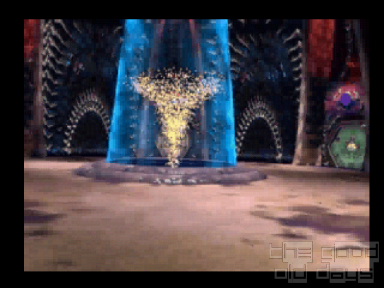 The one strong moment, both in storytelling and gameplay terms, only comes at the very end. The very last scene has the protagonists finally enter the ship's command central. To everyone's surprise, there is actually still one alien alive. Things are bound for a confrontation involving fangs and blasters, which indeed is one way to go at it. The other option being to apply the basic knowledge of the alien language the player could have gained in the game so far.

While still not amazing in gameplay terms (“click the right tiny spot on the screen in exactly the right moment while a render movie runs”), this suddenly opens several axes of giving meaning at once. Meaning to all those preceding scenes and puzzles. Meaning with respect to the characters. It almost turns into genre commentary.

Is the way to get there worth it? Well, it's not a particularly rocky path. The game is not long and the two people on screen bickering and failing keeps it entertaining enough. Full screen videos, showing off the 3DO's then impressive capabilities, look decent. Even if for sure, a higher colour depth would have been possible. It's certainly not a must play. Far from it. But it's also not time completely wasted. Especially within the boundaries of the “interactive movie” genre.

Mr Creosote:
Feel free to share anything about The Daedalus Encounter here!
[Reply] 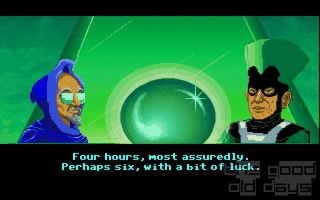