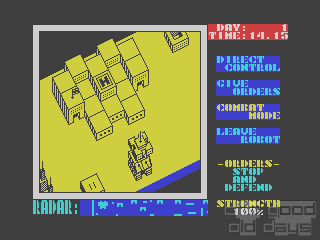 Real-time strategies are one of the most popular genres these days, thanks to the addictive combination of resource gathering, unit building and tactical combat. However, very few people know that the beginnings of RTS gaming lie with the Spectrum. You may have heard of Herzog Zwei, a Sega Genesis game, which all Dune 2 bashers use with great pleasure to point out that the “first” RTS was not Dune 2. Herzog Zwei hit the shelves in 1989, three years before Dune 2. However, what most people don't know is that the first true RTS game came two years earlier, in 1987, on Spectrum. Its name was Nether Earth (a quick note: The Ancient Art of War by the Murry brothers was released in 1984, but while it featured real-time tactical combat, it lacked all the other aspects of RTS gaming).

Nether Earth was hailed as the beginning of a brand new era in strategy gaming, and rightfully so. However, as America was named after Amerigo Vespucci and not Columbus, this game shared the same fate and was forgotten. That is until Z was released a few years ago, which resurrected the concept, if not the memory of this great game. In case you were wondering, the concept is simple: produce robots to occupy more factories, which in turn enables you to produce more deadly robots, which you use to defeat the enemy.

The playing field was very narrow yet very long, designed to enable to relatively stupid robots to always go in the general direction of the enemy. You started on the western end, while the enemy started in the east, each of you with the main war factory, which produced a single “general” resource. You moved in a small hovercraft. Landing in the war factory enabled you to access the building menu; here you designed the robots. Your first robots were relatively slow - bi-pedal with a short-range cannon to defend themselves. Once they rolled out of the factory, they switched to a stand-and-defend mode. When you landed on their head with your hovercraft, you could issue them orders, which were complex enough to beat even such games as Dune 2 all those years later. The orders ranged from guard duty to search-and-destroy, which the robots were quite capable of doing themselves. However, your first robots had a different task: occupy neutral factories. There were plenty of them on the route to the enemy, and you needed lots of them. There were an unprecedented seven types of resources, and you needed every single of them to create the best possible robots: fast-moving antigrav robots with a nuclear explosive, guided missiles and lasers.

It took about a week into the game to run out of neutral factories, and that's when the fun really started. The game was incredibly fast and merciless; the enemy was always faster and better equipped, and you spent a frantic five minutes just trying to slow down his attack, while producing as many robots as possible. However, the enemy was not too hard, and with a little effort you prevailed and started to push back. After a month of intense fighting you sent one more kamikaze robot into the enemy's headquarters and the game was over. You prevailed once again.

Maybe it was an accident, and maybe it was pure genius, but this game had one of the best mechanics ever designed for any platform. The designer acknowledged the low A.I. of the units, so he designed the playing field as long and narrow, in order to minimize the robots' confusion. The enemy was just strong enough to pose a serious challenge, but not impossible to beat. The obstacles on the playing field enabled you to use a half a dozen of different strategies to defeat the enemy, which greatly enhanced the replay value. The interface, while cumbersome, had one huge advantage: the farther you progressed the longer it took you to fly to the front lines and issue new orders. This real-life problem was never replicated this well again.

Nether Earth was never the game you'd associate Spectrum with. It appealed to a relatively small audience and never was commercially successful enough to be ported to any other platform. Yet, this game should serve not only as the birthplace of real-time strategy games, but also as a case study of what makes a gameplay great.

Kaminari:
I've long believed that the first Herzog on the MSX was the real godfather of the RTS genre, but now I've realized that it was actually a total rip-off of Nether Earth. Long live the Speccy!
Darryl:

I have searched and searched for this game, all because I remembered it as being called 'Cursed Earth'.

This game rules, its never been beaten yet!