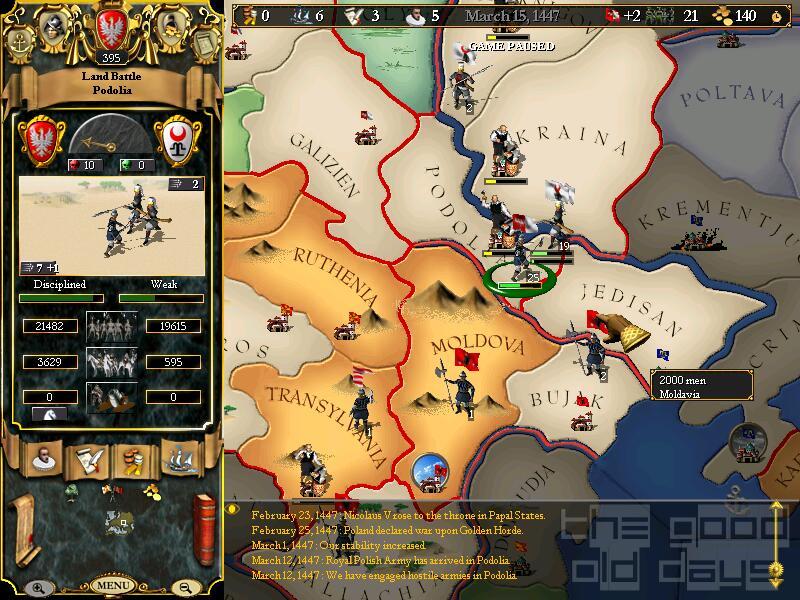 It was around the turn of the millennium. Not a good time for computer games. The market consolidation on hardware side (IBM PC + Playstation + Nintendo 64) had also left its strong marks on the variety of software. For years, few game formulas had been ruling the market. Console-style racing games (with the camera behind the car) were going strong. The predominant computer game genres were 3D shooters and so-called real-time strategy. Adventure games were dead as a doornail, what would become the big RPG renaissance was actually just starting to bloom (though nobody suspected it yet) and apart from that… yet, a bit fat nothing. And that's just covering the standard, previously established niches. Experimentation, low-price or indie games were all non-existent. It was an awful age of uniformity. Not quite incidentally, it was the time I launched this website – to show there had been so much more in the gaming sector once. Based on a personal recommendation, I bought the totally atypical Europa Universalis and later its sequel, Europa Universalis II.

Let's start with an easy answer to an obvious question first. Why am I reviewing Europa Universalis 2 instead of keeping proper order and starting with the first? In fact, these two games are very similar. The second one not only looks almost identical to the first, it plays so closely similar that it has replaced the first in my play schedule completely. By now I would be hard pressed to even tell you about the detailed differences (few nations relegated to “natives” status and the addition of a multi-dimensional political system are among the changes) and I do not really see the point of re-immersing myself into such a complex game as the first Europa Universalis just for the sake of historical documentation. My claim is: the second game surpasses the first in every respect, even if not by a huge margin. Today, it can be considered an unsubstantiated claim, but 15-20 years ago, there must have been a reason I retired Europa Universalis in favour of its sequel. 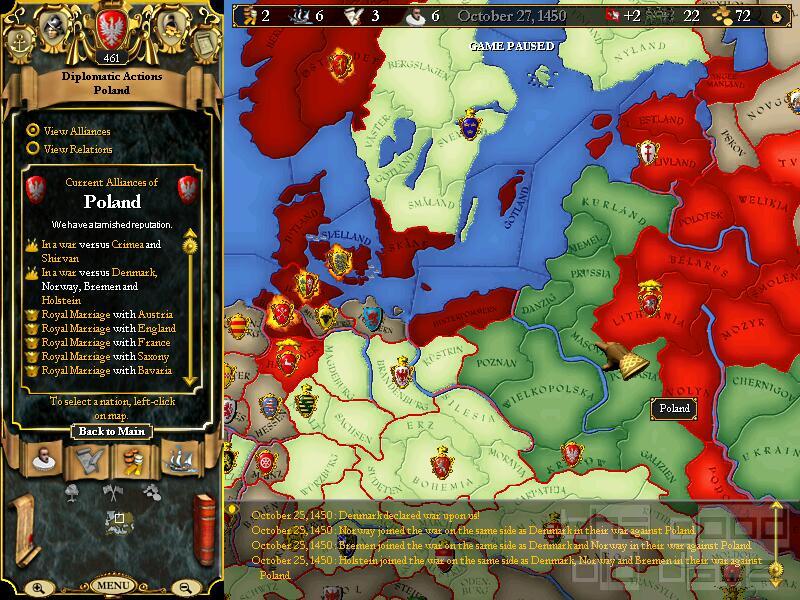 In case you haven't played either game, imagine Risk, the board game. EU is actually a board game as well, released in the early 1990s. Imagine the large countries of Risk further separated into much smaller sectors so that the world consists of hundreds. Further imagine there aren't just a handful of players, but as many as there were semi-organized nations between 1419 and 1819 (not just European major powers). Imagine the simplistic battle system replaced with one based on a number of additional factors (troop morale, unit types, technology level, government model, terrain, season and war exhaustion to name a few), which, to make matters even more complex, are counter-dependent and interconnected. Finally, imagine that the building of new armies is not just a question of one-dimensional income versus costs plus some lucky card draws, but that built on a broad set of player decisions and events shaping each country politically, economically, religiously etc.

With that, we're still far from grasping the vast array of what Europa Universalis 2 offers (and expects), not having mentioned the complex web of country relations, diplomatic moves ranging from mutually beneficial treaties such as military alliances or trade agreements to diplomatic subjugation in various stages, or – speaking of trade – the system of each sector producing specific trade goods which provide direct income to its owner, but also contribute to special centres of trade, world exploration, colonization and many more things.

Overall, this leads to an unheard of decision space and therefore freedom for the player. Even if the eventual goal is simply to build a nation as powerful as possible, the path there is widely open in principle. Will you go for eating away at the land of less powerful neighbours, expanding step by step or in a large, decisive sweep? Will you invest in naval superiority, build up a major trade empire and become rich this way? Will you take advantage of the internal issues of a neighbouring country, trying to incorporate their rebels into your own state? Knowing that in a real game, such strategies will not be applied mutually exclusively over the span of 400 years, but to varying degrees alongside each other. 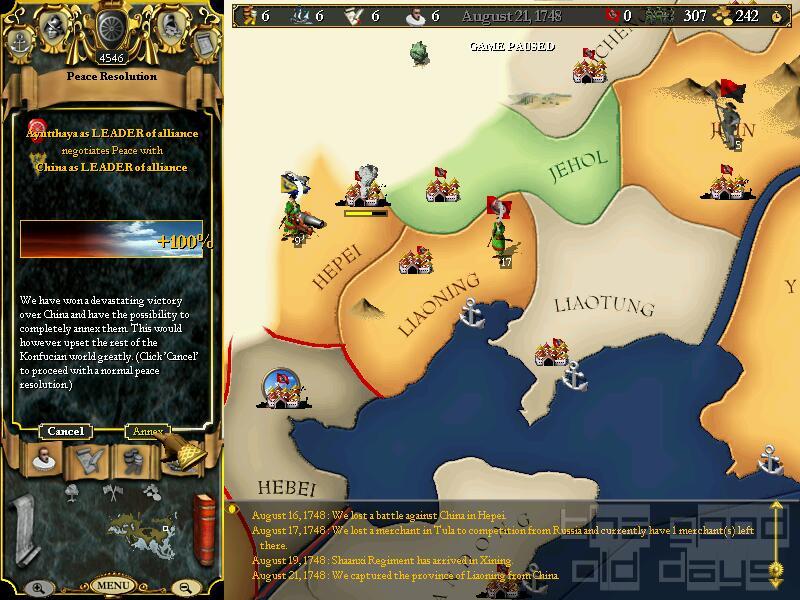 Though, and this is where the game really shines, the player is tasked with a series of always meaningful long-term and short-term decisions throughout, and keeping the two in line, balancing them, is the real secret of playing successfully. Sure, Venice with its merchants all around the initially known world could also intervene in a land-based war on the European continent if needed, and it may even be successful, though keeping this an exception by opportunity may be the better strategy long-term. Although on the other hand, the game allows the freedom to just use medieval Venice's initial wealth as a launching pad to actually turn it into a land-focussed nation over time, and then, all these considerations will of course be different and it may try to rival the Austrian and Ottoman empires on the balkans. Or how about preventing the Byzantine empire's demise, defending it against the Ottomans, and then founding Byzantine colonies in America? Well, you can also play it straight, of course, and go where the historical flow takes your nation.

Speaking of historical flow, this is where events come in. Apart from random ones, there are a scripted ones based on actual historical events or spun out from actual historical events (but adapted to the world state in the game at the time). These more or less gently push players into a specific direction, such as when playing England, they will receive a lot of explorers and colonists all of sudden. They may also just give them something to do, such as when a civil war breaks out, basically disabling any further external initiative in favour of holding together what you thought you already have.

All this adds some spice to the game, though there is also a downside. On subsequent playthroughs, players will already have specific major events in mind that will likely adapt their play style accordingly. To keep with the example: if you know that a civil war will break out soon, you will very likely try to avoid getting caught up in another external conflict just before. This precognition, however, actually spoils some of the fun of actually adapting one's plan fluidly on the go. 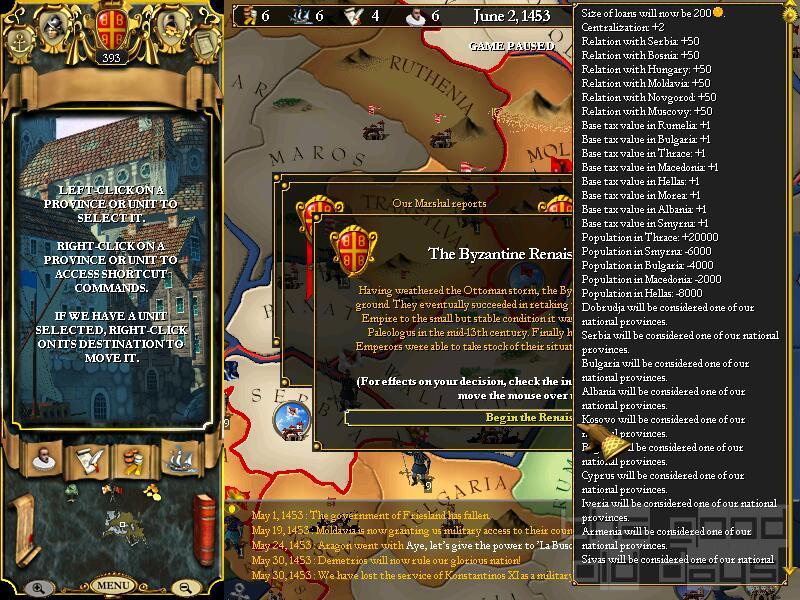 Fewer events are defined for nations less likely to be played (though there are mods of the game, especially the excellent AGCEEP). Although the game suggests obvious picks, such as England, the Ottoman Empire, Spain or Poland, nothing technically stops you to play as Ayutthaya (see screenshots), a small east Asian nation, predecessor of the modern Thai state.

Obviously higher level of challenge aside, this is interesting as in the absence of sweeping scripted events, the simulation aspect of Europa Universalis 2 can be observed and appreciated in such a game in much purer ways. The way each country, no matter how small, is part of the game as an actor, not just a victim waiting to be conquered. The AI not receiving major visible advantages, but rather taking decisions based on information as a human player would have it and influenced by a “personality” pre-defined per country. Given overall complexity of the decision space, an admirable achievement!

Additionally, from player perspective, the game's main achievement may be, however, how successfully it does address the eternal problem of the grand strategy genre how to stop powerful nations from becoming unstoppable. Consider Civilization, as the forefather of the modern-day interpretation of this genre. Essentially, once a nation has control over a good portion of the world, there is no stopping it anymore. The rules lead to an avalanche effect: successfully conquering cities, production capacity increases to build an even stronger military to conquer more and more and more. Civilization makes a half-hearted attempt to address this through its corruption mechanic, but this isn't nearly strong enough and all too easily solved to really turn into a major disadvantage. Only part 4 of that series, released five years after Europa Universalis took effective steps against the all too efficient expansion explosion strategies, and even then, it was basically nothing but an artificial slow-down. 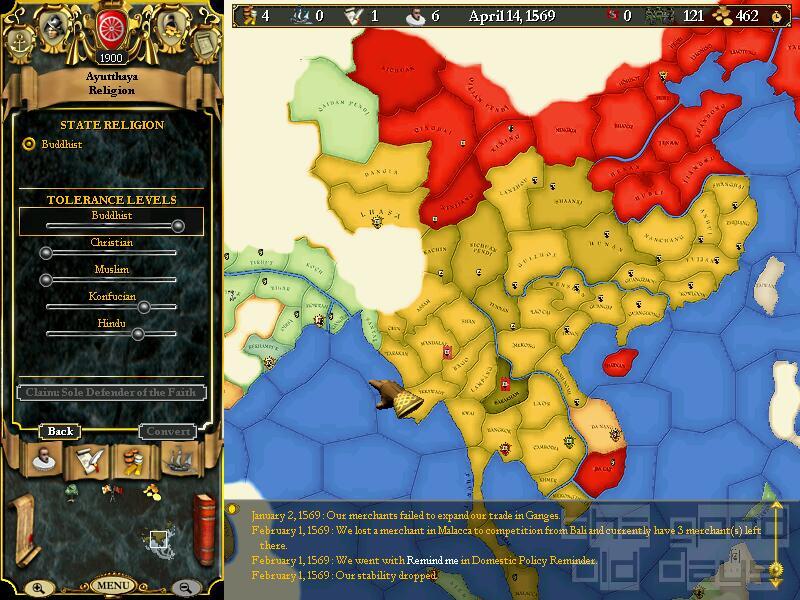 Don't want Christians or Muslims in our state

Europa Universalis 2, on the other hand, builds an interwoven system of region culture and religion versus those of the overall state, influence of state organisation and overall stability, the current monarch's personal abilities, war exhaustion etc., which makes it increasingly harder for large countries to further expand. Not just that, but it becomes increasingly harder to maintain control over the already existing large empire as well. One could almost think someone took a look at the factors which brought any historical empire down at a point and modeled this after reality. What brought the Austrian Empire down? Rising nationalism of the different groups of this multi-ethnic state. How did Great Britain lose its American colonies? One major factor, for sure, was that the people there stopped considering themselves “British”, but developed their own identity, their own culture. Notions which can be found right here in this game.

Taming this complexity, moulding it into a manageable playing experience, must seem like a daunting task. Even among die-hard wargaming fans, the underlying board game is notorious for its large amount of busywork. Looking up current rules, depending on age and country, rolling a humongous amount of dice to determine the outcome of semi-random events, bookkeeping on dozens of tables and pages etc. easily made a single turn take several hours. The computer taking all this over for you, the relation within play time between mechanical labour and interesting decision-making is much more advantageous.

This is not just due to the the ability of the computer keeping records and performing calculations for you, but also due to the very smooth interface. A few minor instances where maybe looking up specific province information takes one click too many, where the same information could maybe have been included right on the map itself, aside – it all flows very well and quite intuitively.

At this point, we may be asking ourselves whether Europa Universalis II is the perfect game. Honestly, it is close. The one thing I keep dreaming of is the option to start a game at any historical point, in order to enable playing even countries which only appeared later, or which may have been gone already in the real world on the starting points of later scenarios. Though there, we are really talking about an optimization within the last 1%.

It is a game of interesting, meaningful decisionmaking all the way through. Of keeping balance between long-term strategic planning versus short-term needs and adaptation due to unforeseen events. Whether you want to play such a complexity monster on such an epic scale is one question. Though as soon as you answer this question with a resounding yes, there should be nothing stopping you. Great that such games still existed at the turn of the millennium! 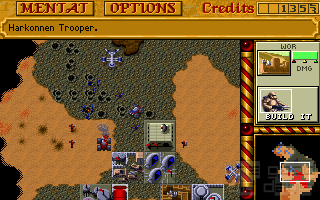