Wing Commander II: Vengeance of the Kilrathi
for PC (DOS) 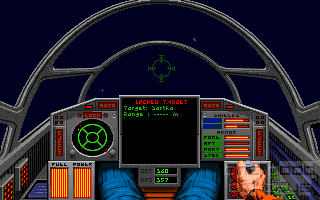 Hardly one year passed between the first Wing Commander and its sequel. In spite of two mission packs having come out in between. Someone was really striking the iron while it was hot there. Vengeance of the Kilrathi is indeed exactly what this short timeframe suggests: a tweaked version of the original. Though one could say: it is what the original should have been in the first place.

Before diving into the key new material this installment offers, let's get one thing out of the way. Indeed, there has been one major technical improvement. The original's rather choppy framerate has been vastly improved. Movement of the player's ship and the other vessels in space is much smoother. Well, today, it is. Back then, hardly anyone had a machine at home powerful enough to take advantage. These days, or even for those few rich kids thirty years ago, it was/is a great improvement to playability. 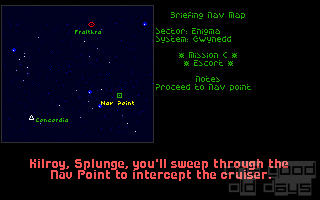 On the gameplay side, it offers the already well-known mixture of missions involving scouting, dogfights, assaults against capital ships, escorts and reconnaissance. The wingmen roster is quite comparable to the first part, with their behaviour patterns differing in few key aspects, which makes collaboration with them more interesting. Though there is still no way to actually take any influence on whom to go on which mission with.

All that said, the one thing where Origin really invested is the plot. Although highly fuzzy in many minds, Vengeance of the Kilrathi is actually the game which defined the formula which the rest of the mainline series followed. The one which started what the series is remembered for. No, not blasting ships in space, but being a big soap opera.

The opener is a strong one: we witness the Tiger Claw, the very carrier which had been the player's home throughout all the first game, being destroyed by advanced stealth fighters like it is nothing. An immediate emotional hook which works beautifully. Cut to Kilrah for an exchange between the Kilrathi emperor and a prince which, on the other hand, can be described as awkward at best. We are apparently to believe that Wombat “Splunge” Gumby, protagonist of the first game, has left a deep impression with the enemy's royalty who consider him the only real threat to their otherwise inevitable victory in this war. Bit of an overestimation of the player's role there. 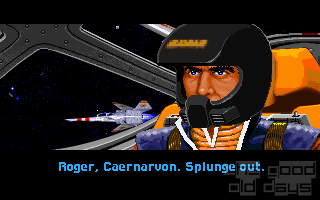 In any case, Splunge is demoted and sent for duty on a remote space station where nothing ever happens. Nothing ever, until 10 years later, a major carrier of the human fleet actually jumps there, having taken major damage in a battle and still being pursued. Doesn't take long for Splunge to join this ship's ranks again, where he then also meets a number of Tiger Claw veterans.

What unfolds from there is a big construct of primetime soap conflicts and themes playing out between the people on board. Some still don't trust the protagonist due to the events from ten years ago which he was officially blamed for. Kilrathi defector Hobbes, introduced in the mission disk of the first game, is not exactly liked by all, either. One crewmember is actually being blackmailed by the enemy. Somebody repeatedly sabotages flight recorders in order to hide evidence of the stealth fighters' existence. A bizarre murder occurs. The protagonist gets romantically involved with a female crewmember, which leads to further jealousy with certain rivals. Wait, isn't this his commanding officer? The ethical dilemma of that is not addressed by the narrative. Anyway, all the while, almost taking the backseat, the war just goes on.

The writing on those parts remains a little bit uneven throughout, but not as badly as expected from the opening. The bulk of scenes work, taking the gruff brevity of the verbal interactions between cliché military types for granted. Extrovert emotions such as envy, distrust, contempt, jealousy or hate come across well enough. When it comes to more subtle, delicate interactions, such as love, are handled in such clumsy ways that things turn cringeworthy, of course. 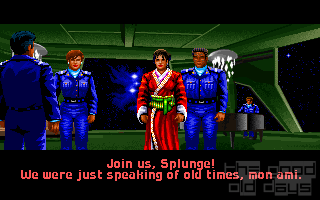 She just wants to stress she is Belgian

What does not help in many regards in that storytelling exclusively relies on people in uniforms standing stiffly in the same pose, not moving a muscle, while delivering lines of dialogue. There are absolutely no fluidity or variety in the staging. No visual storytelling. Nevertheless, the most important dramatic notes hit in the right places, when a friend's tragic fate is sealed, the traitor is finally (unimaginatively, but highly satisfyingly) revealed etc.

The inclusion of a strongly-written plotline comes at some heavy price, however. Much of the campaign flexibility is gone. There is exactly one branching point left to continue on a winning “perfectly” or “winning barely” streak. Wingmen cannot die in combat; at worst, they eject and return to the carrier. Unless, of course, the script demands them to die at particularly climactic plot points, in which case the player is powerless to prevent their death.

It is therefore not just the cutscenes themselves which are non-interactive. Some missions also take pre-scripted turns, taking the player's hands off the ship controls and letting things unfold in a way producer Chris Roberts intended to. This goes so far that some missions are just a big smoke screen. They cannot be lost; their purpose is just to show plot point X occurring. 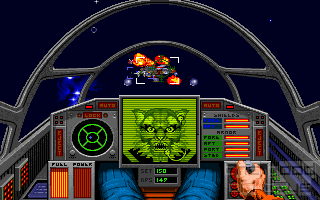 Oh, yes, there is space combat as well

In terms of dramaturgy, this may be necessary, but this is, after all, still a game. Vengeance of the Kilrathi comes dangerously close to disempowering its player a couple of times too many, but finally does not breach this threshold.

These days, you won't even have to sit in front of your PC for more than one hour just to get it installed anymore. You can get the “speech pack”, which Origin sold separately in an attempt to further milk the customers, and which nevertheless only makes a small fraction of the dialogue audible, bundled. The mission structure may not be on the level as offered shortly thereafter by X-Wing or Tie Fighter, but it's an entertaining game. Whether it will hold your interest all through both the additional mission packs which followed, questionable. If your interest comes from an historical point of view, you owe it to yourself to play it anyway. After all, this is where Wing Commander began proper.

SavageThor:
My disk 7 since I was a kid have been corrupted. I have never been able to play.
Moebius:
Feel free to share anything about Wing Commander II: Vengeance of the Kilrathi (1991) here!
[Reply] 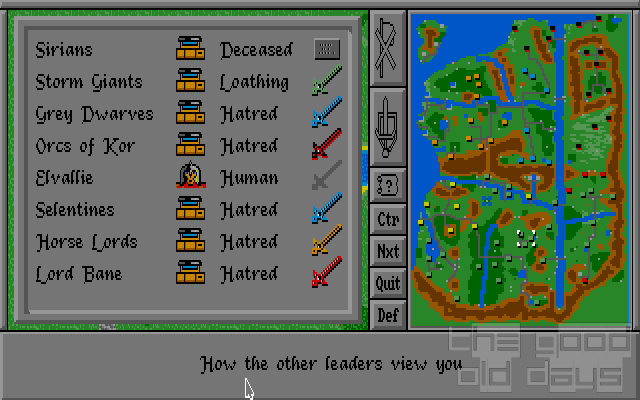