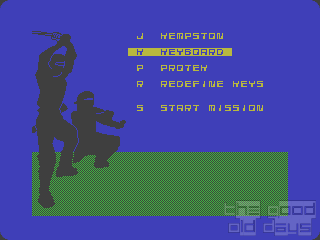 Of all Spectrum games, Saboteur was one of the most unique and entertaining ones. Unlike most Spectrum games, it was neither pure action, nor a text adventure, and not even an arcade. The game was a blend of action and puzzle; quick thinking was more important than quick fingers, and keeping your cool was they key to success. Good memory or at least decent mapping skills were not useless, either.

In Saboteur, you played a ninja with a task to blow up a facility. While you could always use the standard kick and star throwing to dispose of the guards and their dogs (with an occasional ceiling gun), the key to success was avoiding the guards. Your main enemy was time; you've had 90 seconds to plant the bomb and escape the facility; killing anybody in the process was a waste of time. The facility itself was a big maze of sewers, storage rooms and guard posts, all connected by corridors and ladders. Your character has a health meter that dropped whenever he was hit, but regenerated pretty quickly once out of danger. Only this made the game playable.

On the engine and graphics side, this was a standard Spectrum 48k game. It featured eight colors, with each room having its own 2-3 color scheme. The game was portrayed as a platformer; all characters unusually large, in order to accommodate their fancy moves. You could walk, jump, crouch, kick and throw ninja stars, with the added benefit of long jumps in either direction, courtesy of key combinations.

I still remember spending days to play this game, failing to finish it. My Spectrum was on all the time; I wanted to save myself the five minutes it would take to load. The key to success, as it turned out, was mapping. I played the game over and over again, in order to map an always larger portion of the maze, until I knew exactly what to do. Even so I ran out of time plenty of times before becoming familiar enough with the route I had to take to finish in the nick of time.

Saboteur was one of the most unique games ever created for any platform. Followed by an even larger second part (which put a little too much emphasis on fighting), the game was highly addictive and highly successful. It is a surprise that nobody has ever taken this concept and attempted to create a similar game for the PC...

So much for the remake: face-lifted frame, instructions and demo mode

the game:
search SABOTEUR.Z80 in google and play that game in a Spectrum emulator.

Big G:
this game could be the grandady of Metal Gear. it would give MGS a run for it's money any day. I just cant be bothered to wait for it to load...lol
g:
saboteur was a great game. i only ever played it on the pc, hence i am looking for it. i want it back!
NetDanzr:
Feel free to share anything about Saboteur (1986) here!
[Reply] 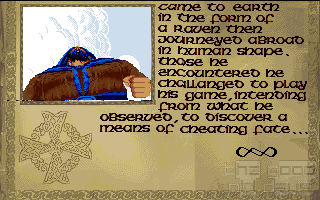