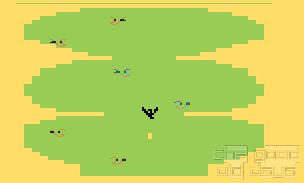 Torr and Tarra, heroes of Earthworld, immediately feel the urgency when entering Fireworld. Taking some water here may have been a good idea. Good thing that at the end of this adventure, a chalice promising an endless supply is waiting for them. 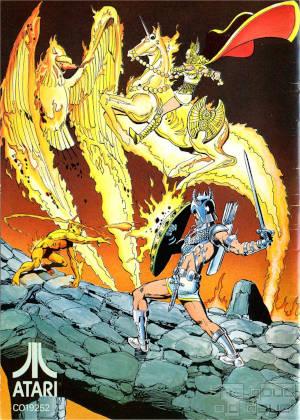 Atari must have felt the urgency as well. The first Swordquest game, accompanied by the real-life contest around it, had lead to a huge buzz (see the Earthworld article for a general overview about that). A second game had to be released as soon as possible. Fireworld, unfortunately, is a step backwards in several respects. Starting off from a not too great status in the first place.

The first impression is once again provided by the accompanying comicbook, however. As in the last issue, one third of the pages is wasted on an uninteresting flashback serving just to illustrate once again what all readers already know: the king and his mage advisor are evil. Surprise, surprise. The twins then face “fire goblins”, a phoenix and few other thematically semi-appropriate creatures. Finding cool looking armour and weapons in the process.

The game itself, on the other hand, shows all the signs of having been rushed out. Where the previous game greeted its players with an excellent title screen, this one just shows some re-used animations before dropping the player into the first game screen. Which immediately sports an awful, low contrast colour combination. The protagonist sprite has been reduced to one colour. And it goes downhill from there. 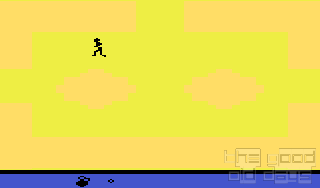 Every single room will now trigger an arcade sequence before giving access to the room objects, which may be considered an advantage on the drawing board. In the predecessor, my complaint was about lack of originality, but here, they border on unplayable and beyond. There is one in which you play a bird shooting snakes, for whatever reason. That is the only manageable one, even quite easy.

All the others are either about catching or avoiding approaching objects. Sometimes, you control a “thing” on the bottom of the screen, sometimes you control the heading of the “things” dropping from above. Poorly drawn, in many cases unidentifiable sprites flicker in and out of the visible spectrum at random. They are so close together or so far apart that the tasks at hand are essentially impossible unless you just get lucky. Remember: even to drop objects in order to try and receive a competition solution clue, you will have to beat these action scenes every single time. It becomes tedious in no time! 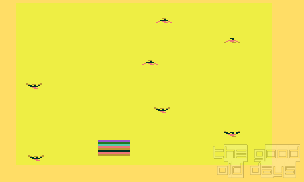 Not sure how I'm supposed to catch them all

A number of bugs further mar the experience. The most grave one: even when finding the intended random object per room combinations to reveal the competition clues by pure chance, those clues are not useful at all. They are just numbered from 0-9, giving no indication where in the comicbook the corresponding words could be found. To actually win the competition, the only way was therefore to carefully search the comicbook panels directly and then take a guess which ones Atari wanted to hear.

Nevertheless, thanks to the broad hype by then, the number of contestants increased significantly. Instead of eight, more than 70 people found the correct solution. 50 were allowed to enter the live competition and a real gold chalice was awarded to the winner. In marketing terms, Swordquest was at its pinnacle. Though Fireworld was the beginning of the end… 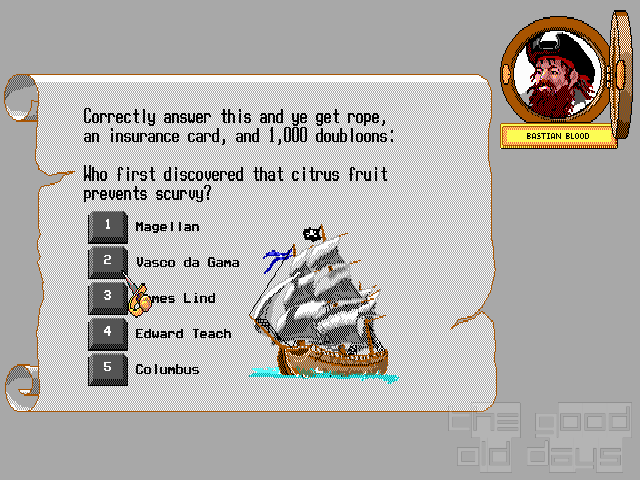