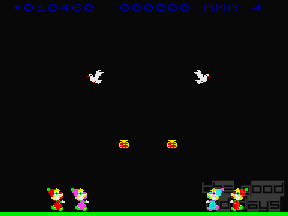 The idea of clowns shooting each other up with seesaws and trampolines is not new. The theme has appeared in arcades since the 70s and has also been transferred to various home consoles. In the 8-bit realm, Comic Circus is by far the best version I know of. However, the console called Super Cassette Vision, which is almost only known in Japan, also came to a tiny degree of fame in Europe through a temporary export collaboration with France. Despite the name Super Cassette Vision, by the way, modules were used as the carrier medium.

The game is played with a joystick. The controls are very simple: only right-left movement. Only the selection screen at the start with the game options is operated via the small ten-number input pad on top of the console. In the game, up to 4 clowns act simultaneously under the circus dome. The multiplayer mode is also designed for just as many players. Unfortunately, this is just a less exciting hot-seat variant in which the players simply fight for the high score one after the other.

The 3 levels rotate after playing through them, but they differ not only visually but also in terms of gameplay. 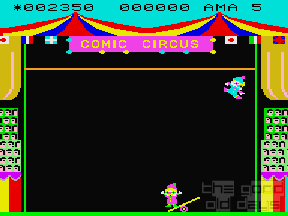 Level 1: two clowns on a seesaw on which they take turns catapulting themselves upwards.

Level 2: with a trampoline held by two clowns, a third jumping clown must be kept in the air as long as possible.

Level 3: at the circus dome, 2 clown acrobats swing upside down and grab the jumping clown, who can hold on to their outstretched arms and then swings along. To release the clown from the hands of the hanging acrobat again, the fire button on the joystick is occasionally used here. The actual interaction of the joystick is – as in the other levels – to move a fourth clown back and forth with a single trampoline at the bottom of the screen.

After each level, a short intermediate screen appears in which a few of the circus figures shown in the level briefly march through the screen.

To keep the game challenging in the long term, a second difficulty level has been added, but it is actually only a little faster.

A special feature is the scoring in the game. In the broadest sense, there is a similarity with Breakout. The only difference is that there is no clown, but a ball that oscillates between the upper and lower half of the screen. The ball generally removes obstacles and thus collects points. In Comic Clowns, however, such obstacles – in this case balloons – do not earn points directly. Only the balloons that remain after the level is completed are counted and added to the score. Once all the balloons have been hit and disappeared from the screen, you don't get any points. Fortunately, however, they reappear after clearing the screen. 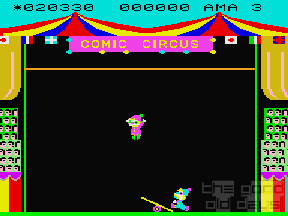 The actual targets of the clown throwing attacks are not the balloons, but a series of white birds (pigeons?). These are “unlocked” one after the other by touching them, so that the respective bird starts to fly around the level. When this bird is collected, the next one takes its turn. From time to time, the birds also drop small yellow money bags, which also bring points.

There are a few reasons why I have chosen Comic Circus as the “best” Circus version right from the start. This is not only due to the described variety in the level structure and the interesting bird component in the scoring. Rather, the cuddly and very cute graphics immediately catch your eye. The circus figures shown are all lovingly drawn and have fluid movements. Graphics that not only appeals to children, but objectively bring out really amazing details from the 8-bit console.

Clowns who shoot up high stagger briefly at the top of the taut rope before plummeting back down again. Clowns don't just suddenly appear in the arena, but come marching in from the side or hanging on a wheel, balancing on a rope. Birds still waiting to perform on top of the rope also elegantly dodge an approaching clown to the side. All of these animations take the static out of the game and transform the action into an attractive overall picture. The background music is a lovely chip tune that creates a circus atmosphere. In addition, an FX sound is played when collecting the birds or touching the balloons. 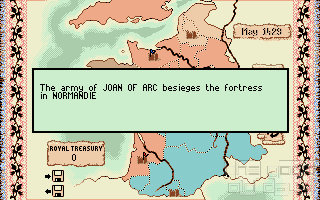