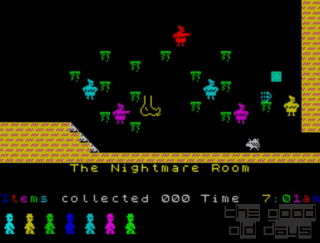 Having acquired vast riches from his previous underground explorations, our hero, Miner Willy, buys himself a 60 room house and starts living la vida loca. To kick off his new lifestyle he throws a huge party at his mansion and, though we don't know exactly what happened, things must have gotten pretty wild in there. As the game starts it's 7 a. m. and we find Willy (who has traded his old miner's gear for a fancy new hat) in his bathroom, presumably nursing the mother of all hangovers, because it appears the toilet seat is trying to talk to him. Or maybe it's just trying to eat him. Willy doesn't care. He just wants to get some sleep, so he wanders off to his bedroom. But just as Willy is about to climb into his huge bed, his housekeeper, Maria, shows up. Pointing an accusing finger at our hero, Maria lets it be known that there will be no rest for Willy until he collects all the garbage his guests have left scattered around the house. And that's all there is to it, really. You have the explore this massive, labirynthic house of yours and collect all the flashing objects (about 80 of them) before Maria lets you go back to bed. You have to do this before the stroke of Midnight, or you'll die of exhaustion (or maybe turn into a pumpkin, or something – I don't know, actually – I don't thing anybody has ever made it to Midnight).

The problems start when you realise that your house is infested with all sorts of weird creatures. And they're not just your usual platform game baddies. Sure, there's the odd alien or two roaming around for good measure, but most of the time you'll be up against Swiss army knifes, crazy chefs, dancing rabbits, frozen penguins, and even Monty Python feet. There's no way to kill these creatures, so you'll just have to avoid them while trying to get to the objects you need. And believe me, that's not an easy task. The design of some of the rooms is fiendish to say the least, and the objects you need are usually well guarded. Add to this the massive size of the house (over 60 rooms to explore - unthinkable on a 48K machine), and the fact that you can't save your game, and we're looking at a very tough challenge indeed. So tough, in fact, that Software Projects offered a case of Champagne bottles to the first person to prove to have completed the game. The prize was tempting, but it was soon realised that nobody was going to win it without some amount of cheating.

A few short weeks after it was launched Jet Set Willy had become one of the best-selling computer games of all time. As hundreds of thousands of players were busy trying to complete it the hard way, hackers turned their attention to the game's code, trying to figure out alternative ways to beat it. For months, the computer magazines of the time were flooded with letters about Jet Set Willy, some crying out for help, others offering assistance and ways to hack into the game to make it a little less difficult. Over a year after it first came out, there was still talk of secret rooms and hidden features in the game. It's hard to imagine nowadays, when games seem to grow old so fast, how such an apparently simple piece of software could capture gamer's imaginations for so long. For years, modified versions of Jet Set Willy continued to appear and if you look around the web, you'll still find people creating their own versions of the game.

The fact that Jet Set Willy was a technical achievement explains some of its success, but for the most part it's programmer Matthew Smith's twisted genius that shines through. There's a definitely surreal atmosphere to the game as you wander around your eerie mansion, being chased by the most unlikely creatures imaginable, while a creepy (in more ways than one) rendition of If I Were a Rich Man, keeps playing in the background. But the cherry on the top of the cake was still to come: just as Matthew Smith had gained cult status, and everyone was eagerly waiting for his next games, somewhere in 1985 he simply disappeared off the face of the earth. Just like that, he vanished. Naturally, all sorts of rumours started coming up: that he had had a nervous breakdown, that he had been abducted by aliens, that he had gone off to become a monk, etc., etc. Apparently, nobody knows what really happened to him, and even to this day people claiming to be Matthew Smith turn up on the web every now and then. All this, of course, only added to the game's popularity, but even without this final twist of fate, Jet Set Willy had already earned its rightful place as one of the Spectrum's greatest games ever. 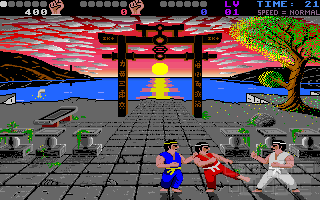