Alone in the Dark
for PC (DOS) 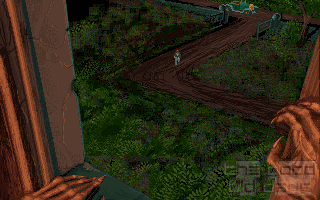 One of the first games to ever give me any type of unsettling feeling while playing it, Alone in the Dark's driving force is a dreadful atmosphere. The graphics for the time were impressive, though not earth shattering, and have not aged well in the least, by modern standards. However, as stated prior, this game does not rely on graphics for its presentation, as much as it does atmosphere, partnered with eerie sound effects and music.

The game starts with the owner of Derceto, a haunted mansion in Louisiana, having committed suicide. You play as either Edward Carnby, a private investigator hired to retrieve something from the mansion, or Emily Hartwood, the niece of owner who is determined to find out what exactly happened to her uncle. Gameplay boils down to exploration and puzzle solving, with very little combat. The pace is slow, and dreary, and with the combat system being very archaic and clunky, it's quite good that it wasn't a prominent feature of the game. Some enemies don't even require combat to be defeated. Instead, you'll be reading notes, books, and journal entries to piece together clues that will allow you to advance through the plot by solving various puzzles through the mansion.

Character and monster models are extremely low poly count, with many sharp edges. However, the sound effects and music are still rather effective to date. Eerie creaking of wooden floor as you walk through the empty halls. The unsettling music clip that randomly chimes throughout the game as you explore, along with a combat theme once spotted by an enemy, all hit the right notes. The sound quality isn't great by today's standards, but was adequate for its time, but again, is good enough to still be effective today.

The game itself can be finished in very short order for experienced players, however, first time players will likely take a little a few hours with it to piece things together and progress through to the end. The plot is typical and cliche, but the journey through it is quite fun and memorable. Anyone who is already a fan of this game, certainly has their "Oh!" moment, when recounting the game to friends.

Controls are fairly clunky overall, but they get the job done. With this game having been made at the point where computer games still mostly consisted of menu or mouse driven strategy and crpg games, it's expected to have some bad 3D controls by today's standards. Running is particularly annoying, as it involves double tapping the forward key in order to run. The problem with this is, the timing is dependent on the CPU speed, and on faster machines than the game is slated for, the double tapping to run, can be entirely impossible.

All in all, even though the game is 25 years old at the time of this writing, I still recommend it to anyone who loves survival horror, and is not easily detracted by dated graphics. It still has something to offer. This game is a gem, and a major influence on many survival horror games of today, including the ever popular, Resident Evil. Give it a try if you can get your hands on it.

This game is loosely based on H.P. Lovecraft's works. So you can expect a decent horror atmosphere. And that's what the game is all about: the atmosphere! It is created mainly be the presentation. The graphics are an attempt to be as movie-like as possible. You're playing in third-person perspective. The perspective changes depending on the spot where your alter ego stands. You are of course always visible, but from different directions and angles! When walking around you sometimes have the feeling of real movie-cuts.

The sound, even though not too great, also adds to this. The music changes according to the situation and the some nice hall-effects do the rest.

The gameplay isn't that innovative. Controlled by keyboard (which works really good considering it's all 3D!) you walk around in the doomed house full of monsters and pick up everything that's not nailed to the walls. The monsters (mainly zombies) can be fought with bare hands and feet but you'll also find some weapons (e.g. a shotgun and a sword) later.

These action scenes dominate the game most of the time. But there is also quite a number of puzzles! They aren't too complex or hard though. And some also aren't required to be solved. They only save you a few fights.

The hardest thing about solving this game is finding some tiny items hidden in dark corners. Other than that Alone in the Dark is a very easy and short game! And that's its biggest problem! Most fights are a piece of cake, just like most puzzles. And the pure number of locations is also very limited! Solving the game in just some hours is very well possible.

Everything that's there is great: The atmosphere, the gameplay and the story (which is kept alive by books and diaries you find during your search). But there's just not enough of it! Still, it's the best part of the series because it's both fair and not completely action-dominated.