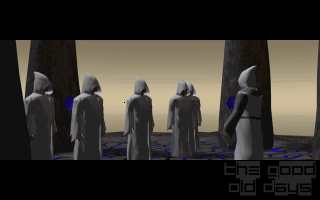 The Fantasy genre. Not exactly a haven for innovation. Ever since Tolkien's Lord of the Rings has been released in 1954, most authors have tried to imitate his style. Standards are set, the fans can't seem to get enough of these stereotype stories and characters.

Why is fantasy so popular? Many people are longing for a world, where everything's still in order. A highly structured world with clear borders and everything's good. Well, not exactly. There's always an ultimate evil threatening the harmony. But good is good and evil is evil - and evil can be seen on the evil ones' faces! And did they ever stand a chance against the overly good heroes?

Not only evil can be seen with the blink of an eye. The 'races' established in the fantasy world are also linked with certain character attributes. Dwarfs are strong and stubborn, Elves are wise and elegant, humans are warriors and hunters. No exceptions to the rule, easy to understand. No complexity, just what people want!

In the computer gaming world, fantasy backgrounds are normally used in RPGs and sometimes strategy. Classic Adventures are normally not so good for it because Adventurers don't want any kind of fights in which they can die - that'd be against one of the basics of the genre. But there are exceptions of course. Legend Entertainment used fantasy stories more than once. And Death Gate is one of the results.

Attentive readers have of course already noticed from the name that this game is based on a cycle of novels written by Tracy Hickman and Margaret Weis. Compressing seven novels into one game? Hardly possible. So the game designers had to leave out a lot and change some things of course. You won't find Alfred, the second lead character of the novels for example. But they kept the essence, the basic story. It reads as following:

Two thousand years ago, a war between the two magical humanoid races - the Patryns and the Sartan - took place. The Sartan managed to win by magically sundering the world and thus banishing their arch-enemys into one of the parts called the Labyrinth. The Labyrinth was meant as a prison to 'rehabilitate' the Patryns. The other four realms were populated by the 'mensch' races: Humans, Elves and Dwarves. These three are 'lower' life forms, even though some of them are able to cast spells, they don't come anywhere near the potential of the other two races. The Sartan ruled over the realms, but somehow they disappeared mysteriously.

The Labyrinth grew conscious and it started torturing and slowly killing the imprisoned Patryns. But Xar, the Patryns' lord, found a way out and freed more and more of his people by leading them into the Nexus, a kind of city from where the Sartan were supposed to watch over the Labyrinth. Amongst the people who escaped is Haplo, a young Patryn, the protagonist of the story. The lord's plan is to reform the world, conquer the realms and take his revenge for thousands of years of imprisonment. But first, he sends Haplo to scout the four realms to do military reconnaissance and search for the Seal Pieces, magical symbols which are needed to perform the reformation. The only way to go from one realm to another is the Death Gate. But it can only be passed with a flying ship which has to be magically prepared.

The full story unfolds on Haplo's journey through the realms. First, he visits Arianus, the world of air. Then Pryan, the world of fire. After that he travels to Abarrach, the world of stone, and to Chelestra, the world of water. Finally, he even has to return into the dreaded Labyrinth and eventually into the Vortex, the place where the world was divided from! In each world, Haplo learns more about the full background: the Sartans' disappearance, the logic behind their plan to split up the world, the situation of the mensch and so on. He also learns a lot about his own race. And suddenly, he finds himself battling a much greater evil than the Sartan, an evil which lets the Patryns' and Sartans' godlike ambition look ridiculous...

Each realm has its own characteristics, they live completely seperated from each other. In fact, most people don't even know other realms exist! For two thousand years, they have developed completely independently from each other. So there are always different situations, different people, different backgrounds. And each world is really interesting! I don't want to spoil too much here now, but the story developes into directions you couldn't imagine at first!

The game uses the 'modern' incarnation of Legend's Adventure engine. The screen is seperated into a main window showing the setting (mostly static) an inventory on the bottom and verbs on the side. You don't see the protatonist, but through his eyes. That could be a bit confusing to Lucas Arts or Sierra players at first. But it's working great! No endless waiting for the player sprite to arrive where you want it (Hi, Sierra!).

The game is very close to classic text adventures in style. There is no parser anymore, and everything's done by clicking on icons and on the graphics, sure. But many elements remind of the 'golden age' of adventures! For example the non-static verb list: depending on which item you want to manipulate, specific verbs for it appear on the sidebar. That way, you don't just have to 'use' everything (Hi, Lucas Arts!), but be a lot more specific. That adds to the difficulty level, but in a positive way: You have to be sure what you want to do exactly, just trying everything out will only rarely get you anywhere.

The player has every comfort he can think of: a graphical inventory, movement commands by directions instead of a confusing door-system, a map and last but not least great descriptions. These are one of the strongest points of the game. The write-ups are very well done, 'examine door' won't just cause a simple 'it looks like an ordinary door', but you'll be rewarded with a detailed description and evaluation of the object! The same goes for actions, situations and so on.

Conversation is one of the points in focus. There are always people to talk to and they have a lot to say. Most of the background information is carried through these conversations or through books which are lying around. Both game elements also contain a lot of hints to the puzzles. So there is a lot to read, the player has to be a bit patient there. Death Gate is a slow game, anyone who wants quick progress will be disappointed. But everyone who takes the time will be rewarded with stunning depth!

Ok, many story elements are just cliches. But in contrast to most fantasy stories, Death Gate has some real characters. Sure, their basic personality is again based on the stereotypes of their 'races', but this game doesn't stop here like most do. The characters are believable, their actions are logical according to each individual's way of thinking. And that's already more than computer gamers are used to. Sad enough...

Each setting only has a few screens, there is no endless wandering through empty locations like in the King's Quest series for example. The game is linear enough to let the player know what exactly has to be done next. But the puzzles themselves are challenging enough to keep him on the screen for a long time- Some games try to hide the lack of creative puzzles by confusing the player. Death Gate doesn't have to hide its puzzles, because it has some of the best ones ever.

Aside from the normal inventory-based manipulations, there's also a 'new' kind of puzzle. Haplo is a Patryn, he has magic in his blood. And he has to use it quite often. Now magic is normally just a poor excuse when the designers didn't know another way out of the situation but an impossible one. In Death Gate though, magic is implemented into the world with a clever trick: perfoming a spell is nothing else but transforming a possibility into reality. As it is put by one game character: 'Imagine an impassable river. There is the possibility that there could be a bridge. The sorcerer does nothing else but take this bridge from the dimension of possibilities to reality.'

In consequence that means that nothing against natural laws can happen, not even by magic. Don't forget what you learned in your science classes, you'll even need it here. The spells themselves are done by rune magic. On his journey, Haplo always learns new spells which he has to use when appropriate. But carefully, because magic can also do a lot of damage. There's a comfortable editor which builds known spells automatically once you choose it from a list, but you can also put the runes together manually. Why you should do that? Play the game and see...

Graphics are hand-drawn, you can choose between standard VGA and SVGA (640x480 resolution). Most pictures and portraits are very pretty, they fit the atmosphere of the situation perfectly. Next game designer who uses 3D Studio for a fantasy game will get a 'personal visit' from me.

Sound mainly consists of speech. That's right, every conversation has been recorded. The voice acting is well done for the most part, but unfortunately, some voices sound extremely American. There are also a few rendered video sequences which look nice, but not great. For some reason, those even look better playing in VGA because the switching between the static pictures and the videos goes without changing the resolution then, i.e. more smoothly.

This rip (which you have to put into C:DGATE to run) contains only VGA resolution (including videos) and no speech. By all means, get an original version if you can. Only then you'll see how the characters' mouthes even move completely synchronous to the speech.

On the whole, Death Gate is a real and true classic. It's exactly the style Infocom would have developed to if it had survived. Challenging but logical puzzles, deep characters and plot (and even if I'm repeating myself here: I'm no fantasy fan!), great graphics, extremely fair (in case you die there's always the undo option...), very long - even replayable. Only a few minor downpoints exist, most noticably the annoying Gandalf-clone 'Zifnab' who is supposed to serve as a comic relief. But he's just silly, nothing else. Ok, nothing can be perfect. The main part of this game is.

A serious Adventure, a very rare species. That alone would make it worthwile. Death Gate doesn't need this curiosity bonus at all though.

Note: The German version has German texts, but English voices.

When you said that Death Gate is a game Infocom would make if it survived - you were perfectly right. The game IS the famous Infocom's Interactive fiction. Why? Because when Infocom 'died' two of its most important game designers founded - the Legend Entertainment :-).

Death gate is one of the best games I've ever played!
I really like the story and the voice-acting. 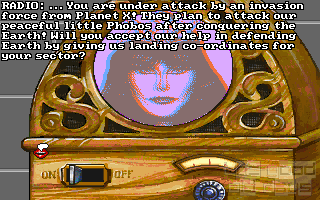