Legend of Kyrandia
for PC (DOS) 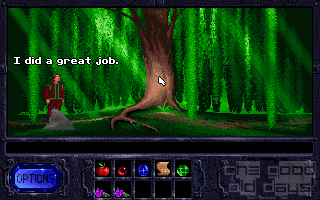 Easily one of my all-time personal favorites, The Legend of Kyrandia features stunning artwork, gorgeous music and an incredibly user-friendly environment.

The story is simple: Malcolm, the evil jester, has escaped after 18 years of imprisonment for murdering the king and queen. Wreaking havoc on the land, he threatens to destroy Kyrandia once and for all, unless Brandon, rightful heir to the throne, is able to defeat him.

The first entry in the Fables & Fiends series, and Westwood Studios' first foray into the world of 3rd person point-and-click adventure gaming, The Legend of Kyrandia is easy to play yet will prove a challenge to newcomers. Many of the tasks are trial-and-error based; supporting characters will often give you just enough hints to get started, but it's up to you to figure out what to do with those hints. The solutions won't be handed to you on a plate - you'll have to deduce what comes next yourself. There's also a complex labyrinth segment which will require mapping. In many ways, Kyrandia plays like a text adventure with graphics, which is fitting, considering the title is based upon a text adventure.

If you're willing to give the gameplay mechanics a chance, you'll be rewarded by the sumptuous atmosphere. The Legend of Kyrandia features some of the best pixelart of all time, and Frank Klepacki's incredible score perfectly complements each area of Kyrandia. The numerous characters also prove a delight - from the sinister evilness of Malcolm, to Brandon's constant moaning and groaning, to the diverse personalities of the four Royal Mystics (noble Kallak, patient Brynn, befuddled Darm and wisecracking Zanthia), colorful characters are peppered throughout your journey.

Though it may not be as complex and layered as many of Sierra On-Line's many titles, this little gem is well worth your time and effort, and is a must for anyone who enjoys escaping into worlds of beautiful fantasy.

The evil jester Malcolm has escaped from his prison. Now he's draining all the magical energy of the realm. None of the court magicians can withstand his powers. As a sign of extreme evil, he has turned Kallak (one of the elders or something) into stone.

That's where Brandon (the player) enters the scene. Being Kallak's grandson (at least everyone thinks he is...), he's of course a bit sad about his old man being so stone cold to him. When he has finally come to accept it, a talking tree (which hosts his house btw) approaches him and gives him the mission to stop Malcolm. The humans don't seem to be that concerned. After all, it doesn't matter for most 'normal' people whether a grumpy old king or a mad jester rules them! But Malcolm is committing some kind of genocide to the plants, so they chose their champion: Brandon.

Not even thinking about the possibility of a bad joke (his fellow college students played a lot of evil tricks on him already - will he ever learn?), Brandon starts searching his own one-room house and finds....tata....a blank piece of paper! This great discovery washes away his last piece of doubt of course.

As you might have noticed, I can't really think of anything positive in this story. And it remains the same during the whole game! And don't tell me Brandon's true personality is a twist because it isn't. Oops, did I just spoil anything? Too bad. You won't miss anything not playing this game anyway. I'll tell you why.

Westwood is known for simplifying genres. So they also tried that for Adventures. The controls are as simple as it gets: point&click using just one button. Going, taking, talking, using,.... everthing's done with a simple click. Oh, great! How simple and genious! And how does this affect the puzzles? With such 'flattened' controls, they can only be the same: flat. Boring. Extremely easy. Just click everywhere, the game automatically chooses the correct command. What is the player here for anyway? Certainly not for much interaction with the game...

To prevent the player from 'solving' the game in some minutes, Westwood implemented some nasty 'features' to live with. First of all, the inventory is limited to ten objects. That means you have to drop stuff all the time only to find out that you need it half an hour later. When the cursor moves around the screen, there's also no sign when it touches an object. So all you can do is click everywhere wildly until you hit something the programmers found important. Happy pixel hunting! The locations have the tendency to be maze-like.

And then there are a lot of dead ends and ways to die! For example if you click on a tree to get a ruby you need, you're bitten by a snake and some seconds later you're dead. Ok, there was a 'Danger' sign there, but does it have to be that fierce? The lack of an undo option makes you pray you saved not so long ago! But I could even forgive that flaw if there weren't those dead ends you're not told about! That's right: some actions make the game unsolvable, but the player isn't notified of that. So you play on and some hours later you'll maybe ask yourself why you don't make any progress anymore. An example of this from the very beginning: you have found this seemingly blank piece of paper and you need to find a way to make the writing visible again. Thinking it might be written with some magic ink which only shows up when it's hot, I wanted to hold it near an open fire. Click on the paper, click on the fire. It burned! The interface which doesn't let you specify what you want to do exactly also played a questionable role here. But the main point is that I had to start again because there was no way of getting the paper back!

As I pointed out, this engine is a piece of crap! But still it's interesting from the historical point of view. The Kyrandia series did pretty well in the stores (why? Why? WHY?), and many others companies adopted the controls scheme (one allround click). So The Legend Of Kyrandia was a very influential game. But it was a bad influence...

Probably right, we are looking at this game with Nostalgia tinted glasses, but it is still magical for me.
I still remember the first time i laid my eyes upon it, on an Argentinian Magazine called PC JUEGOS back in the day. The intro sequence, when Malcolm spies Kallak trough the window conviced me instantly. IÂ´ve never seen anything like that before. Although i loved Indy and Guybrush, this game opened a new world for me.

Mr Creosote:
Nothing wrong with that

SB1988:
Originally posted by Mr Creosote at 08:35 on July 11th, 2017:
These games seem to be held in high regard generally. I'm just wondering how many of those admirers have actually played them in the last ten years or so and how many are just quoting from memory.

I'm sure many view them through the nostalgia filter. I just replayed them a few months back. I guess because I've long since memorized everything there is to do, I've learned to overlook its design shortcomings. It's the look and feel of everything that keeps drawing me back in.

Mr Creosote:
These games seem to be held in high regard generally. I'm just wondering how many of those admirers have actually played them in the last ten years or so and how many are just quoting from memory.
SB1988:
Originally posted by Mr Creosote at 07:06 on July 11th, 2017:
Ah, so they both share the same plot in fact. My opinion of these games has taken yet another blow.

I like your comparison with old text adventures, by the way. Seeing many of the design choices, this seems spot on.

The basic plot of the third is similar to the first, yes (Malcolm escapes from somewhere, wants revenge). What sets the third apart is the wildly sillier tone, plus Malcolm wanting to prove his innocence, not just wreak havoc.

I enjoy reading all the different points of view here. I know the Kyrandia games are not for everyone, and admittedly it's the characters and environments that keep me coming back to them more than the game design. It's nice to have places to compare opinions like this.

Ah, so they both share the same plot in fact. My opinion of these games has taken yet another blow.

I like your comparison with old text adventures, by the way. Seeing many of the design choices, this seems spot on.

SB1988:
Originally posted by Mr Creosote at 17:49 on July 10th, 2017:
Quote:
The story is simple: Malcolm, the evil jester, has escaped after 18 years of imprisonment for murdering the king and queen.
Hm, my memory is a bit hazy on this one, but isn't this the setup of the 3rd part rather than the first one?

Mr Creosote:
Quote:
The story is simple: Malcolm, the evil jester, has escaped after 18 years of imprisonment for murdering the king and queen.
Hm, my memory is a bit hazy on this one, but isn't this the setup of the 3rd part rather than the first one?
Wendy:

I was surprised by the fierce review, too.

I thought Kyrandia was the best game I've ever played. I was charmed by the setting and the characters and the plot line. (Oh, to live on Kyrandia.) And I particularly enjoyed the lack of cumbersome interface that allowed just a click to initiate action.

The graphics were mouth-watering and enticing and the music added another dimension to this already fulfilling experience.

Still, I was interested to read a contrasting opinion.

I had a great time playing this game.
The music is very good. I DID like the puzzles and the story. Inventory objects that you somehow lose or destroy are a lot of times spawned again somewhere else.. I dont really agree with all the criticism. I played a lot of adventure games like this, and this is/was one of my favourites.

Mr Creosote:
Feel free to share anything about Legend of Kyrandia (1992) here!
[Reply] 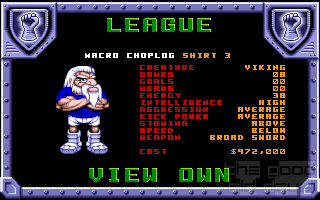