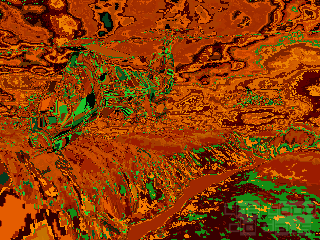 Voxels. What the hell are they? Novalogic made voxels famous by using their Voxel Space technology to create a helicopter sim that out-matched every other sim, graphics-wise. It was revolutionary in a DOS game to have such fidelity, where the terrain actually looked like it was there. Instead of shaded 3D polygons, Voxel Space used point-sprites to create 3D worlds, kinda like a 3D bitmap. Look to a Wikipedia entry for further explanation and graphic examples.

Comanche: Maximum Overkill introduced the next-step in graphics enhancements for games during that period. And it did so without needing you to upgrade your system to insane specs either. It typically ran well on your average-to-decent system, typically not true of next-gen graphics games. Ask anyone who tried to run Strike Commander (Origin Systems, DOS flight sim) on a 386DX-40Mhz… you really had to spring for that 486DX2-66 upgrade to enjoy that game. The graphics still work today, you’ll just need to forgive the resolution limit of a DOS game.

The actual Boeing-Sikorsky RAH-66 Comanche was the Army’s chance to replace a few aging helicopters, but was canceled and only a few prototypes were made. That might be a good thing for this game though since it is much more of an arcade game than a true flight sim. That'll knock off a lot of points with your nose-in-the-book air jockey, but not me. Sometimes you just want to shoot things without knowing the best “angle of attack” or what radar systems to avoid at what altitude. Comanche appeals to a larger market that want to quickly get up in the air and start some mayhem without having to read a 400 page manual just to taxi on the run-way (Falcon 4.0).

Missions of the game are pretty cut-and-dry. You have a designated main target and secondary targets. Some of the targets are other military units like helicopters, tanks or warships. Other mission targets include oil refineries and other critical structures.

The controls are easy enough to learn. Since the game isn't a true-to-life flight sim, flying around isn't difficult. The helicopter stops on a dime, and moving the helicopter around is as simple as moving the joystick (if you have one). The flight model really is that simple. Almost too simple, but this is an arcade game at heart. If you want realism in a helicopter sim, play Jane's Apache Longbow (a very kick-arse helicopter sim)

The on-board weapons load-out include rockets, laser-guided missiles (ground targets), stinger missiles (for aircraft) and a 20mm cannon. You can also call in artillery fire for ground targets that are grouped together or for heavily armored structures. Even though your wingman isn't much help, you can ask him to destroy a current target. For defensive mechanisms the old standbys of flares and chaff can come in handy.

The game does start to leave you wanting more though after a few campaigns. The missions aren't all that varied, very little background story, and your wingman is next to useless. The enemy is like GOD himself at times, knowing exactly where you are, how to avoid you, or sending missiles your way even though you're hiding in a canyon or behind a mountain range. This is where I'm taking a point off, that and lack of realism of the game map. You never see a road and the terrain, though gorgeous for this early of a DOS game, is cartoonish in contrast and color.

If you want to see what a jaw-dropping graphics showcase game was back in the day, with some fun gameplay, then play Comanche. Just know that you can't have an extended/expanded memory manager running in DOS and that this game isn't a true flight sim.

I'm giving this a 5/6, just for the pure graphics candy game it was. If it were based on realism of the simulation, this would garner a 2/6. Just go blow shit up and smile and don’t worry about your inadequate flight model.

Normally, I don't like flight sims. They're usually overloaded with options to make it feel 'realistic'. So when I try one and I'm not able to take off without extensive study of the manual, I stop playing immediately. But Comanche is different! It's on the border to the action genre. The flight model is not too realistic, the controls have been reduced to the necessary things. I still consider it a simulation though, because it doesn't rely exclusively on fast reflexes, but finishing missions involves a lot of tactics.

The Comanche isn't a flying tank like the Apache. That effects the style of the missions of course. Frontal attacks have only a chance to succeed in the very first missions. Later, the enemy will shoot you off the sky in no time if you show up for too long. So you have to try it another way. As it happens, the commanding Generals are smart enough not to send you to missions in plains, but on landscapes with many canyons and valleys. And here, the Comanche can really show what his strength is: Sneaking up the enemy without being noticed, launch surprise attacks and disappear as quickly as it showed up.

The mission goals are usually to destroy something. In the first missions, it's normally just “kill everyone”, later you're sent to do more specific things like destroy some heavily guarded missile launchers. It's your choice whether to blow up all the surrounding tanks or not then.

But in most cases you won't because the number of missiles your copter can carry is of course limited. There are three kinds of weapons: a machine gun, Stingers and Hellfires. Of course you can use everything against everyone but the specific abilities of these weapons make them more or less suitable for different jobs. Sometimes, you also get some other 'weapons': a wingman and artillery. The wingman just follows you and remains in cover until you order him to shoot his Hellfires somewhere. He can of course also be shot and then his weapons are lost. The artillery works similar: you give the target and some seconds later, a certain area is being destroyed - including you if you're aren't in safe distance!

It's not possible to choose which weapons to take with you before the mission. It's always preset and you have to live with it. There are also no ways to manipulate the helicopter to make it turn faster or whatever. Just one standard model. No need to tweak settings for hours, but also no possibility. This fact will maybe repulse real sim-freaks!

The game is divided into campaigns of ten missions each. They have to be fulfilled in a certain order. Not always really one after another. Sometimes you can choose from three, but you still have to play them sooner or later. But if you're stuck at one point, it doesn't mean you can't even try all the following missions! Winning a campaign, you're awarded a medal. That doesn't have a real function, but it just looks damn cool beside the pilot's name

The thing that made the game popular is something completely different though. It's the graphics! Comanche was the first game to use a 'Voxel'-engine. Voxels are pixels to which a third dimension is added. Compared to the technique which was normally used then (polygons), the results were simply amazing! And it's still very impressive to fly over the mountains in full speed - that's a feeling screenshots can't give you! The only small flaw in the graphics is the lack of real 3D objects. Sometimes there is a bridge or a pyramid, but that's it. And those look really bad!

The expansion packs add many missions to the original ten and some minor improvements are implemented in the second one. In these missions, you can see reflections on the water, there are more different kinds of weather and so on.

Played this when I was a newbie on my DOS box. Tragic when the OS outgrew the game.
Been looking for how to play ever since. 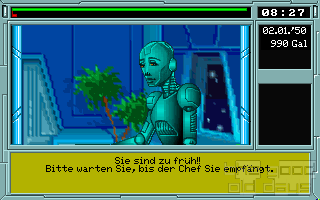